There’s a French-language professional theatre in town, and before À toi, pour toujours, ta Marie-Lou, I had never been to any of their shows.

It’s the typical English-French divide at work. While I’m more than happy to consume French films in the comfort of my own home, a play just seems to be a greater leap of faith. Still, I had heard great things about Théâtre la Seizième’s work, so I plucked up my courage and went out to a surtitled performance of Marie-Lou last week.

Having become a western singer, Carmen returns to her family home, where her sister Manon is living, a young pious and single woman who is obsessed with the tragic death of their parents. Struggling over the need to live and to honour their memory, the two sisters confront each other with different versions of the past and the truth. Mixed in with their discussions are bitter scenes from their parents past. Under the same roof ten years earlier, Léopold and Marie-Lou’s merciless verbal sparring will seal the terrible fate of their love- less couple. Mixing the present with the past, this Quebecois classic, written by one of the province’s biggest icons, lets us see four versions of a singular drama, four faces of an era marked by religion, destitution and the unsaid. 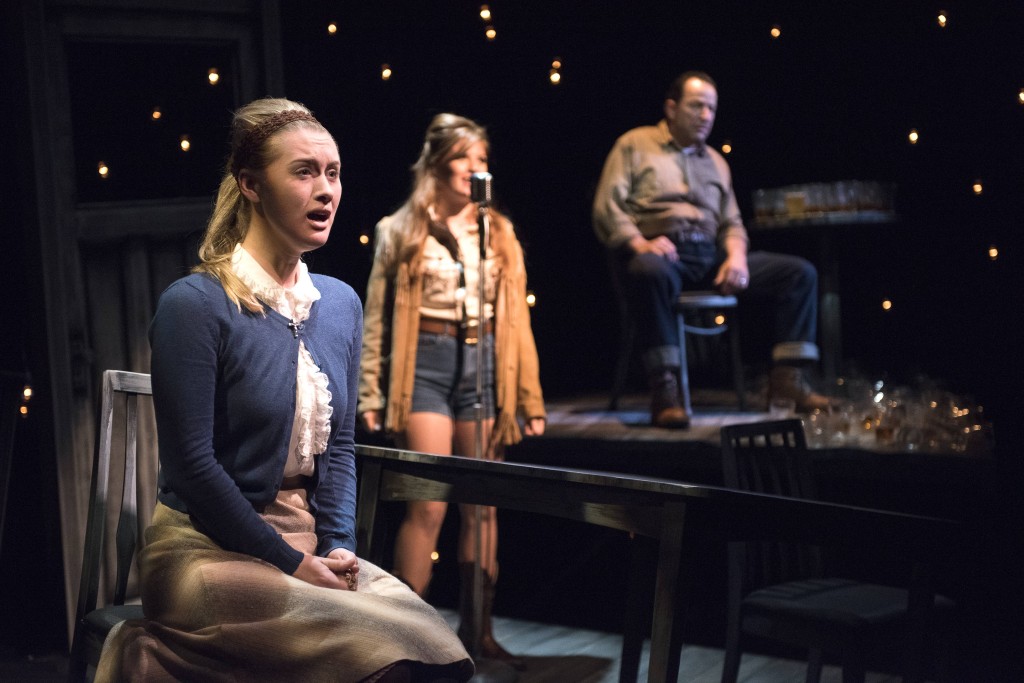 The set was gorgeous. Absolutely breathtaking, and a great use of the limited space inside Studio 16. The actors were all on-par, sharing the stage while shining in their own unique moments. The surtitles were great, and allowed me to keep up with the story while remembering a few scattered fragments of French here and there. The rough-and-tumble small-town Quebecois didn’t need any translation, and carried well throughout the entire play.

My one qualm? Marie-Lou seemed more like a staged reading than an actual play. Some of the intense dialogue exchanges would have been better served acted out. The staging meant the actors had to be mostly static throughout the hour plus performance, without intermission. While they accomplished holding my attention beautifully, I still wonder what the physical element would have added to the performance.

All in all, a good first dip into French theatre, and I am impressed by the professional degree that Théâtre la Seizième holds within their work. I’ll be back for more.