With spring officially on its way, it’s a given that BC’s bear population will soon be waking up from winter hibernation and heading out into the wilderness once again.

The warmer weather also means more people will be getting outside to enjoy what Mother Nature has to offer, and this can sometimes mean that bears and humans will cross paths.

And for those who want the latest status on whether their favourite hiking trail, campsite, or fishing hole is a current bear hangout as well, a handy online tool gives a sense of where bears have been seen, and when.

Known as the Wildlife Alert Reporting Program (WARP), the interactive map comes courtesy of the British Columbia Conservation Foundation, (BCCF) and is meant to give people an idea of where a bear encounter could potentially take place – and take the necessary precautions as a result.

Search results can also be filtered by date, location, species, attractants, the type of encounter, the outcome, and the group/ agency. 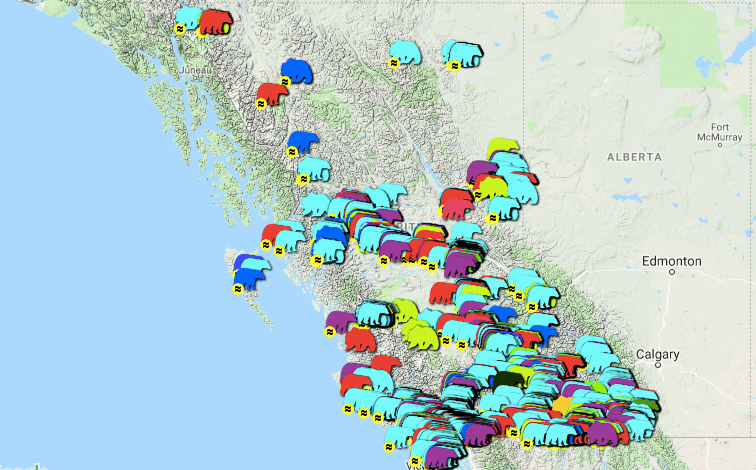 According to the BBCF, the WARP program was developed by WildSafeBC to enable the public to view reports of wildlife in British Columbia.

Reports of dangerous wildlife in an urban setting or reports of wildlife in conflict should always be reported to the COS 24 hour hotline at 1-877-952-7277. This is also the number for Report All Poachers and Polluters (RAPP).

Bears are extremely sensitive to human disturbance and activity. Avoiding an encounter is the best way to protect both yourself and bears.

When on a trail

If you encounter a bear

If a bear approaches you or charges:

Usually, bears charge or attack because they are feeling threatened. Use your bear spray. If you don’t have bear spray and the bear makes contact with you – roll on your stomach, cover the back of your neck, remain still and play dead, they will lose interest and leave.

In rare cases, a bear may see a human as prey and stalk you along a trail. In these cases, try to escape into a building, car or up a tree. If you cannot escape and the bear charges, use your bear spray, lacking that, use anything at your disposal to fight off the bear (rocks, sticks, hiking poles).

The differences between black bears and grizzly bears can be found here: