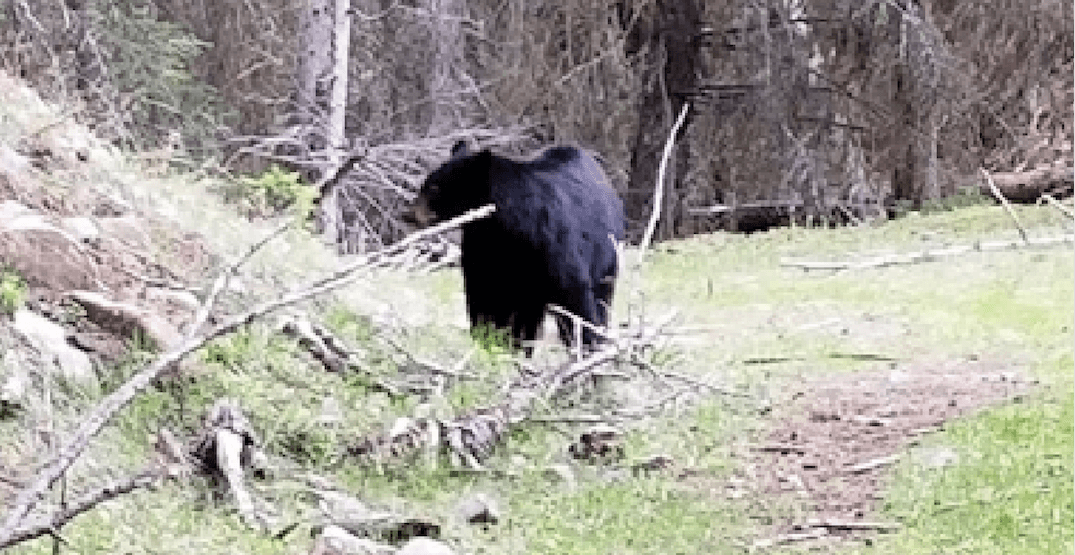 The bear that stallked Ashley Gribble and her dogs before the attmepted attack. (Ashely Gribble / Facbook

Although Ashley Gribble said she always makes noise and continuously observes and watches the environment around her when hiking, a recent experience on a trail near Kamloops caught her completely off-guard.

Now, she’s crediting her four-legged friends with helping to save her life.

The ordeal all began during a Sunday hike earlier this month, when Gribble was with her dogs, on a trail between McQueen Lake and Isobel Lake.

She had been hiking for about an hour and a half, and was coming back along a pond through some trees.

“All of a sudden a bear appeared a mere five feet from me,” she wrote on Facebook. “Not I, or any of the dogs had heard, seen or smelled this bear. I was shocked at just how close it was.”

Mika, Gribble’s Jack Russell mix, was closest to the bear. “She barked and backed the bear up a few feet to give us some space,” wrote Gribble. “I backed slowly out of the trees onto the main trail and continued backing up slowly while talking to the bear.”

She recalled that neither of her dogs approached the bear at any point: “They all stayed behind me.”

Although both the dogs were barking, “the bear continued to follow us at a trot pace.”

Gribble said she was “loud and visible,” but the bear kept coming.

“It was quiet – never made a sound,” she said. “Silent and purposeful as he strode towards us.”

The bear proceeded to follow them for about 15 minutes, before “suddenly” turning and going up into some trees.

At this point, Gribble figured the bear was a mother, who was just wanting a little bit of space.

While she found the situation “a little intense and creepy,” she figured that was essentially the end of the ordeal.

But Gribble was wrong.

“We continued to leave the area back the way we came, heading back to our vehicle near McQueen lake,” she said. “We hiked for another full kilometre – about 25 minutes.”

“A disturbance in the trees”

All of a sudden, Gribble heard a “disturbance” in the trees to her left. She turned and couldn’t believe what she saw: the bear was coming out of the trees; it had followed them.

“I was able to discharge my bear spray but it did not stop the bear,” she recalled. “At this point I’m yelling and backing up while the dogs are barking.”

As she was backing up, Gribble tripped backwards, falling over a rock.

“I was on the ground, [and] the bear just a few feet from me, lunged and I prepared myself for a bite,” she said. “It was at this moment that my dog Bane leapt in front of me and the bear attacked him instead.”

The bear picked the 80-pound Bane up “like a stick and proceeded to run with him for a short distance.”

Gribble said Bane was able to get free and run, but then the bear “chased him like he would chase a deer, grabbed his behind, bit into his back, covered him with his body and pinned Bane.”

By this point, Gribble was yelling and screaming.

“Before I even knew what was happening… my instincts were taking over and I was running full tilt at the bear with a log,” she said. “I proceeded to beat that bear in the face and head with the log repeatedly, specifically aiming for his eyes and nose.”

Finally, “after about a dozen blows,” the bear released Bane, who was able to flee back to the other dogs to safety.

Now Gribble was alone, and face-to-face with the bear.

“I screamed as loud as I possibly could and banged the log against the trees beside me,” she said. “The bear stared at me for what seemed like forever and then for whatever reason the bear decided to give up and slowly retreated up the slope behind him as I backed my way out of the trees towards the waiting dogs.”

As a result of the attack, Bane received 26 punctures from bites and claws, and has three drains as well as internal bruising.

“He is home recovering and feels a bit better everyday,” said Gribble. “If Bane had not leapt in front of me, I know without a doubt that the bear would’ve mauled me and most likely would’ve killed me. He absolutely saved my life.”

She says the bear was later located and humanely euthanized for public safety, given that Isobel Lake is a very popular location for school field trips and the general public.

“This bear stalked us for a full kilometre in the trees. We never knew he was there. Five big dogs were not enough to deter the bear,” she said.

Going forward, Gribble said she will “never forget the events of this day,” and that she “will be better for it.”

She stressed she shared her story not to scare anyone, but rather to “encourage education and awareness” in nature.

“And of course I’m sharing because my dog Bane is a hero and he deserves to be recognized for saving my life,” she said. “Sunday could’ve gone much differently and I’m forever grateful. This won’t stop me from enjoying nature but I will never be the same.”