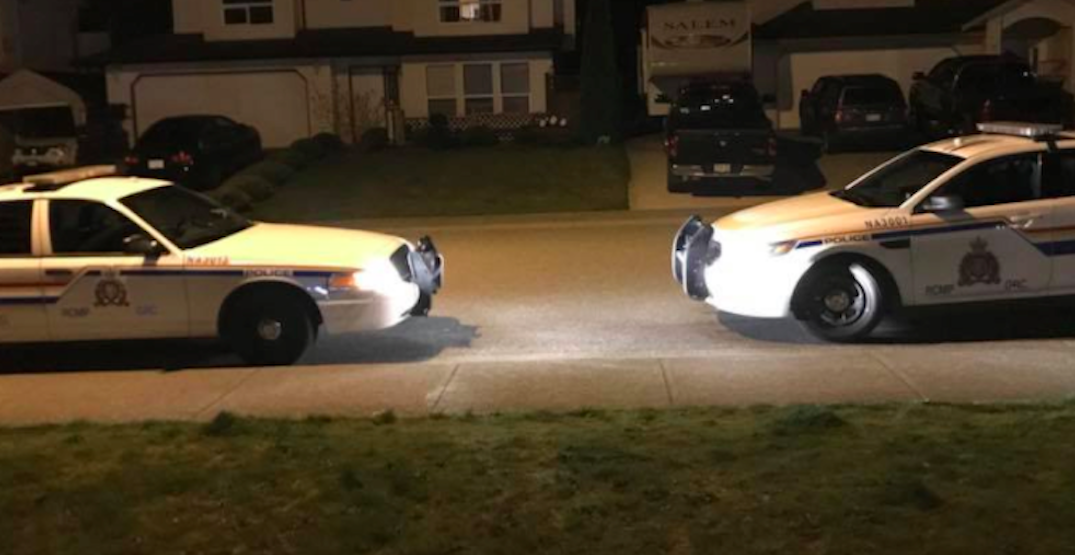 It was unintended – but classic – Canadiana, with all the required elements for a Vancouver Island woman during an incident this week.

The situation began around 10:30 pm on Wednesday night, when Nanaimo woman Jessica Boyd heard “horrible scratching sounds” at the side of her house.

“I legit thought someone was breaking in,” she said on Facebook.

Wasting no time, Boyd called Nanaimo RCMP who said they responded “in force” to the call.

“When officers arrived they immediately set up containment and approached the scene with trepidation, not knowing what they may be walking into,” said Nanaimo RCMP Const. Gary O’Brien.

Using skills “acquired and honed over the years,” Boyd said the officers were physically and mentally prepared to accept the challenge head-on.

“With flashlights in hand the source was identified,” said Boyd, who noted the officer at the scene then told the suspect to come out with their hands up and not to make any “sudden movements.”

It was then, the suspect “slowly and deliberately” came into view of the officer, “paws and tail in the air.”

Yes, the offending culprit turned out to be a fully-grown beaver.

“The officers tried asking the beaver for some identification but with a shake of its tail, it simply meandered through the yard and was last seen heading southbound, in search of more beaver-friendly hangouts,” said Boyd.

The beaver leaves the scene of the “crime” on Wednesday night in Nanaimo, BC. (Jessica Boyd / Facebook)

“The officers reassured the panicked caller that the situation had been resolved,” he said. “When she was told it was a beaver, they all shared a good laugh and chalked it up to just another day in Nanaimo.”