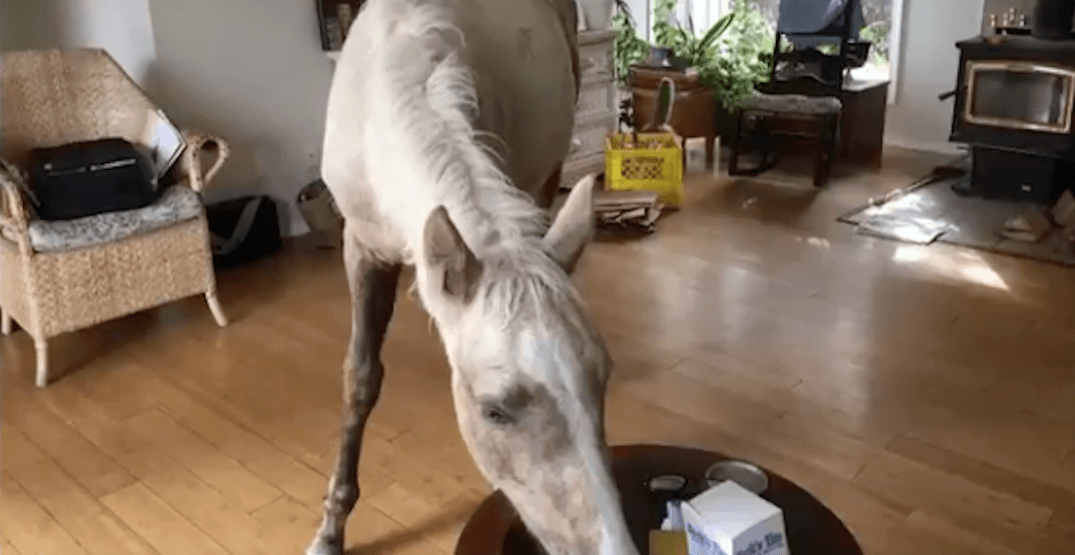 Emergency responders near the Vancouver Island community of Port Alberni received a highly unusual call about an intruder this week. But as it turned out, the caller wasn’t horsing around.

“I’ve had horses for 55 years, and I’ve never seen a horse do that,” said Terry Galloway.

According to a report from CHEK News, the horse in question is a three-and-a-half-month-old quarter horse named Happy.

Galloway was at her home on Monday and had left a door open while she was working inside.

Happy, who was reportedly grazing close to Galloway’s house, saw an opportunity.

“I saw her coming and I tried to stop her, and I just didn’t even have time – she was up those stairs in less than two seconds… and then she just sat in the living room.”

Now Galloway faced a whole new problem: how to get the horse back outside.

“We were scared for her to go back down the stairs because she could break a leg,” she recalled.

She decided to call 911 for assistance, telling them about her rather unique situation and crews from the Sproat Lake Fire Department attended the scene.

They managed to put two slings around the horse, guiding her out and helping her down the stairs, “so that she didn’t go too fast,” said Galloway.

The entire rescue reportedly took about half an hour, with Happy “staying calm the whole time.”