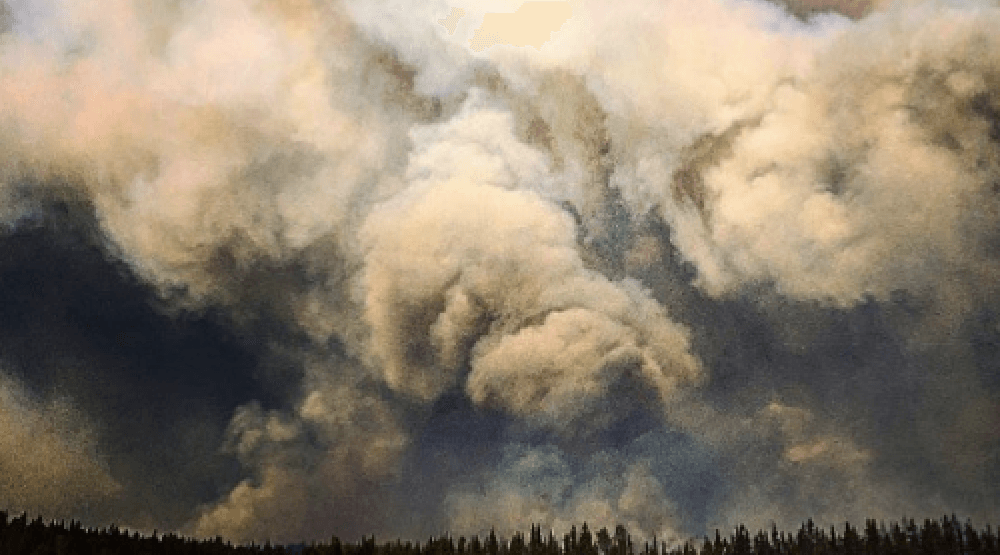 A wildfire burns out of control near Williams Lake. (Image: @eric.depenau / Instagram)

More than 10,000 British Columbians have now been forced from their homes as wildfires continue to wreak havoc, threatening homes and livelihoods throughout the province.

On Sunday night, at least 128 new fires began across BC. In addition, some existing fires grew in size, as a result of weather changes such as wind shifts, like the one such that resulted in an evacuation order for 100 Mile House – a community of almost 2,000.

On Monday, a total of 300 firefighters and staff were scheduled to arrive in BC from Alberta, Saskatchewan and Ontario to assist with the firefighting efforts.

These numbers are in addition to the 1,000 firefighters and 600 support personnel already battling the blaze, according to BC Minister of Forests John Rustad.

“The fire situation continues to be very difficult, with fires that are very challenging to actually attack because of the intensity,” said Rustad over the weekend.

As of Monday, there were approximately 220 wildfires currently burning in British Columbia.

On Sunday, both the province’s outgoing Premier Christy Clark and Premier-designate John Horgan travelled to Kamloops to meet with those who were forced from their homes and are now taking shelter at evacuation centres.

While there, Clark announced $100 million in provincial aid for those impacted by the fires.

“As the full force of the fire becomes clear, British Columbians need to know that government support will be sustained,” she said. The funds are meant to provide “impacted communities and residents the resources needed to rebuild.”

Clark added that the transition team for the  the incoming government “has been briefed” on the establishment of the fund.

“I know British Columbians across the province stand ready to lend a helping hand,” said Horgan. “Whatever these wildfires throw at us, we will overcome it.”

The Canadian government has also announced its plan to provide aid to the province.

“On behalf of the Federal Government… I have accepted a request for federal assistance in dealing with the wildfire situation,” said Ralph Goodale,  Federal Minister of Public Safety and Emergency Preparedness.

“The Government Operations Centre is working diligently to coordinate the federal response to ensure that help is provided as soon as possible, and will continue to monitor and assess the wildfire situation as it evolves.”

The Canadian Armed Forces has deployed a CC-177 Globemaster III, a CC-130J Hercules, two CH-147F Chinook, and three Ch-146 Griffon to BC to help in the wildfire fight.

Numerous air quality advisories as a result of smoke from the fired have been issued across the province as well. These advisories include:

Numerous roads and highways across the province have also been closed or are operating at reduced capacity. These include:

For the latest and most up-to-date road closures, visit DriveBC.

Outside the studios of country 840 in 100 mile house. pic.twitter.com/AsL7WZLHgz