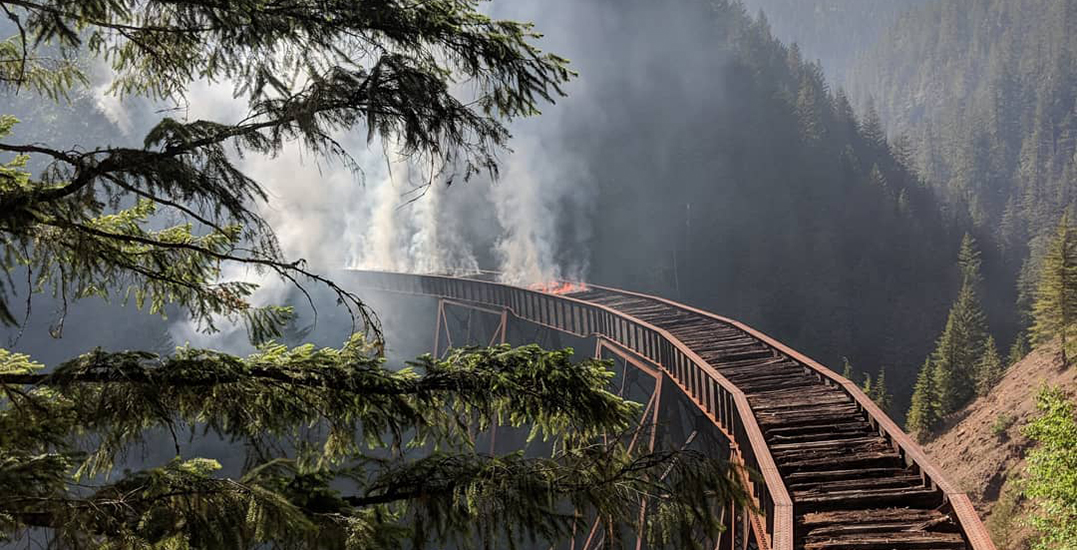 BC Wildfire Services are currently battling a wildfire that’s captured parts of the Ladner Creek Trestle Bridge in flames.

The fire was discovered on Sunday, May 27, when a witness noticed a “careless person” throwing a cigarette butt underneath the bridge.

The witness reported two men and one woman making their way across the bridge and dropping a cigarette butt near the far end, according to a CBC report.

When the group of people returned from the bridge, smoke was already starting to rise.

Mallory Mogg, who witnessed the event firsthand, asked the group if they had been smoking on the bridge. When they turned around to look at the rising smoke, they commented: “shoot, that’s not good.”

Within 20 minutes, the fire had escalated to the size of a bonfire, with planks of wood falling off the bridge and into the forest below.

Fire crews arrived on the scene shortly after.

BC Wildfire Services confirmed that the fire is currently 0.2 hectares in size, however, the steep terrain is creating difficulty for fire crews.

The Ladner Creek Trestle Bridge, part of the Kettle Valley Railway, opened in 1915.

Although the railway hasn’t seen any train-based use since 1989, much of the original route has become a historic recreational trail, one that’s been immensely popular with BC residents.