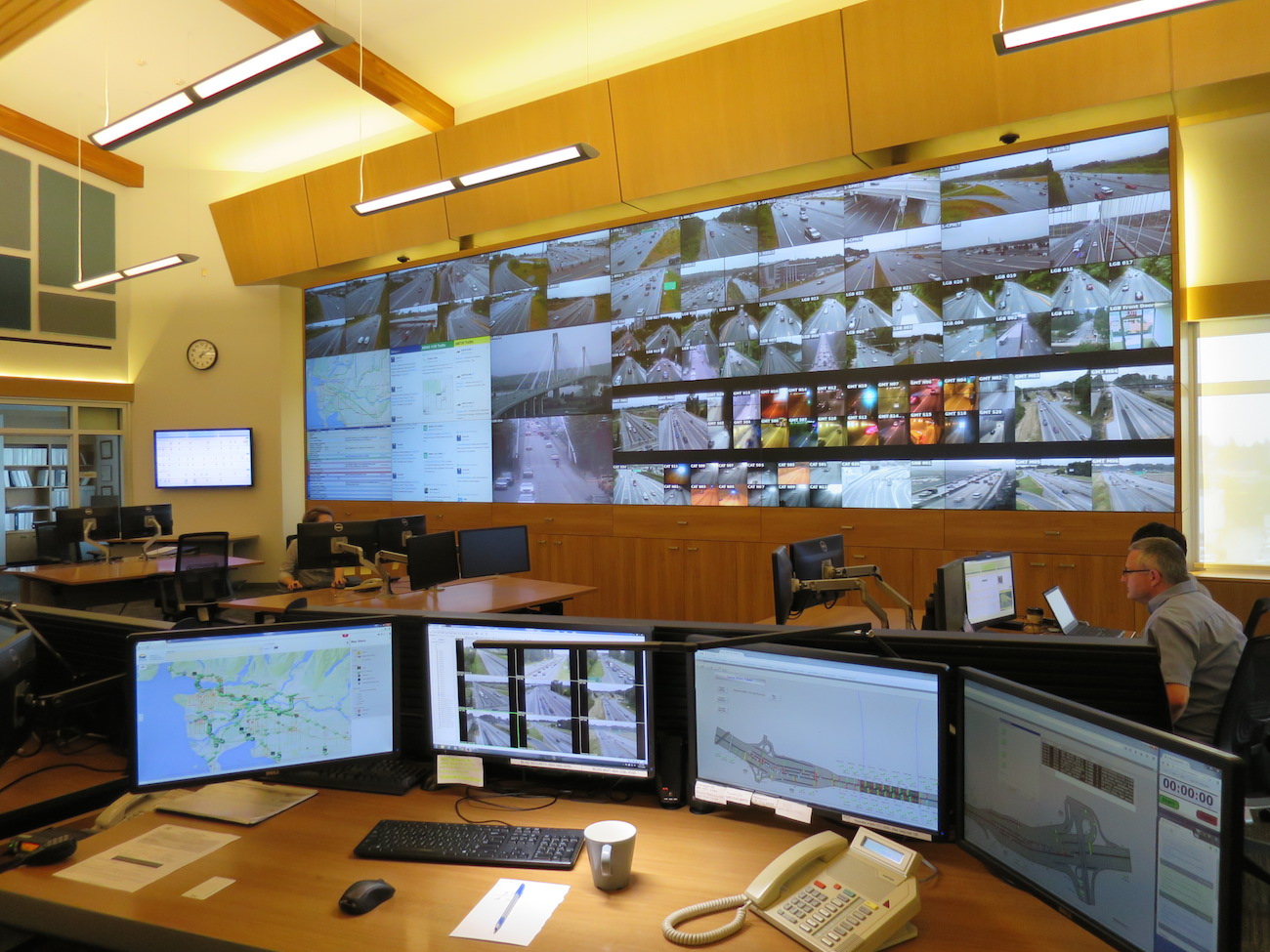 It is 7:30 am in the middle of the morning rush hour on Tuesday and a vehicle collision on the northbound lanes on the Alex Fraser Bridge causes traffic to backup all the way to Nordel Way.

Minutes later across the Metro Vancouver region there is another collision between a truck and a tour bus in the Stanley Park Causeway, resulting in a full closure of the bridge and backups deep into North Vancouver and West Vancouver.

At the new state-of-the-art control centre at the Regional Transportation Management Centre (RTRMC) in South Coquitlam, operators are responding to what they are seeing on CCTV cameras and a sensors, and working swiftly to clear both incidents as soon as possible and funnel traffic away from the blocked routes. First responders and tow trucks are deployed to the sites to clear the accidents as soon as possible, and on the George Massey Tunnel the counterflow changes to allow for more northbound capacity to handle the redirected traffic from the Alex Fraser. 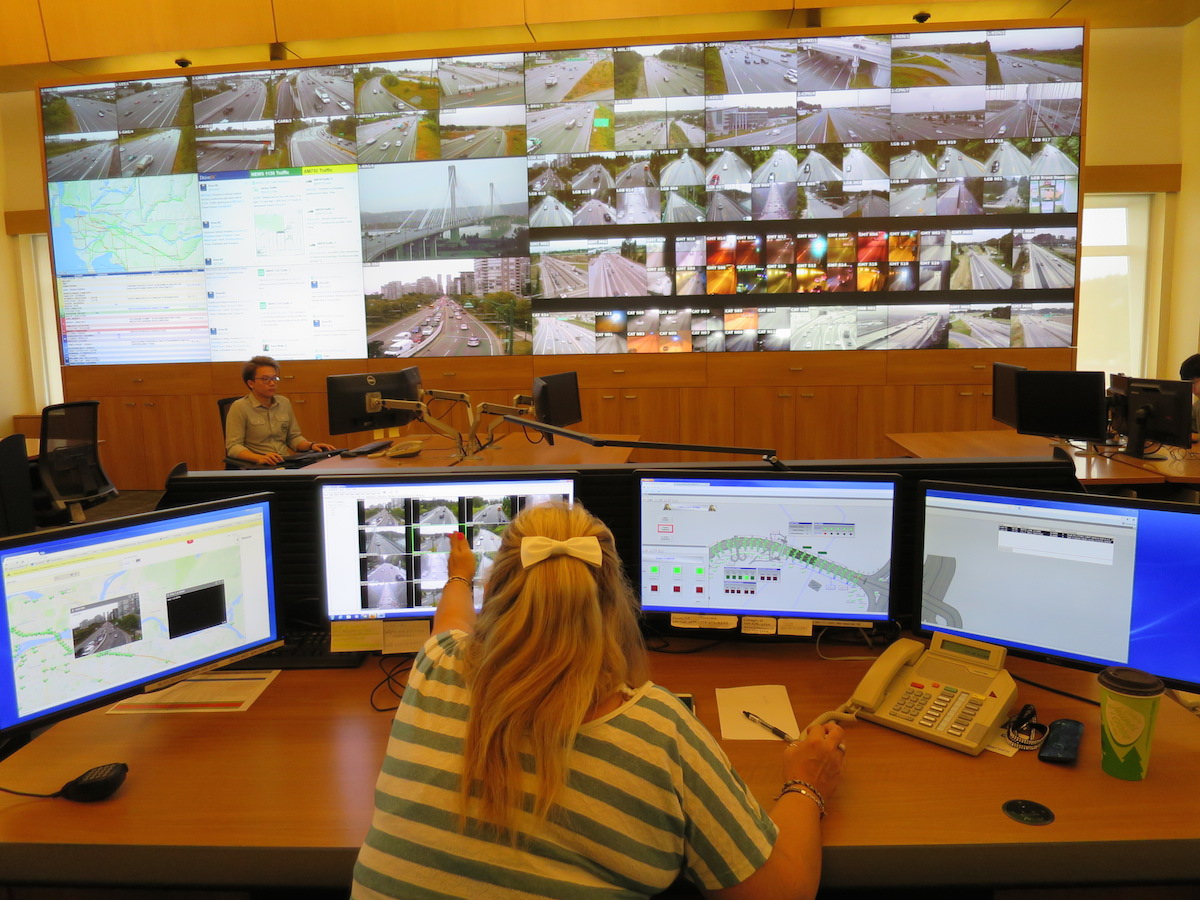 Every single day, 100,000 cars traveling along Highway 1 near the north end of the Port Mann Bridge pass by the Regional Transportation Management Centre (RTMC) – a multi-agency hub for monitoring traffic congestion and incident management in real-time and a communications centre for providing a coordinated response during emergency events.

The autonomous, post-disaster facility can withstand a high magnitude seismic event and still remain fully functional for a week without external water or power supplies.

The five-storey building is built on a floating stab with stone columns that allow the facility to move with the shaking ground during an earthquake, and given its close proximity to the Fraser River the facility is also built to 100-year flood level.

Exterior of the Transportation Management Centre. 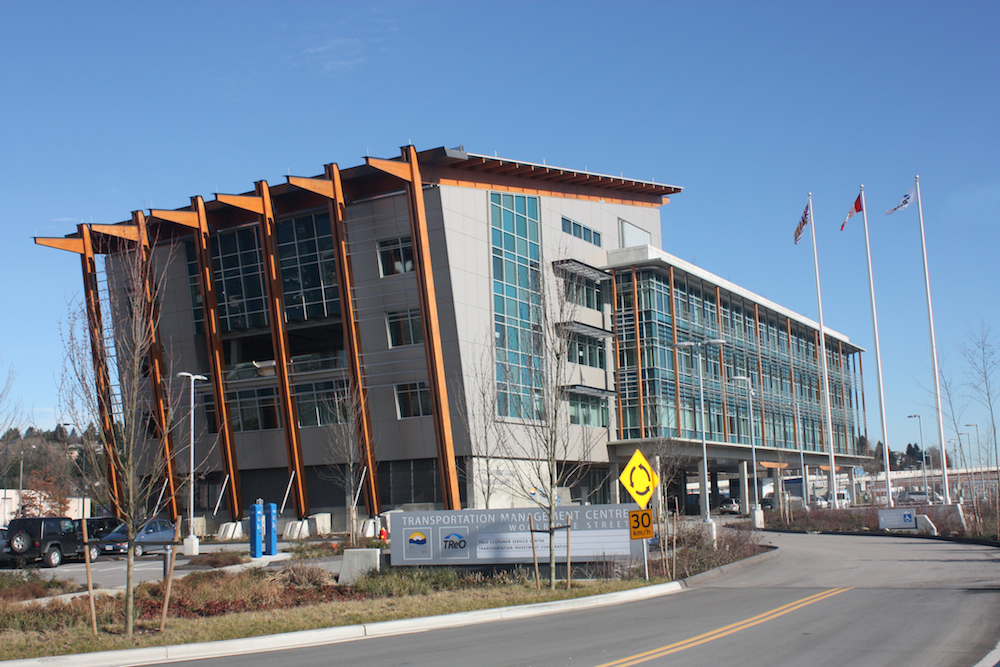 Other post-disaster features that keep the facility operational include two powerful generators with 55,000 litres of fuel storage to keep the building powered for up to a week, 247,000 litre general use water tank, 3,000 litre potable water tank, on-site sewage station and storage, redundant fibre and wireless communications, and independent fire and gas suppression systems.

“We are a 24/7 operation,” Joyce Chang, the Director of the RTMC, told Daily Hive during a tour of the facility. “Should a disaster happen, we can seal off this building and the operators and management staff and can work and sleep here. We can set up cots in the lunch room and have seven days of supplies of food.”

And when there is an emergency, there is plenty of extra space in the control centre, located on the top floor of the building, for other agencies to set-up and operate.

For day-to-day monitoring and incident response, the live feed from over 600 cameras operated by the Ministry of Transportation along major roads, highways, and bridges across the province are monitored from work stations and a large video matrix wall in the control room located on the top floor of the RTMC.

As can be expected, most of the cameras are located on routes in the Lower Mainland where there are approximately 1.8 million registered vehicles driven by nearly two million active drivers, according to ICBC. Cameras are densely spaced along the Lions Gate Bridge-Stanley Park Causeway route and along Highway 1 from Second Narrows Memorial Bridge to Surrey.

Along this section of Highway 1, cameras and speed-measuring microwave radar sensors are spaced just 500 metres apart to monitor the conditions of every section of this high-traffic route.

A small fraction of the CCTV network can be viewed publicly on the road conditions website, Drive BC, which is the provincial government’s most popular website. 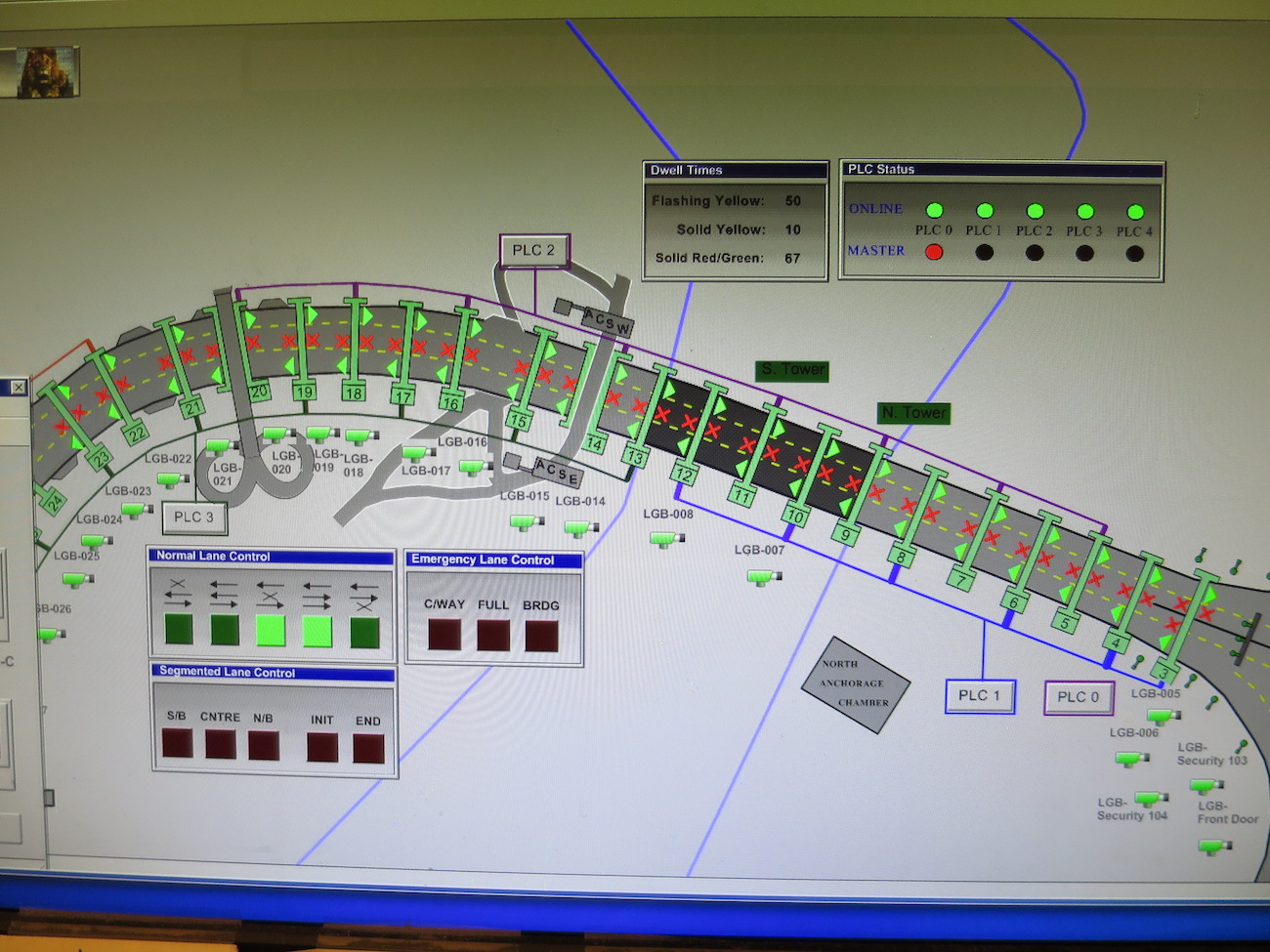 Operators use the same camera system to determine when to change the counterflow directions on the Lions Gate Bridge and George Massey Tunnel. For the Lions Gate Bridge, it generally takes about three minutes to switch the lanes, ensuring the gates are closed and all vehicles are in the correct lanes, but longer during the summer when there is more traffic.

“With RTMC, we’re able to centralize operations and work more closely with the Ministry,” Chang said. “With the addition of cameras, our operators have very good situation awareness. For instance on the Lions Gate Bridge, since we moved in here, we’re able to proactively start allowing northbound or southbound afternoon counterflow changes to relieve some of the pressure from the North Shore municipalities while allowing most of the northbound pressure traffic through.”

The RTMC also closely monitors Pattullo Bridge, which is owned and maintained by TransLink. As some of the lanes close at times, operators at the control centre look for delays, queue buildups when incidents happen, and the time it takes to clear any incidents. Vehicle stalls on this crossing are generally cleared quickly – in between four and eight minutes. 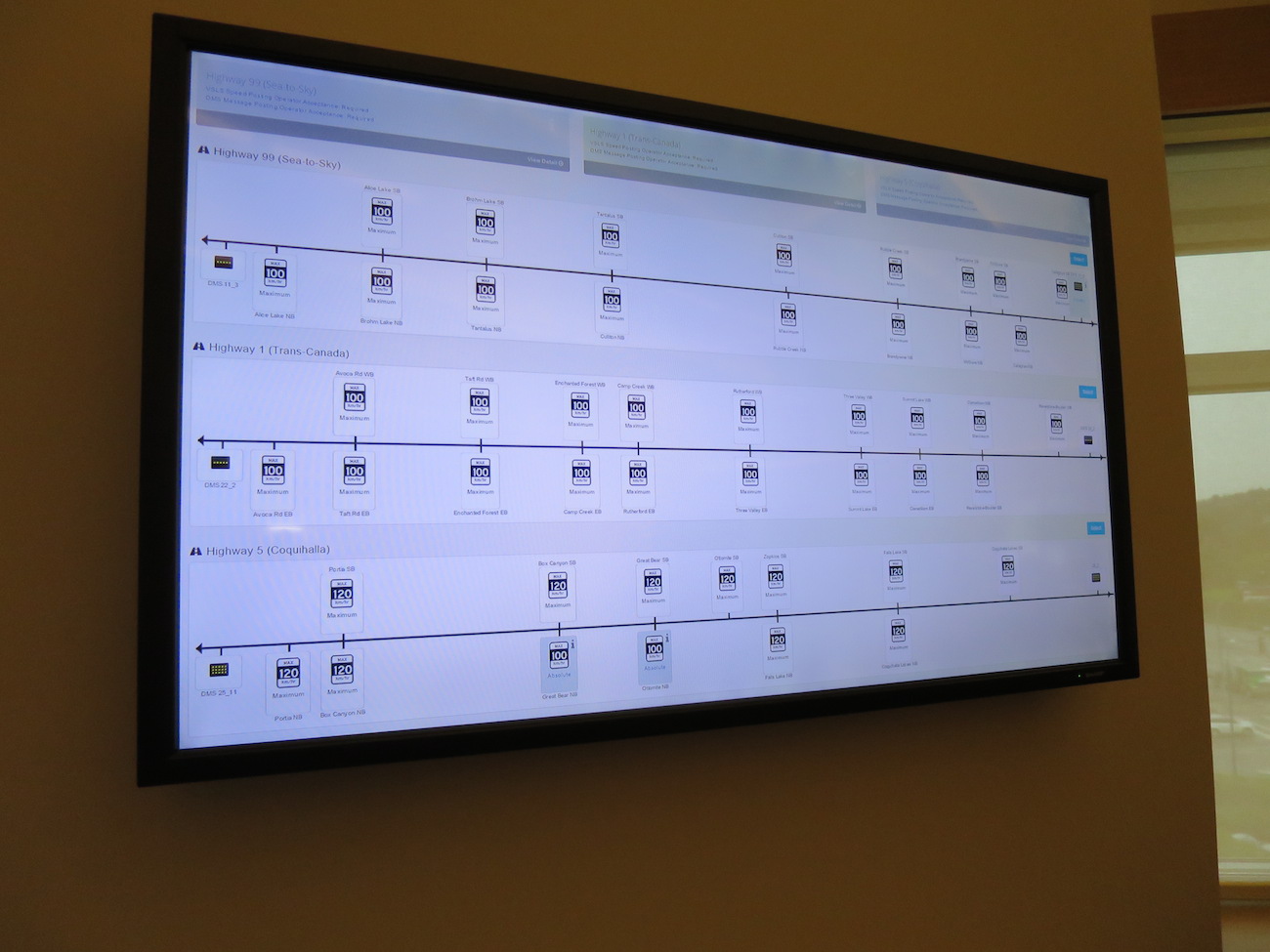 Recently, the controls for the variable digital speed sign project were added to the control centre. There are three highway corridors in B.C. that have been outfited with the changing speed signs: the Trans-Canada Higwhay, Coquihalla Highway, and Sea to Sky Highway from Squamish to Function Junction in Whistler.

The speed limits posted on the signs are reduced when poor weather conditions are detected by sensors or roadside construction in the area is planned. On the screens in the control centre, when the variable speed dashboard lights up with red due to changing weather conditions, an operator needs to take action. Cameras installed in the area of the sign also serve to confirm poor weather and traffic conditions.

To ensure the signs are working properly, the control centre receives a bitmap feedback from the sign to confirm what the pixelation on the sign reads.

While the RTMC provides a clear picture of what happens on B.C.’s major roads, operators say they rarely see accidents happen on camera. And given the amount of data recorded at any particular moment of time, they are not able to store the footage. However, data and video feeds are shared with agencies such TransLink and E-Comm and major municipalities such as Vancouver, Richmond, and Surrey, which has its own municipal traffic control centre – a miniature version of the RTMC. E-Comm, the 9-1-1 emergency dispatch centre for Metro Vancouver and parts of B.C., is housed inside another post-disaster, seismic-resilient building near the PNE in East Vancouver.

The RTMC building also houses the offices for the Ministry of Transportation, Transportation Investment Corporation, and TReO Customer Service Centre for road tolling.