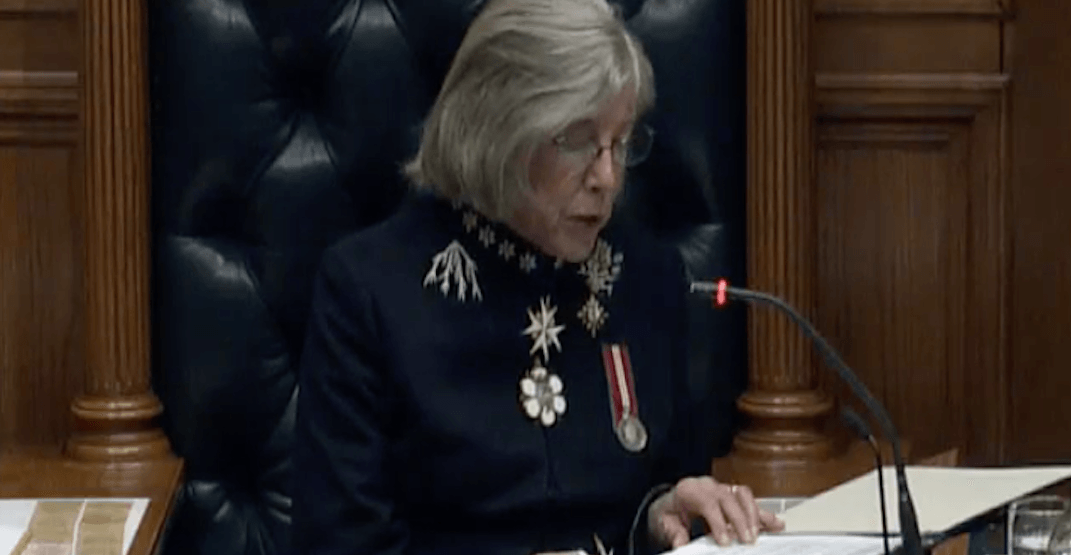 BC Lieutenant Governor Judith Guichon reads the throne speech on Tuesday. (Government of BC)

After an opening prayer by Reverend Keith Howard of the United Church of Canada, the BC NDP’s throne speech was read out in the legislature by Lieutenant Governor Judy Guichon on Tuesday afternoon.

And, in a familiar party refrain, the speech was heavily focused on housing and affordability in the province.

And housing, she added, “is the single greatest challenge to affordability” in the province.

“We are called to action on housing by the people of BC who need our help,” she said. “We know that government cannot solve the problem on its own, but we also know that it must be part of the solution.”

Fixing the problem will take “new ideas, commitment and working together.”

The provincial government will “embrace this challenge with energy and determination and make a difference in the lives of the people who call BC home.”

The government’s first step she said is to “address demand and stabilize BC’s out-of-control real estate and rental market.”

The throne speech announced the start of the largest investment in affordable housing in this province’s history, including social housing, student housing, seniors housing, Indigenous housing and affordable rentals for middle-income families.

The government also said access to affordable, safe and secure housing is the “top concern” for people in BC.

This, said Guichon, also includes the introduction of  “significant” new measures to address the effect of speculation on real estate prices and to crack down on tax fraud and money laundering in BC’s real estate market.