New BC Premier John Horgan is the second most popular premier in Canada, although British Columbians oppose two of his major policies, according to new polls by Angus Reid.

The first online poll, conducted between September 5 and 19, asked 5,466 Canadians for their opinions on premiers across the country.

Some 48% of BC residents surveyed approved of Horgan’s job performance as leader of a minority BC NDP government only two months into his first term.

Overall, in terms of popularity, Horgan was second only to Saskatchewan Premier Brad Wall, supported by 49% of Saskies initially polled, even as he is about to retire.

And the premier with the lowest approval rating in the country was Ontario’s Kathleen Wynne, who garnered only 17% support from the Ontarians surveyed. 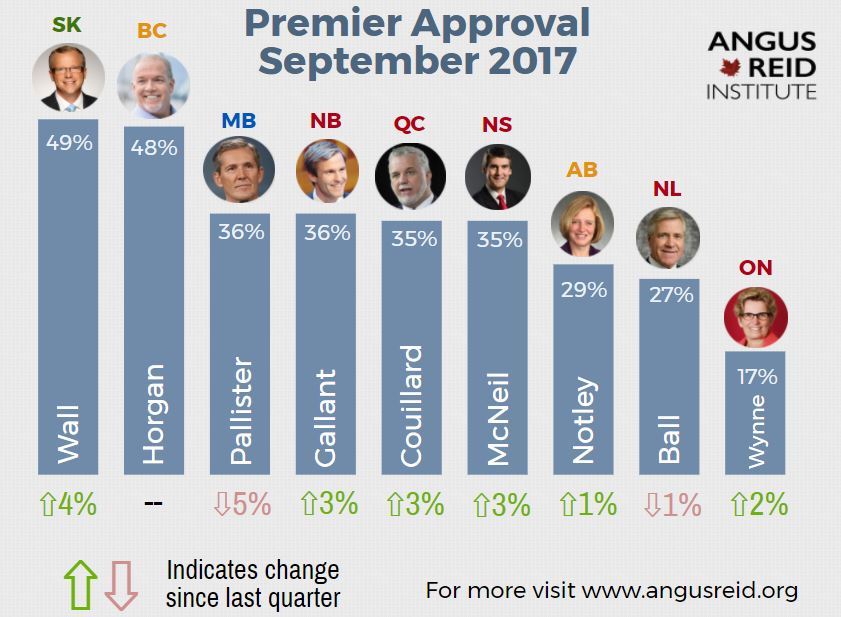 By comparison to previous BC premier Christy Clark, Horgan’s current approval rating is 6% higher than any Angus Reid rating for Clark over her entire term.

Worth noting, 37% of BC residents questioned said they disapprove of the new BC premier, including 47% of those residents aged over 55 years old.

“Countless waves of analysis reveal a trend of newly sworn … leaders enjoying higher approval at the beginning of their mandates, only to see it slip away,” say researchers.

“Time will only tell how long Horgan’s honeymoon period with British Columbians will last.”

An artistic rendering of the Site C dam on the Peace River in BC. (BC Hydro)

Interestingly, in another online poll during the same period of 608 British Columbians, Angus Reid found they are more likely to support two projects the BC NDP opposes.

Those projects are the controversial Kinder Morgan Trans Mountain pipeline expansion through Burnaby and the Site C hydroelectric dam project.

Both projects have been strongly opposed by Horgan, his new BC NDP government, and the BC Greens, with whom he has a confidence and supply agreement to govern.

The $8.8-billion Site C project is already about 25% complete, with $1.8 billion already spent and $4 billion committed in contracts.

However, the Horgan recently sent Site C to be reviewed by the BC Utilities Commission. In its first report, the BCUC found cancelling the dam would cost $1.1 billion.

As for the Kinder Morgan pipeline expansion, it has proven extremely controversial over the years, since it would tear through Burnaby Mountain.

The BC NDP government have pledged to fight the pipeline expansion in court and have hired a QC as external legal council to help them do so.

However, it has already been approved by Justin Trudeau, who says his support for the expansion will not change despite the BC NDP’s stance.

Meanwhile, Angus Reid found 47% of those polled in BC thought the Kinder Morgan expansion should go ahead, with 33% opposed, and 20% unsure.

However, there is more support for the new BC NDP government’s pledge to bring forward a vote on proportional representation.

Some 65% said they would prefer a BC electoral system that assigns seats proportionally, rather than the current first-past-the-post system, supported by only 35%.

In fact, proportional representation was the majority choice across all respondents of all ages, with support from younger respondents hitting 78%.