Bennett was B.C. 27th Premier and served from 1975 to 1986. A significant part of his legacy was his role in bringing Expo ’86 to Vancouver, though he exited office during its run. His government was also behind the construction of the Coquihalla Highway.

Born William Richards Bennett on April 14, 1932 in Kelowna, Bennett stepped into the political stage when in 1973 he went after, and won, the Social Credit (Socred) Party nomination for the Okanagan South seat his father had vacated. Soon after, Bennett took the post of Socred Party leader and served as leader of the opposition.

Bennett became Premier of B.C. in 1975, though his years in office were not free from troubles. 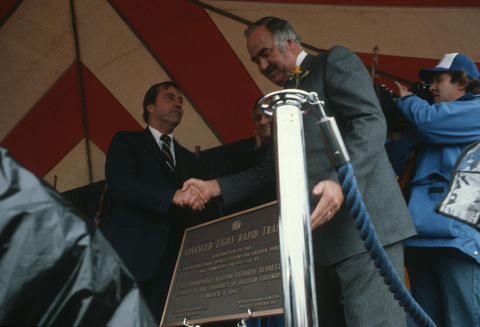 In 2005 the bridge across Lake Okanagan in Kelowna was named the William R. Bennett bridge in his honour, and in 2007 he received the Order of British Columbia.

Premier Christy Clark issued the following statement today on the death of Bennett:

“As the son of one of British Columbia’s most iconic leaders, Bill Bennett not only emerged from his father’s shadow – he built his own legacy. He will be remembered as one of our greatest and most influential leaders.

“It started with a natural, commanding presence like few others – the kind of person people couldn’t help but notice when he entered the room. Throughout his career, he made an impression on people as a humble man, who believed in public service as a calling. What made him stand out was his focus, commitment to fiscal discipline, and vision for B.C.’s future.

“Perhaps no other Premier did more to modernize our province. He brought the SkyTrain, Canada Place and BC Place to Vancouver, began the Coquihalla Highway project, and expanded our mining and hydro industries. It was only fitting that one of his final acts as Premier was to open Expo 86 – inviting the world to our shores, and welcoming them to the best place on Earth.

“As great as his accomplishments were, he took even more pride in his greatest legacy – his family. My thoughts and prayers are with them at this time.

“For any and all British Columbians who wish to pay tribute to one of our most influential sons, details will be forthcoming in the near future.”