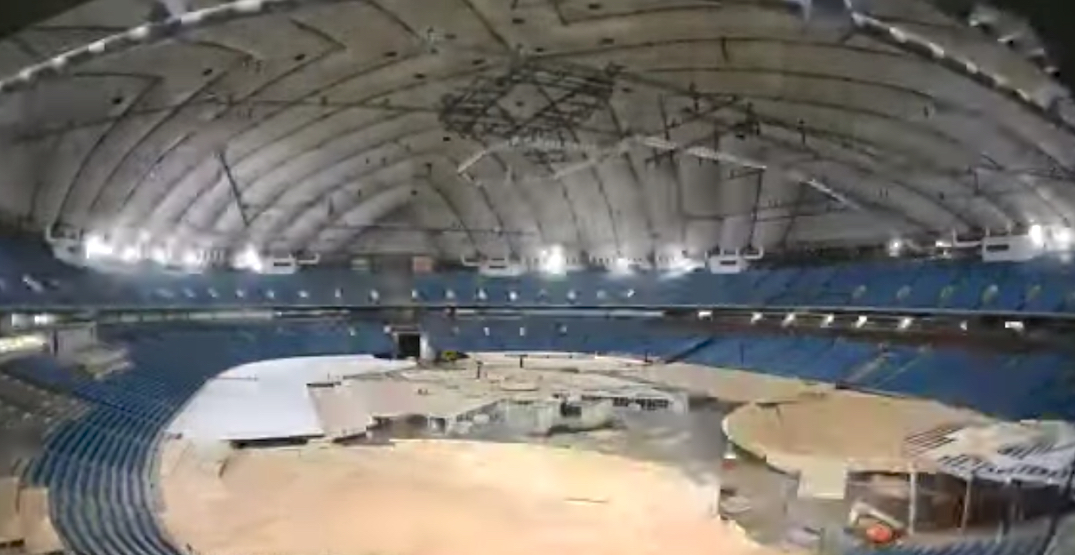 BC Place Stadium went live to the world at precisely 6 pm on Friday, February 12, 2010, for the start of the Opening Ceremony of the Vancouver 2010 Olympic Winter Games.

Under the old air-inflated dome, it marked the first time an Olympic Opening Ceremony was held indoors — providing a climate-controlled venue for what would turn out to be a rainy winter night — and was the largest ceremonies venue ever used for the Winter Games.

The Organizing Committee for the Vancouver 2010 Games (VANOC) chose David Atkins Enterprises (DAE) to stage both major ceremonies, following a selection process that also considered Cirque du Soleil and Don Misher, who produced the Olympic ceremonies for Atlanta 1996 and Salt Lake City 2002. The Australian team was known for its proven record with executing the Sydney 2000 Summer Games and the Doha 2006 Asian Games ceremonies.

DAE went on to deliver an Opening Ceremony running with a theme of “Landscape of a Dream,” which celebrated Canada’s diverse geography and population, while the Closing Ceremony took on a whimsical approach that mocked Canadian stereotypes.

These were the largest theatrical productions ever produced in Vancouver, with a final budget of $48.5 million and a cast of about 5,000 performers, including over 2,000 volunteers for the Opening Ceremony. Planning for the productions began three years in advance.

In Fall 2009, a large tent erected on the parking lot next to the Plaza of Nations, just south of the stadium, became the practice and operational hub for the vast majority of volunteer performers, with most rehearsing 21 days at a minimum of four hours per day.

These were the first Olympic ceremonies ever to heavily incorporate and depend on the high-tech use of digital projection, with different landscapes and imagery projected onto surfaces, including the fabric suspended from the stadium roof, stages, screens, and spectators dressed in white.

But getting the stadium ready was an immense challenge, given the weight limitations of the air-supported roof, which is kept upright by using six giant fans to keep the air pressure inside the building at a level that is higher than the air outside.

Prior to the post-Games, 2011-completed renovation that replaced the air-supported roof with a retractable roof, all entrances and exit points at the stadium — both for spectators and loading areas — were air locks to retain the internal air pressure.

With these unique stadium challenges, as a conventional fixed roof would have certainly provided more flexibility, DAE had to overcome obstacles with how much staging, equipment, and props could be supported from the air-supported roof.

The tight backstage footprint of the stadium, coupled with the air locks, also meant large physical props had to be relatively limited, unlike in past ceremonies. 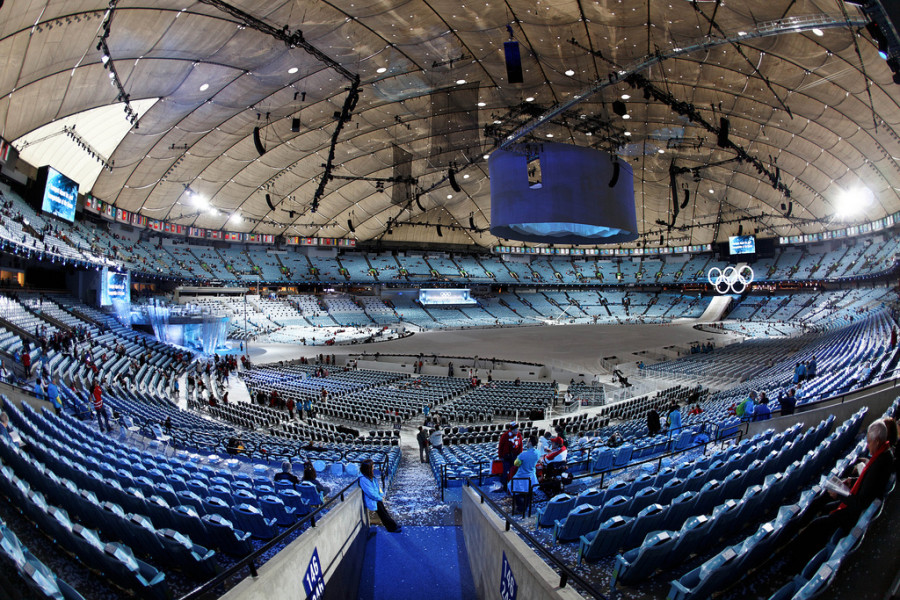 But they were still able to suspend a significant weight from the air-supported roof — a total of about 110 tons, roughly equivalent to the weight of 100 cars, from 360 roof rigging points. This included 1,054 intelligent lighting fixtures, 572 standard fixtures, 1,296 LED screen tubes, 1.8 kms of trussing and 60 automated winches for aerialist performers and scenic elements, and 28 tons of speakers.

The largest prop in the Opening Ceremony was the one-tonne Kermode spirit bear that unravelled from the floor of the stadium.

For both major ceremonies, fireworks were blasted from the concrete rim of the teflon-coated fibreglass inflatable roof.

Attention turned to the condition of the 1983-built stadium after the January 5, 2007 roof deflation incident, when accumulated snow contributed to a tear in the roof and the total collapse.

The roof was re-inflated two weeks later after temporary repairs were made, but behind the scenes the incident prompted the provincial government to draw up plans to extensively renovate the stadium in time for the Games, including the installation of a new retractable roof. However, due to the tight timeline, a decision was later made to only conduct the first phase of upgrades, totalling $65 million. Pre-Games renovations include upgraded concessions, washrooms, suites, and directional signage.

Down below on the stadium floor, an elevated stage floor was constructed, concealing equipment and props — including the mechanical totem poles that doubled as the Olympic Cauldron — and additional floor seating for thousands of spectators.

In 2008, two early ceremonies construction projects were conducted: for the Olympic Cauldron, a deep pit was excavated through the centre of the concrete floor, and a natural gas line was installed.

Construction of the stadium’s entire ceremonies conversion began in November 2009, which is highlighted in this time lapse video spanning four months — through the Olympic Opening Ceremony, Victory Ceremonies, and Closing Ceremony:

Here is a behind-the-scenes video of the ceremonies production, which shows the testing of the Olympic Cauldron:

Each complete three-plus-hour Olympic Opening Ceremony and Closing Ceremony can be viewed in high quality on the International Olympic Committee’s YouTube channel.