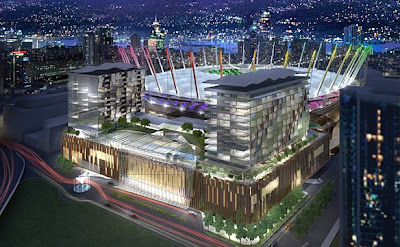 Image: The Vancouver Sun
Update:  The new complex will include a 110,000-square-feet, 24-hour casino, two international hotels and five restaurants. Really hoped the towers were larger, but looks good nonetheless.

The last few days have been filled with speculation with respect to the land surrounding B.C. Place stadium and how the governments plans to help finance the $565 million new roof (see renderings here). The speculation is that a 500 room hotel and mega casino development adjacent to the stadium is being pitched by a Las Vegas area developer. To put that into perspective, it would be equivalent in size to the River Rock Casino and Resort in Richmond.

The other rumour is that BC Place will soon get a name change. Yes, the beloved marshmallow dome isn’t the only thing about change, the name may go with the old roof. All this is to ensure that the taxpayer does not pay for the stadiums new roof. The ultimate aim of PAVCO and the city is to make that a waterfront entertainment destination after the plans to build the new Vancouver Art Gallery at that site fell through.

The new casino is rumoured to be operated by the same group that currently operates the Edgewater Casino, which has been under performing at its current location. As for the new casino I don’t expect to see the Las Vegas Style glitz and glam, after all that area is full of bland and boring condos so… For the new casino to work the street network has to improve its connection with the waterfront because as of right now it’s poor at best.

As for naming the stadium, why not, us locals will forever refer to it as B.C. Place anyways. After all Science World is now the Telus World of Science or something like that and we still refer to it as Science World. My only reservation is that we don’t end up with a stupid name like Gaylord Arena (Nashville Predators) or Jobing.com (Phoenix Coyotes). Maybe Shaw Dome or perhaps Lululemon Field?

With Aquilini set to develop anywhere from 4 to 6 towers (including an office tower) near GM Place and the B.C. place deal, plus the 20 towers by proposed by Concord Pacific for North East False Creek, that area will be totally unrecognizable in 5 to 10 years. I for one can’t wait to see the transformation take place.