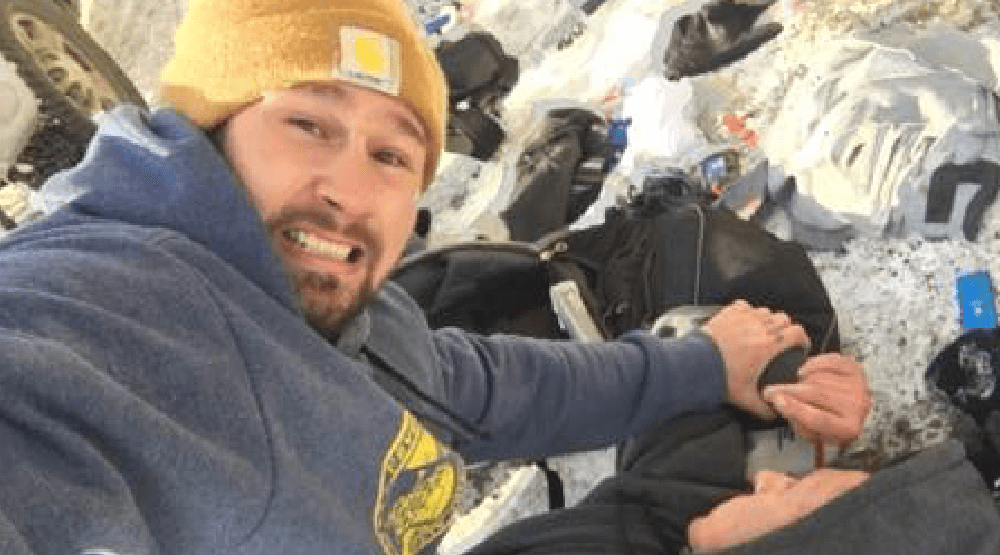 This is not your average selfie.

Kevin Barkhouse of Vernon, BC managed to pin down a robbery suspect and snapped a picture with the thief while holding him down.

On December 19, Barkhouse discovered that his wallet, jacket, and a pair of gloves had been stolen from his truck.

Barkhouse and his brother decided to see if any of the stolen items had been sold to local pawn shops.

In their drive into town, they noticed two men on the side of the road. One of them was wearing the exact jacket that was stolen from Barkhouse’s truck.

They pulled over and Barkhouse decided to approach the man and ask him about the coat he was wearing.

The man told Barkhouse that he got the coat from a Value Village a few weeks ago.

“I told the guy, ‘I just got my truck broken into last night. I had the exact coat that you are wearing got stolen out of (my vehicle) and my wallet and a pair of gloves,’” Barkhouse said.

The man repeatedly told Barkhouse that he had nothing to do with his stolen goods. But Barkhouse was still suspicious and he asked the man and his friend to empty their bags.

At first, the men agreed and started pulling items out of their bags but then they started to get hesitant and that is when Barkhouse took action.

“So I just grabbed his bag and I reached into it, which I shouldn’t have but I did, and ended up pulling my wallet out,” he said.

Barkhouse, who is a former MMA fighter, restrained the man and his brother ran to call the police.

While pinning down the suspect, Barkhouse decided to take a selfie with the thief, making for a pretty epic picture.

Barkhouse said that he took the selfie to “give (his) friends and family a bit of a laugh.”

“I’m that type of guy. Like, I’m that guy that would take a selfie doing that. As long as people get a smile or a laugh that’s what makes me happy.”

The suspect is now in custody and Barkhouse is still waiting for his belongings to be returned from the RCMP.