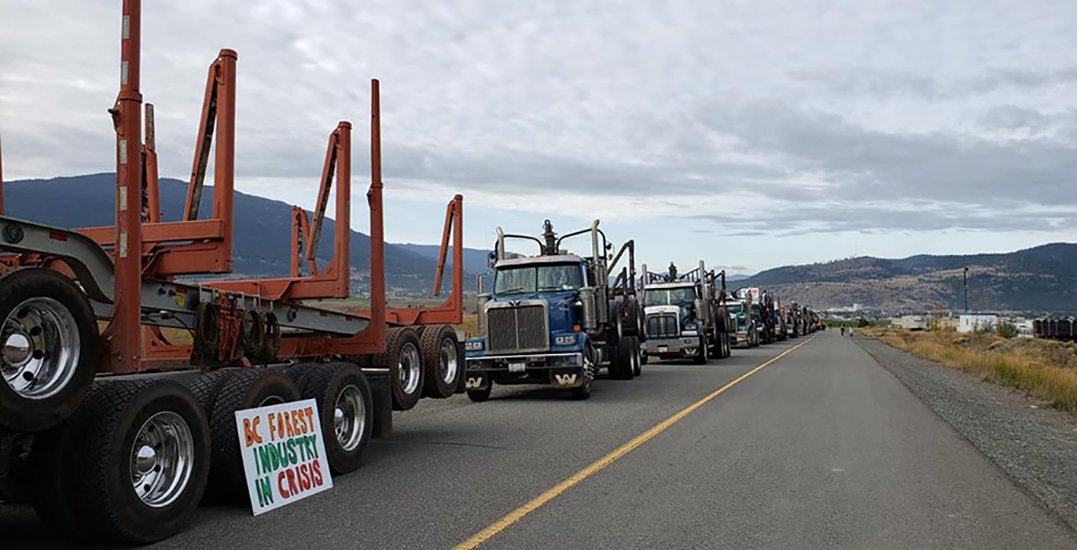 More than 100 logging trucks are taking part in a convoy from Merrit, BC, to Vancouver to protest the future of British Columbia’s forestry industry.

The rally was organized by the BC Logging Convoy, a coalition of loggers, truckers, and businesses that are concerned about the current state of the industry. According to a press release from the organization, many of the participants are third and fourth generation logging families who all “rely on the industry for their livelihood.”

“This is the worst crisis we have ever witnessed,” writes Frank Etchart, one of the co-organizers and owner of Nadina Logging, in a press release. “I am trying to maintain a business that will continue to employ these people and sustain the economy in my town long term.”

“Unless changes are made quickly, I don’t know how we will do that.”

The BC Logging Convoy says that one of the main issues has to do with stumpage rates paid to the provincial government. A stumpage is a fee that a business or individual pays when timber is harvested from Crown land.

“The current stumpage system in BC does not reflect the current market conditions for lumber and chips produced. As a result, the current rates make the cost of logging prohibitive,” says the organization.

The convoy also argues that updates and rate changes for stumpage in BC don’t accurately reflect the current market.

“In contrast, Alberta stumpage trails the current market by one month, allowing for stumpage rates to be very reflective of current market conditions,” says the release. “Alberta mills are operating flat out and sell into the same markets as BC companies.

“There has been a resounding silence in the province as this situation has developed over the last 16 months, which is both unacceptable and unfair to our workers and to the unsuspecting businesses.”

“At this time, we respectfully demand the BC and federal government engage in immediate action to rectify this dire and quickly deteriorating situation that sees the largest employment sector in British Columbia in dire straights.”

Logging trucks involved in the rally will spend Wednesday morning on a single-lane trip to Vancouver with an RCMP escort.

Once they arrive in Vancouver, they’ll be escorted to the Vancouver Convention Centre by the VPD.