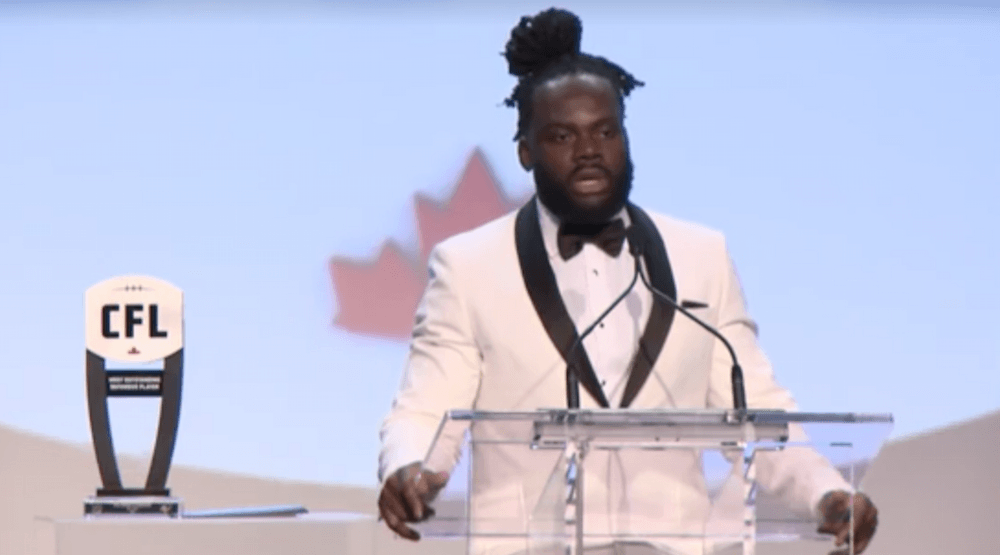 BC Lions linebacker Solomon Elimimian was named the CFL’s Most Outstanding Defensive Player for the second time in his career on Thursday.

After winning this award in 2014, Elimimian played just seven games in 2015, missing most of the season with an Achilles injury. He returned to his dominant self in 2016, leading all CFL defenders with 129 tackles and added eight sacks.

This is the third year in a row that the Lions have taken home the top defensive player award, as Adam Bighill won last year. BC also won this award three years in a row between 2006 and 2008 when Brent Johnson (once) and Cam Wake (twice) were honoured.

“I’m tremendously proud of this award tonight,” said Elimimian. “The hours it took to return to the field were long and the work required to reach this level again was tremendously difficult, but tonight would not possible without the help of my teammates, coaches and support staff. This is a reflection on all of our efforts and I’m honoured to accept it on behalf of our entire organization.”

Also honoured on Thursday was Lions wide receiver Marco Iannuzzi, who was awarded the Tom Pate Award for community service.

“It’s special to me and my family because of the sacrifice of time,” said Iannuzzi. “Every time I go to an event I’m taken away from my family. To be rewarded is not why I am doing it, but to see the league recognize the sacrifice and time I’ve put in means a lot to me, my wife and kids.”