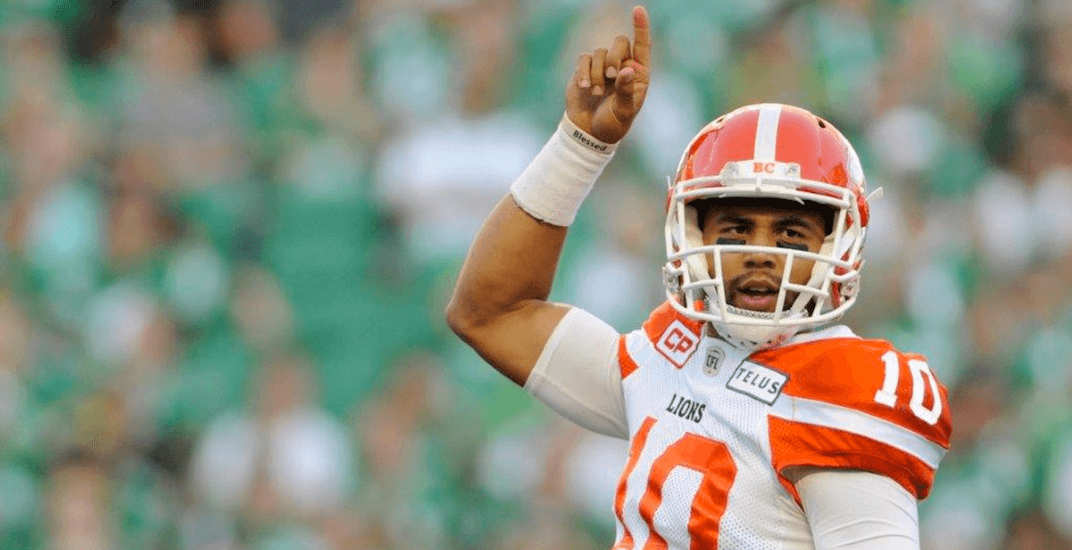 Prior to the game, TSN’s cameras in the Lions’ locker room caught the veteran coach as he was chastising his team. “They don’t want to listen,” he said.

His intuition was right, because Sunday was a write-off for the BC Lions.

The Lions were in Saskatchewan taking on the same Roughriders they beat 30-15 last week in BC. This week was a different story, as BC was completely outmatched, losing 41-8.

Jonathan Jennings’ return to the Lions lineup did not go as planned.

Cue the quarterback controversy for @BCLions

Don’t call it a controversy… Yet.

In what was his first appearance since getting injured in BC’s win over Hamilton almost a month ago, Jennings didn’t even make it to halftime before getting yanked.

He called it the toughest game of his life.

It took the Lions 21 minutes to get a first down in the game. They already trailed 22-0 by that time.

Once Wally Buono finally pulled the plug on Jennings, he was 3-for-10 with only 45 passing yards and three interceptions (all of them by Ed Gainey).

Quite frankly, it was tough to watch.

Jennings refusing to be patient. I'm not a "short leash" guy. But he's forcing Wally to think about Plan B. #BCLions @CFLonTSN

Travis Lulay went into the game with five minutes left in the second quarter, but things didn’t get much better.

The veteran QB did manage five completions on nine throws for 54 yards, but the Lions failed to close the gap heading into the half.

Jennings back in at QB to start second half.#CFLGameDay

Then to start the third quarter, Jennings got the nod to go back in the game.

Things started out alright, and a great run after a catch by Jeremiah Johnson put the Lions within 10 yards of a touchdown.

Then things continued to derail. After a failed run attempt, a Jennings pass hit off Chris Williams and was picked off for yet another interception.

Any momentum the Lions had was instantly gone, and any hope at a comeback was pretty much snuffed out on that play.

Jennings finished the game throwing 14-for-30 for 195 passing yards, with one touchdown pass and four interceptions.

To continue the juggling act, 24-year-old QB Alex Ross was put into the game in the final three minutes. His only completion was to a Roughrider, as Gainey recorded his fourth interception of the game (a Roughrider record) in the dying moments.

Ed Gainey sets a @sskroughriders record and becomes the first player in the @CFL with four interceptions in one game since 1986. #CFLGameDay pic.twitter.com/Vl9tYGT1CK

To make matters even worse, Nick Moore, who sits second in receiving yards among BC receivers, left the game with an injury and did not return.

Nick Moore has a back injury. Will not return. #BCLions @CFLonTSN

So yeah… nothing went right in this game.

The Lions started with a disadvantage from the get-go when it was revealed their top receiver Bryan Burnham was sidelined due to injury.

Bryan Burnham just limped off the practice field. Didn't see what happened but right foot is getting looked at. #BCLions

Burnham reportedly sustained a toe injury a few days ago during practice. It isn’t believed to be too serious, but it was enough to take him out of this week.

It’s been a great season for the 27-year-old receiver. He sat fourth in the CFL in receiving yards entering the week, and first on the team by over 100 yards.

He’s a huge piece to this team, but nobody expected the Lions to completely fall apart without him like they did tonight.

Hopefully Burnham is ready to go for next week.

No help on D

The Lions offence has been up and down this season, but for most of the way they have been able to rely on consistent defence to bail them out.

That wasn’t the case tonight.

Saskatchewan seemed to have complete and utter control of the game. The Riders ran and passed the ball with ease. They allowed Kevin Glenn – yes, Kevin Glenn – to throw for 320 yards.

The lone positive in the game was a 56-yard touchdown pass by Jennings to Williams, that broke the shutout.

The @BCLions are on the board thanks to Chris Williams’ (@cwillkl80) 56-yard touchdown, his first as a Lion. #CFLGameDay pic.twitter.com/BKMbduSP4n

The Lions will have to put this one behind them as they have a quick turnaround, playing against the Calgary Stampeders at BC Place on Friday.