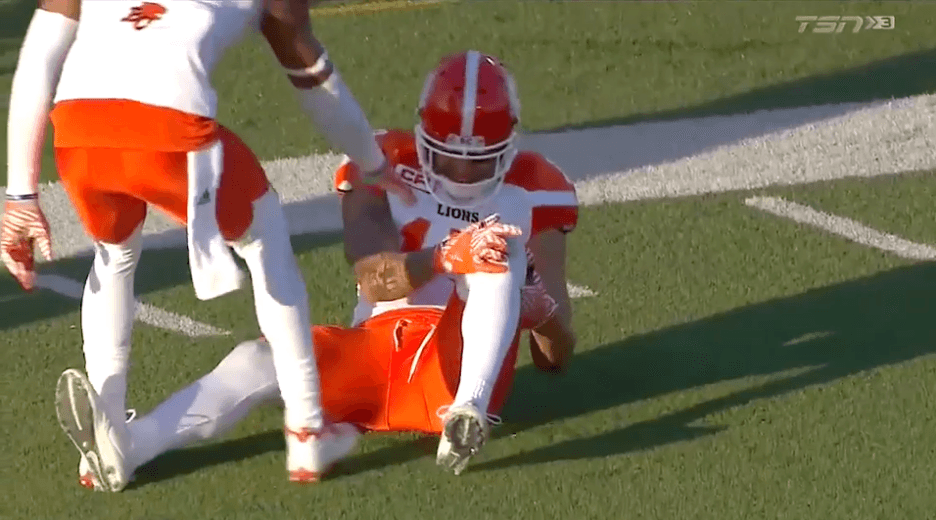 The BC Lions have received some crushing news, as they have learned that wide receiver Nick Moore has a torn ACL, according to a report from The Province’s Mike Beamish.

TSN’s Farhan Lalji confirmed the report, adding that Moore will be gone for the remainder of the season.

Moore suffered the injury during Saturday’s 40-27 win over the Saskatchewan Roughriders.

Moore, who had just caught a 30-yard touchdown pass from Jonathon Jennings to give BC a fourth quarter lead, injured his leg on his celebration.

The celebration looked innocent enough, as Moore jumped and bumped shoulders with teammate Loucheiz Purifoy. It’s the type of celebration you see all the time in a football game, except this one ended brutally for Moore.

This will be a huge loss for the Lions.

After two years in Winnipeg, Wally Buono brought Moore back to the organization this season and it looked to be exactly what the team needed. Through four games, Moore racked up 205 yards receiving and one touchdown, helping the Leos to a surprising 3-1 record.

The Lions, who are in the middle of a bye week, will need to truck on the rest of the season without the services of Moore.

The West Division-leading Lions play next in Calgary on Friday, July 29th.