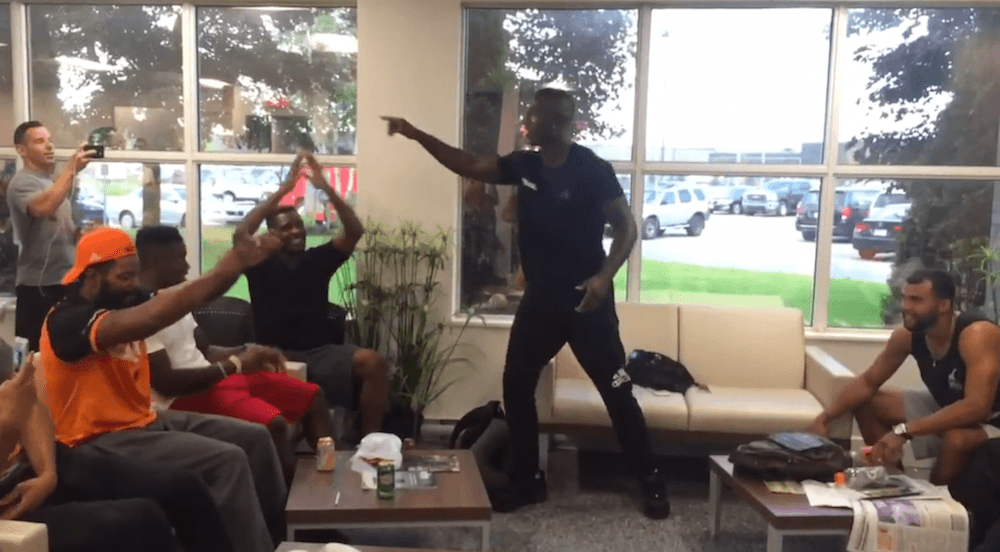 After the BC Lions’ big 38-18 victory over the Montreal Alouettes on Thursday night, the Lions were hit with a huge flight delay due to a mechanical issue with their flight.

After many hours of waiting in the airport terminal, the team, including 50 orange-clad supporters who came along as part of a fan trip excursion called ‘Operation Orange’, checked into a Montreal hotel around 4:30 am.

Lions’ Digital Content Coordinator Matt Baker and an ‘Operation Orange’ member didn’t seem to to mind the sudden alterations in the itinerary.

Probably the coziest hotel bed I'll sleep in all season! Getting stuck an extra night wasn't so bad after all! #BCLions #RoadLife

So our plane is broken and now we get to spend another night in Montréal! 😂 #ExtendedTrip #MoreBonding #OperationOrange 😊

Once they were back in the terminal the next day for a scheduled 3:30pm departure from Montreal, the Lions’ decided to kill time after what ended up being a 14-hour flight delay with a little jam session led by wide receiver Stephen Adekolu. Just goes to show that the Lions are entertaining both on and off the field this year.

As part of the jam session (you can see QB Jonathan Jennings playing drums with a couple of Gatorade bottles and a coffee table), Adekolu thanked the fans for their support.

One hour later, it was finally time for everyone to board for the charter flight back home.

Well it’s been a slice Montreal.. It appears we almost have lift off! ✈️✈️🏈🏈pic.twitter.com/7Wv2JppUnE

The flight included a fuel stop in Winnipeg, with a nice flyover of Investors Group Field, where the Blue Bombers call home.

Luckily the Lions played Montreal on a Thursday, rather than on the weekend which could’ve cost them a day of practice. BC hosts Hamilton next Saturday, Aug.13, so they could afford this travel disaster that reminded many of the movie Planes, Trains, and Automobiles.

HOME! Only 24 hours and change after the final whistle!🏈✈️ pic.twitter.com/YbSS2IN9J2