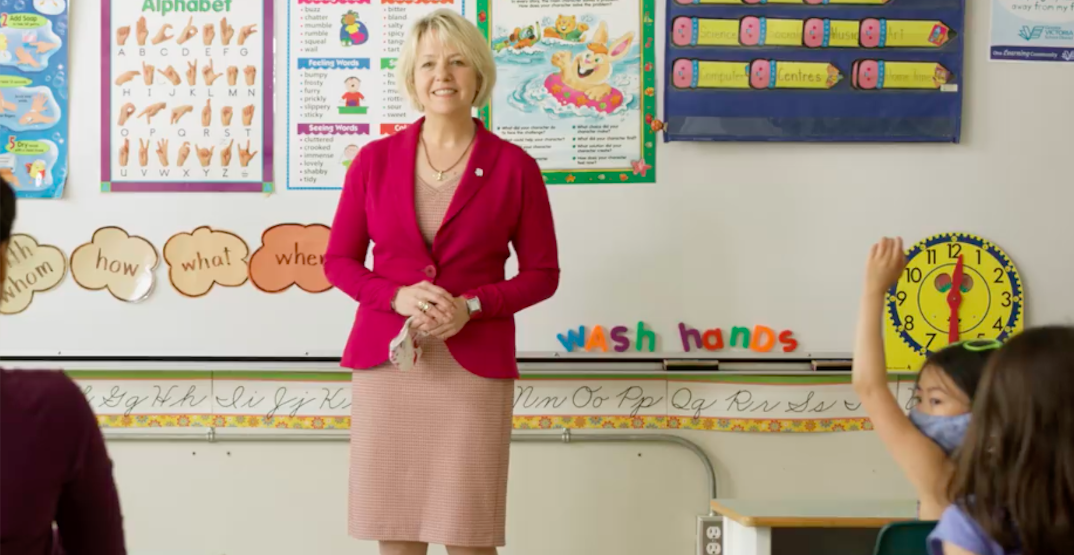 BC’s Provincial Health Officer Dr. Bonnie Henry said on Monday that the scenes depicted in a new ad from the BC government shouldn’t be taken as a literal representation of what to expect.

“It was not a commercial about what a classroom was going to look like,” said Henry.

“What that was, was me as the public health officer talking with children and their parents about the things that they can expect in the new school year – about some of the public health issues, and it was a conversation that I had with – there were more than six children – we had it in a classroom because that’s what the children wanted, and it was an opportunity to answer the many questions that I was getting from children.”

Her comments come after the video face some criticism that the images in the ad did not paint a realistic picture of what people can expect once school is back in session.

Henry said the ad was an opportunity “for us to speak to children about some of the things that will be new and different, and help answer their questions they had about what would happen.”

She stressed again that the ad was not meant to represent every learning environment.

“We recognize that every class around the province looks different,” she said.

During the filming of the ad itself, Henry said, “we all had masks, and there was a conversation about when we were going to wear them, but each child made their own decision about when they were going to wear a mask, and some of them wore them the whole time we were together, and some put them on and off at times when they needed to wear them. This again reflects what we are going to be seeing again in a few weeks.”

For his part, BC’s Health Minister Adrian Dix said he thinks it’s important for people to recognize that “this ad is a public health ad, and its intention is to deliver a public health message about what people can expect when they return to school.”

The effort of the ad, he said, “is not to engage in – let’s face it – a robust debate about the back to school plan,” but instead “for the public health officer to deliver a public health message to people in the province who may not hear us here at 3 o’clock, but need to hear that message, because school will look different this year, we all know that, [and] we know there is very significant anxiety around back-to-school.”

Dix and Henry’s comments come the same day it was announced that 294 new coronavirus cases had been confirmed in the province since Friday.

By specific health region, Henry said this equates to 1,900 known cases in Vancouver Coastal Health, 3,042 in Fraser Health, 175 on Vancouver Island, 440 in Interior Health, 154 people in Northern Health, and 79 from those who reside outside the province.

The latest cases bring the total number of recorded cases in the province to 5,790.