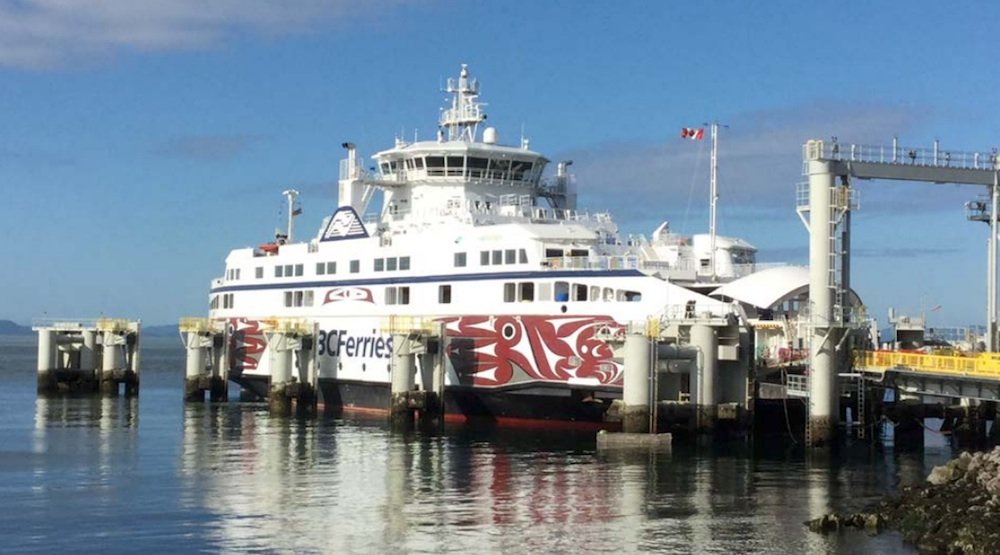 Exterior view of the new BC Ferries Salish Eagle vessel at Tsawwassen Ferry Terminal. (BC Ferries)

After traveling from its European shipyard where it was built and performing weeks of sea trials in BC, the second of three new Salish Class vessels on the BC Ferries served its first passengers today.

The Salish Eagle made its inaugural sailing this morning on the Tsawwassen to Southern Gulf Islands route following a ceremonial ribbon cutting. It replaces the 1964-built Queen of Nanaimo, which will be decommissioned.

Built at a cost of $165 million, all three sister vessels are 107 m long and have a capacity for up to 600 passengers and crew and 145 vehicles. They are distinctly wrapped with unique First Nations art.

These are also the first vessels in the fleet with the capability to operate on dual fuel on either diesel or LNG, which is cheaper and more environmentally friendly than traditional maritime fuels.

Salish Orca, the first vessel to arrive from Remontowa Shipbuilding S.A. in Gdansk, Poland, went into service last year on the Powell River to Comox route. The last vessel, Salish Raven, will begin service later this year and replace the MV Queen of Burnaby.

The same Polish shipyard will also be retrofitting the fleet’s largest vessels – the Spirit of Vancouver Island and Spirit of British Columbia – at a cost of $140 million over the next two years.