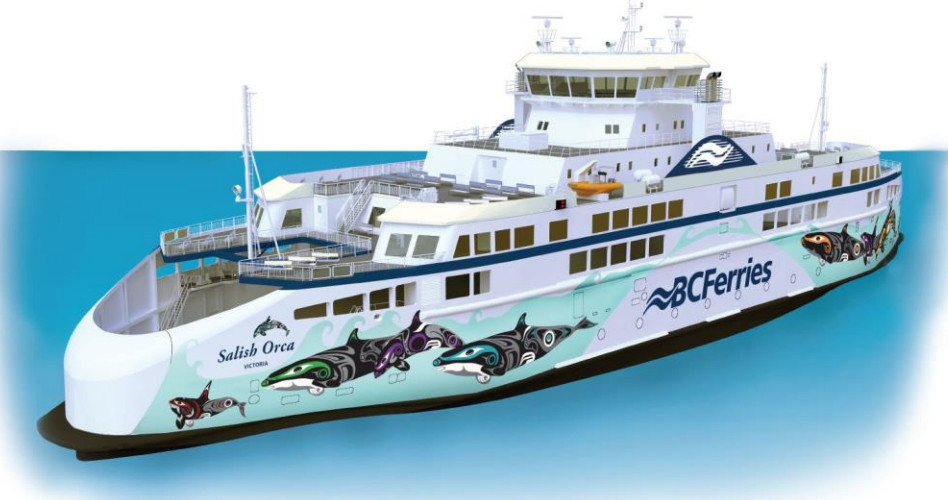 Earlier today, the ferry corporation unveiled the designs for the first vessel to be ready for service, the Salish Orca. Esquimalt Nation member Darlene Gait’s design of orca whales and wolves of legends was selected from a group of nine finalists. Some areas of the interior of the ferry vessel will also be decorated with the art designs.

“[Gait’s] creative vision will travel the Salish Sea for many years to come, creating greater awareness of First Nations arts for the general public and B.C. visitors,” said Cathi Charles Wherry, Arts Program Manager at the First Peoples’ Cultural Council, in a statement. “It has been an honour to work with the artists and BC Ferries on this project and we are so looking forward to seeing the other two artistic designs revealed later this summer.”

The three new mid-size vessels – Salish Orca, Salish Eagle, and Salish Raven – are currently being built at Remontowa Shipbuilding S.A. in Gdansk, Poland at a cost of $165 million. The vessels were given First Nations names last summer to recognize the Coast Salish people as the original mariners of the Salish Sea, the bodies of water that include the Strait of Georgia, Strait of Juan de Fuca, and Puget Sound.

The Salish Orca will arrive this summer and operate on the Comox to Powell River route. The remaining two vessels, the Salish Eagle and Salish Raven, will arrive between October 2016 and February 2017 and service the Southern Gulf Islands, effectively replacing the 1960s-built MV Queen of Burnaby and MV Queen of Nanaimo.

Each 107-metre-long vessel will have a capacity for up to 600 passengers and crew and 145 vehicles. These vessels will be the first in the entire ferry fleet to be able to operate on dual fuel, on either diesel or LNG. The aim is to switch the ferries to using LNG, which is cheaper and more environmentally friendly, while also retaining diesel capability.

Last week, B.C. Ferries awarded the same Polish shipyard a $140 million contract to renovate the fleet’s current two largest vessels – the Spirit of Vancouver Island and Spirit of British Columbia. The contract includes the conversion of the engines on both vessels to dual fuel and interior retrofits to improve passenger comfort.