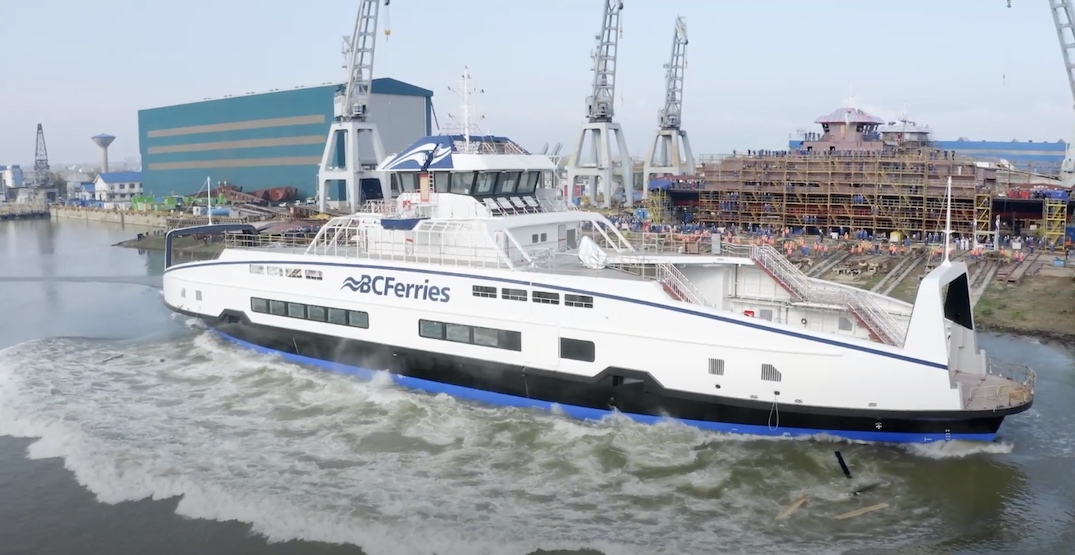 BC Ferries’ third Island Class vessel launches at Damen Shipyard in Romania on October 28, 2020. (BC Ferries)

BC Ferries sees a very bright future with battery-electric ships, and the next big batch of these vessels could potentially be built in Canada.

But there is one major caveat: building these ships at home is only possible if the federal and provincial governments are able to provide additional funding for the higher cost.

A spokesperson for the ferry corporation told Daily Hive Urbanized a proposal for a strategy to fully electrify the Island Class ferries will be submitted to senior governments later this month.

The Island Class vessels are hybrid diesel-electric vessels intended to operate on minor routes. The first two vessels — each holding up to 400 passengers and about 50 vehicles — went into service last year, and another four vessels will arrive later this year through 2022.

Under the strategy, BC Ferries plans to order an additional seven Island Class vessels, which would bring the total fleet size of this specific vessel type to 13 ships, accounting for one-third of the entire ferry fleet. 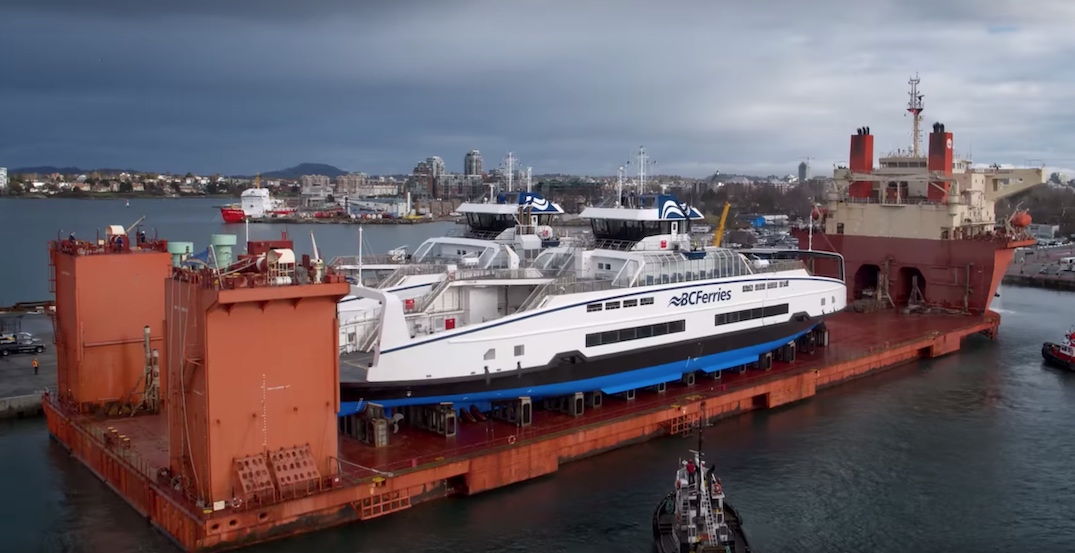 This would turn BC Ferries into “one of the most environmentally sustainable ferry operations in the world,” reads a backgrounder on the proposal.

“Fully electrifying BC Ferries terminals and Island Class vessels is a significant step to transition the fleet away from fossil fuels and reduce GHG emissions.”

These changes to the first six vessels and the terminal renovations are considered Stage One, and carry a cost of about $150 million. This will take between two and three years to complete.

Stage Two carries the weight of the entire strategy, specifically its $1.04 billion cost, which would bring the entire Island Class electrification strategy to a total cost of $1.19 billion.

There is a cost premium to building the seven additional vessels in Canada, as shipyards in the country do not have the same economies of scale as the larger and active European shipyards. The Romanian shipyard facilities of Dutch company Damen Group are behind the construction of the first six Island Class vessels. 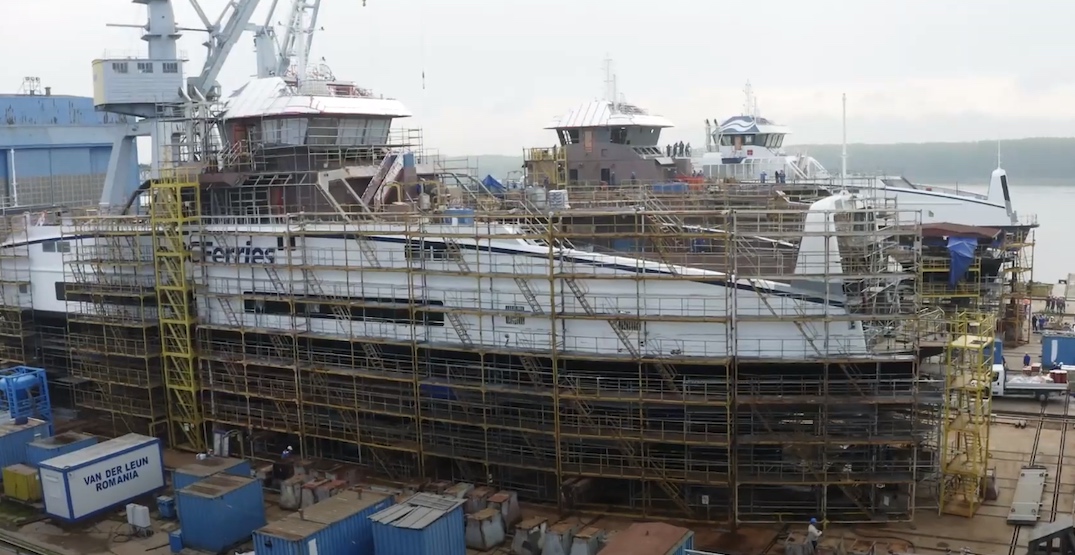 BC Ferries’ new Island Class vessels under construction at Damen Shipyard in Romania. (BC Ferries)

Most of the new ferry vessels introduced for operations in BC over the past two decades — whether it be for BC Ferries, TransLink, or the BC Ministry of Transportation and Infrastructure’s interior operations — were built by international shipyards.

Over the years, BC Ferries’ procurement processes for new vessels invited Canadian shipyards to bid, but on most occasions, companies in the country chose not to submit a bid.

For instance, the procurement process for the four Island Class vessels, currently under construction, resulted in responses from 18 international shipyards. From the expressed interests, nine companies were shortlisted and invited to submit a bid. Damen Shipyards, the builder of the first two vessels, was ultimately selected to build the additional order at a cost of $200 million.

Canadian shipyards previously stated their preoccupation with the federal government’s $70-billion National Shipbuilding Procurement Strategy as one of their reasons to forego the contract opportunities with BC Ferries. 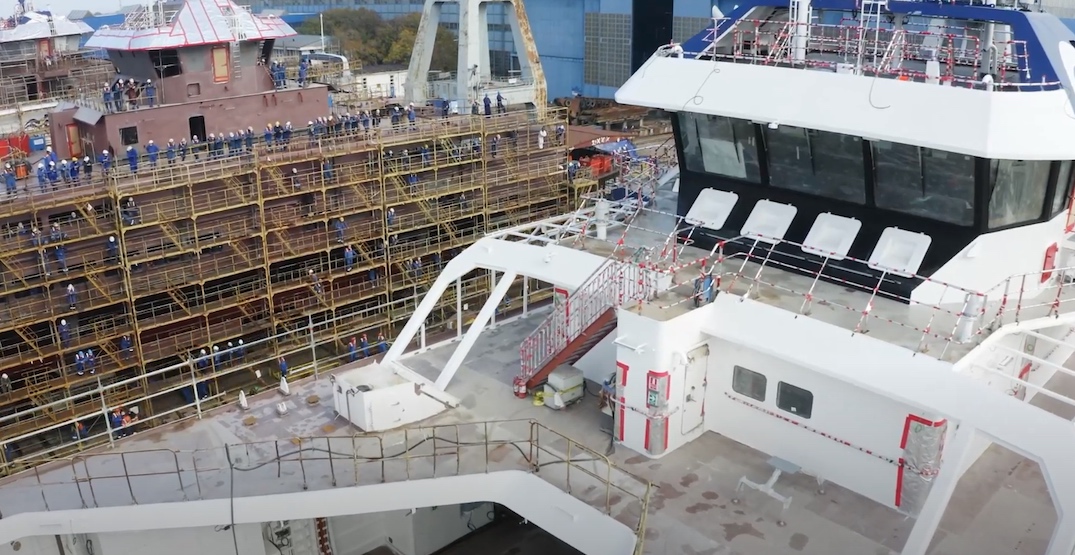 BC Ferries’ third Island Class vessel launches at Damen Shipyard in Romania on October 28, 2020. (BC Ferries)

This latest push from BC Ferries for “Made In Canada” ferries is in response to the provincial government’s directives. The BC NDP made a platform promise during last fall’s provincial election to “launch a long-term BC shipbuilding strategy to create good jobs and bring more work to BC shipyards.”

If this Canadian-built approach proceeds, it would be BC Ferries’ largest domestic vessel order since the failed trio of PacifiCat-class fast ferry vessels in the 1990s.

For the government, this could come as a COVID-19 stimulus investment, and help enable “market transformation for wide-scale adoption of clean electricity as a transportation energy source.”

Stage Two also includes the cost of modifying an additional nine terminals to accommodate the vessels and outfit them with rapid charging systems, which would contribute to “research and development in the standardization of rapid charging for marine electrification.” This brings the total number of terminal retrofits to 18 locations.

The entire timeline for Stage Two spans between five and seven years.

BC Ferries also has plans to build five new large vessels for routes serving Metro Vancouver to replace the aging C-Class vessels built in the 1970s and 1980s.