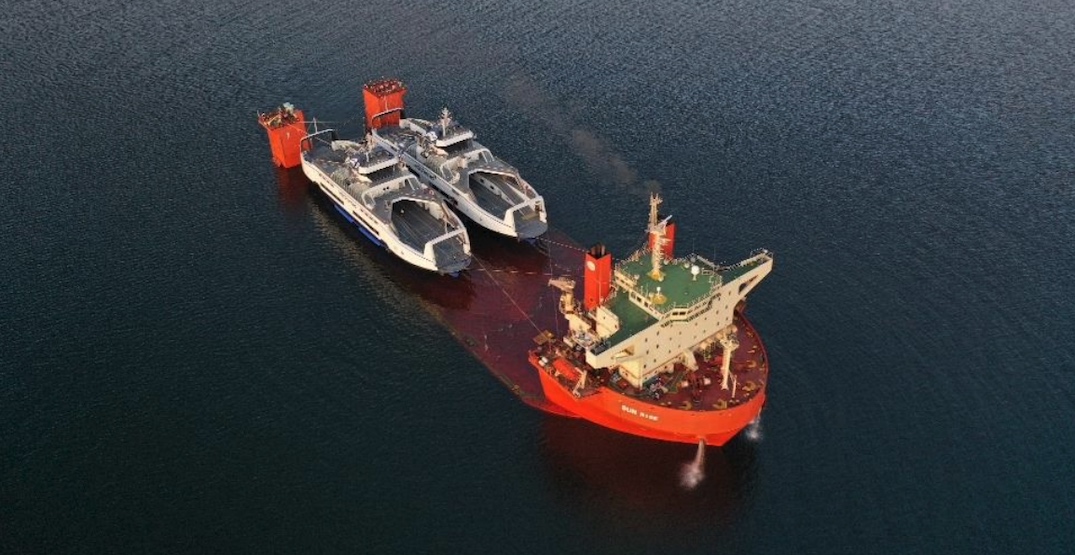 BC Ferries' first two Island Class hybrid-electric vessels loaded onto the Sun Rise for delivery from Romania to BC on November 20, 2019. (BC Ferries)

BC Ferries says the Island Class ferries were loaded onto the Sun Rise, a semi-submersible ship, in Constanta, Romania today for their 10,305-nautical-mile journey to Victoria.

One of BC Ferries’ first Island Class hybrid-electric vessels. (BC Ferries)

They will be making a Transatlantic voyage of about 45 days, depending on weather, with one stop for refuelling before or after transiting the Panama Canal, where the Sun Rise will then sail up the west coast of North America.

Both ferries were loaded onto the big transport ship, which partially submerges to allow the vessels to be gently floated into place. When the vessel cargo is positioned and secured, the ship is refloated by pumping water out of its ballast tanks.

Upon arrival in local waters, the ship will be resubmerged to allow both ferries to float off. 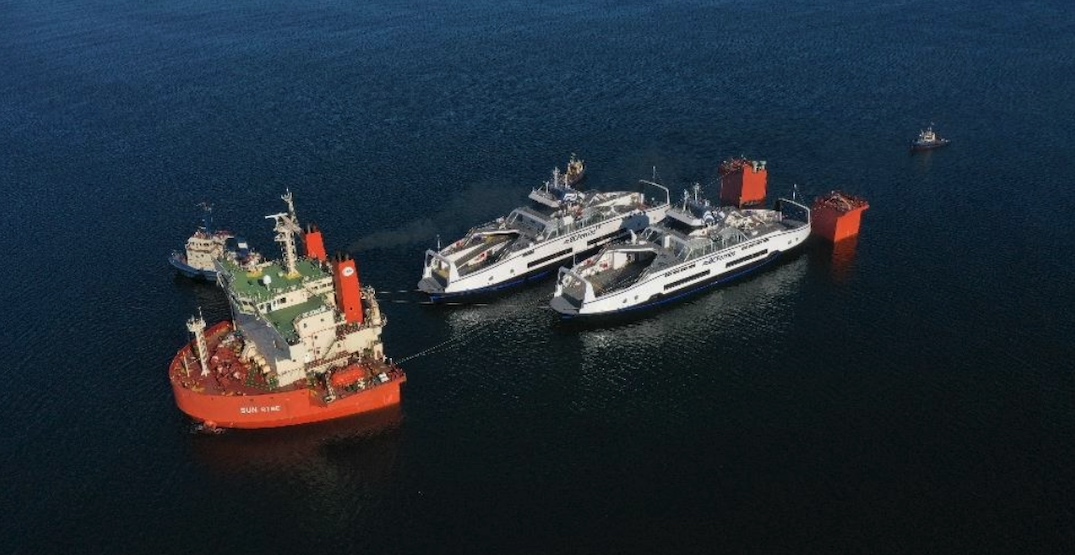 BC Ferries’ first two Island Class hybrid-electric vessels loaded onto the Sun Rise for delivery from Romania to BC on November 20, 2019. (BC Ferries)

Damen Shipyards Group of the Netherlands designed and built the vessels, and is responsible for the delivery and commissioning.

By the middle of 2020, the vessels will be used on the routes from Powell River to Texada Island and from Port McNeill to Alert Bay to Sointula Island.

These all-electric Island Class ferries will initially operate on their low-sulphur diesel hybrid systems, before eventually transitioning to electric charging when the technology matures. Each vessel will have the capacity to carry at least 47 vehicles and between 300 and 450 passengers and crew, depending on configuration.

One of BC Ferries’ first Island Class hybrid-electric vessels. (BC Ferries)

Early this month, BC Ferries an additional order of four Island Class hybrid-electric ferries from Damen Shipyards Group in a deal worth $200 million. Arriving in 2022, the vessels in this second batch will serve the routes from Campbell River to Quadra Island and from Nanaimo Harbour to Gabriola Island. This deployment effectively replaces one larger ship with two smaller vessels on each of these routes, providing more frequent service and increased passenger capacity per hour. It will result in shorter vehicle queues, improved safety, and reduced road congestion.