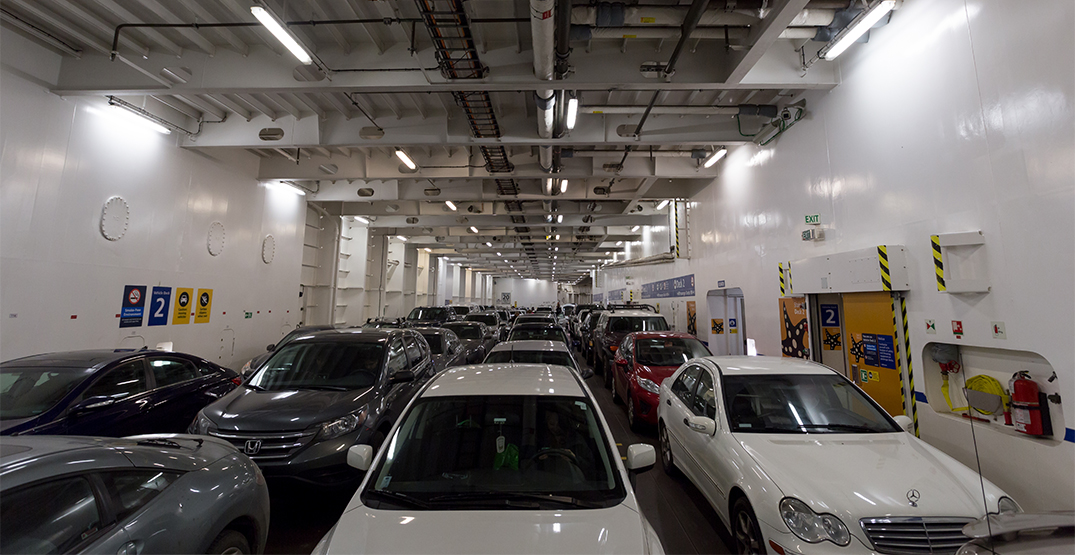 After a letter was sent to Transport Canada by the union representing BC Ferries workers, imploring the agency to change its policy of passengers being required to exit their vehicles on the enclosed lower deck vessels during crossings, Transport Canada is holding firm in its position not to do so.

Transport Canada spokesperson Sau Sau Liu told Daily Hive the agency had received the letter, but there are no plans to make any policy changes.

Canada was one of the few jurisdictions to briefly allow passengers to remain on enclosed vehicle decks as a temporary measure last year at the start of the COVID-19 pandemic.

However, this temporary measure was rescinded in September 2020.

“No country in the world allows people to remain in their vehicles on enclosed vehicle decks,” said Liu.

The reason, said Liu, is that in addition to vehicles on enclosed decks, other “bulk and dangerous” goods are often stored.

“If an emergency were to happen – say a fire, flooding or collision – evacuating everyone safely would be extremely difficult,” Liu furthered. “In fact, the loss of life could be catastrophic.”

The agency’s response comes after the BC Ferry and Marine Workers’ Union president, Graeme Johnston, sent a letter to the agency requesting a reconsideration of the police, citing recent developments in the COVID-19 pandemic.

“We believe the increased risk of COVID-19 infection from highly contagious virus variants… may outweigh the risks of passengers remaining in their vehicles on enclosed decks in many circumstances,” Johnston wrote.

Liu, however, said BC Ferries passengers “do not need to choose” between personal safety and marine safety.

“By physical distancing, wearing a mask and leaving the enclosed vehicle deck while the ferry is operating, passengers and crew can stay safe,” said Liu. “Everyone must do their part to keep fellow Canadians and our transportation system safe.”

Last month, BC Premier John Horgan said the province was in talks with the federal government about the policy.

“I would prefer people stay in isolation in their car rather than going into a communal area where they can contract COVID-19,” Horgan said at the time.