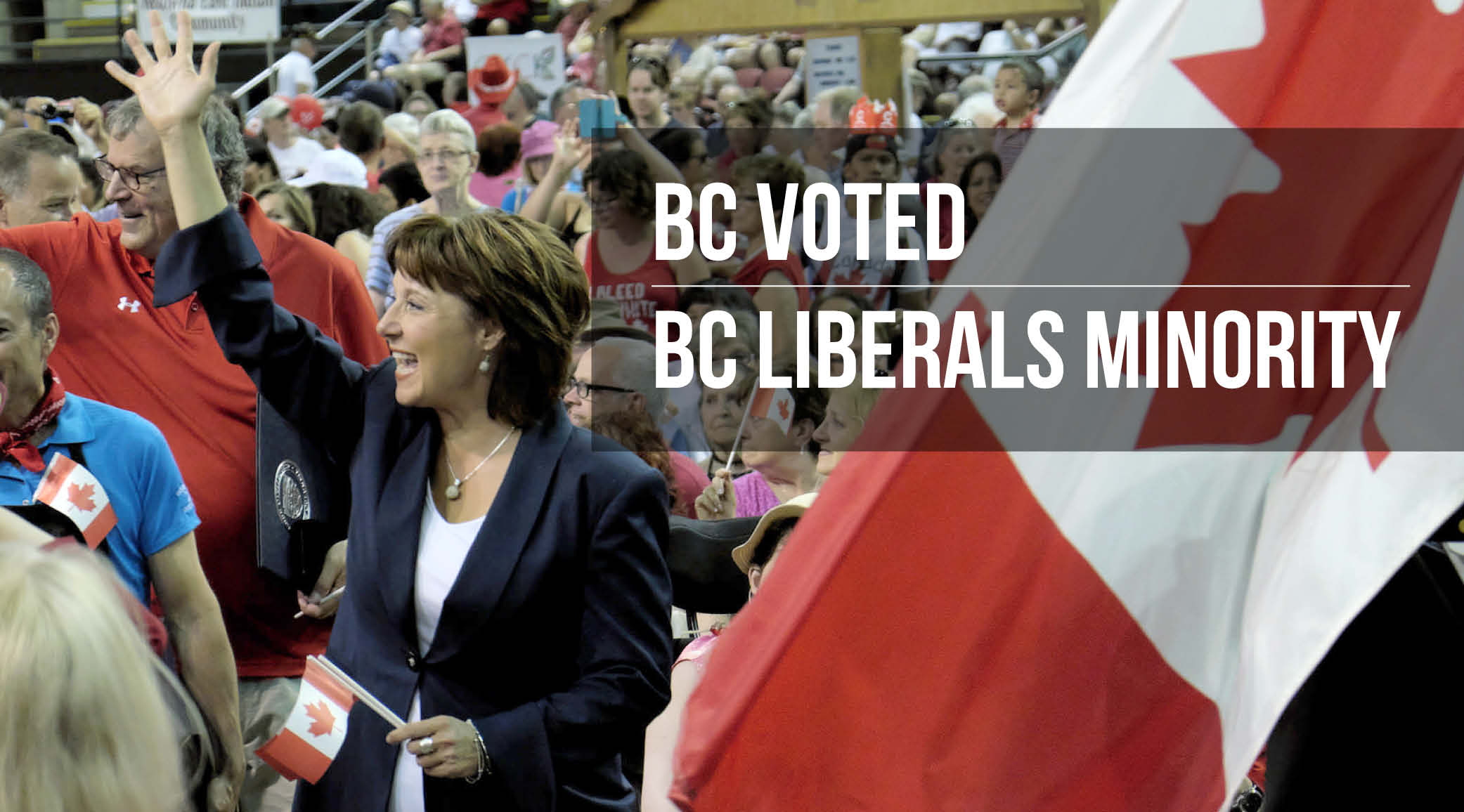 Christy Clark’s BC Liberals have ‘won’ a minority, the final vote count has revealed weeks after the BC election.

The election result had been hanging in the balance for two weeks, after five ridings proved too close to call on election night, leaving BC with a hung parliament.

However, after the final count was completed this week, taking into account absentee ballots and recounts, it emerged the BC Liberals have 43 seats.

Meanwhile, the BC NDP have 41 seats and the BC Greens hold three seats. Since no single party has a majority, Parliament is still hung.

As for the parties’ share of the popular vote, it was extremely tight.

However, under the first-past-the-post voting system, the popular vote is not taken into account when determining legislature seats, only the winners of each riding.

Christy Clark: A responsibility to govern

In a statement released ahead of the completed count, Clark congratulated all candidates and said the BC Liberals had a responsibility to form a government:

“I want to congratulate all candidates, from all parties, who put their names forward to run. It’s not easy, and they deserve our gratitude for working to make our province even better.

“With 43 BC Liberal candidates elected as MLAs, and a plurality in the legislature, we have a responsibility to move forward and form a government.

“The final result reinforces that British Columbians want us to work together, across party lines, to get things done for them.

“Our priority is to protect our strong economy and to manage BC’s finances responsibly, while listening closely to British Columbians on how we address important social and environmental priorities and how we can make BC politics more responsive, transparent, and accountable.

“The work is just beginning. My team and I look forward to delivering positive results for British Columbians.”

John Horgan: Let’s do this as quickly as possible

At a press conference after the final count was announced, BC NDP leader John Horgan told reporters Clark and the BC Liberals had “come up short.”

He also said he’d had productive discussions with the BC Green Party and its leader Andrew Weaver and he was “optimistic” about what they could offer if they worked together.

Horgan said he understood everyone was wondering when this election would be over and he would be speeding up discussions to “get going on this as quickly as possible.”

“The election is over today, with the confirmation that the BC Liberals do not command a majority of seats in the legislature,” said Horgan.

“The challenge now is to demonstrate to the public that I can make that happen.”

Speaking to reporters from Victoria, BC Greens leader Andrew Weaver said he had been negotiating with both parties and hoped to have an agreement by next Wednesday.

Weaver said the BC Greens were speaking to the BC Liberals as well as the BC NDP, because it was important to bring certain issues to each party and negotiate “in good faith.”

“I very much enjoy negotiations,” said Weaver. “It’s important that we present our position, they present their position.

“We find commonalities to build on, you agree on something, then repeat. So that’s the process and we’re looking forward to that.”

The agreement could last up to the full term of four years, said Weaver.

“We recognize British Columbians have placed the responsibility on us to do the right thing.”

Where do we go from here?

In British Columbia, there is no automatic appointment to government for a party that wins the most seats in an election, whether they have a majority or not.

Under the parliamentary system, the governing party is appointed by Lieutenant-Governor Judith Guichon, the Queen’s representative here.

Guichon’s role is to ask the leader of the political party that has the support (or confidence) of a majority of the legislature to form a government.

Since it is not clear which party has the support of a majority, the next BC government now depends on party negotiations to gain support across the aisle.

The BC Liberals and BC NDP will likely look to the BC Greens for that support, or perhaps to any MLAs willing to cross the floor to bolster numbers.

In the end, Lt.-Gov. Judith Guichon will either ask Clark to form the next government or accept Clark’s resignation should another party prevail in negotiations.

However, if Clark is asked to form a new government, and MLAs pass a vote of no confidence in her, then she would be forced to resign.

This would pave the way for Guichon to ask John Horgan to form a government and undergo the same test of confidence.