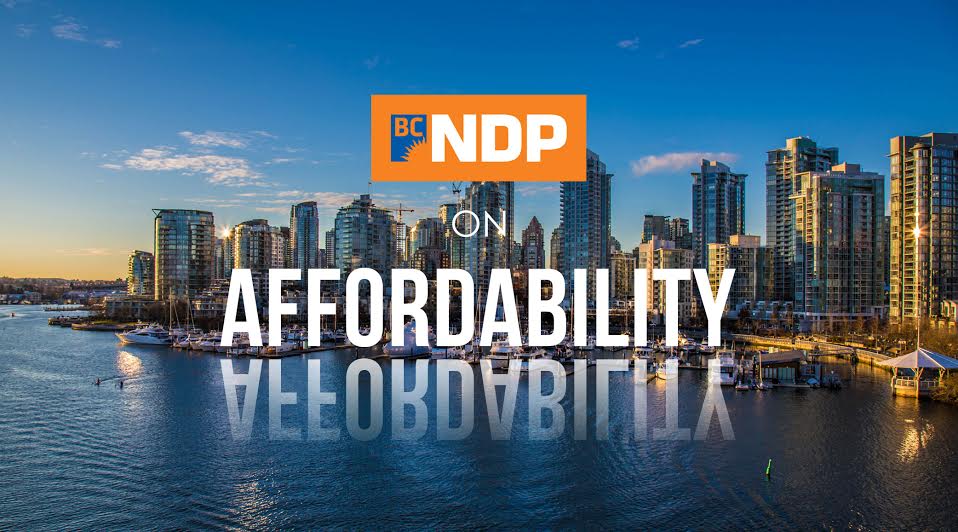 Life in Vancouver is expensive–and the rest of BC is heading that way too. As we head towards the BC Election on May 9, the issue of affordability is everything.

Of course, the three parties have their own strategies for making BC more affordable. Here’s what the BC NDP told Daily Hive about their plan.

“John Horgan and the BC NDP will work for you and take real action to make your life more affordable – like reducing or eliminating fees, tolls and fares, while bringing in $10 a day childcare.”

The BC NDP plans to introduce $10/day full-time and $7/day part-time childcare, with no fee for families with annual incomes below $40,000 a year.

At first the program would initially focus on children under the age of two, before expanding to cover other pre-kindergarten children.

Meanwhile, the party has also committed to halving MSP premiums in 2018 for households earning up to $120,000, and ending the premiums totally within four years.

The BC NDP says a non-partisan MSP Elimination Panel would advise on how to protect healthcare funding.

The BC NDP is also promising to make all student loans interest free immediately, and award $1,000 to every BC student completing a study, occupational, or trade program.

As well, the party would eliminate fees for Adult Basic Education and English as a Second Language courses, and keep a cap on tuition fees at colleges and universities.

Under the BC NDP, the minimum wage would gradually increase to $15 by 2021, after which it would be indexed to inflation.

And, when the price of carbon goes up, the party would create a new climate action rebate cheque for low and middle income families.

Meanwhile, drivers would save money on the bridges, with the BC NDP planning to eliminate all tolls for the Port Mann and Golden Ears bridges.

And the BC NDP also plans to stop a potential 42% ICBC rate increase anticipated by 2020, as well as freezing BC Hydro rates.

For ferry riders, the BC NDP would decrease fares by 15% on small ferry routes and freeze fares on major routes, with seniors getting a 100% discount on weekdays.

Finally, the BC NDP is promising to raise income assistance and disability rates by $100/month, and provide an extra $10 million for youth aging out of care.