UPDATE: A fifth earthquake with a magnitude of 5.7 struck the same area at 7:13 pm.

Another moderately powerful earthquake has been detected off the coast of Vancouver Island, making it the fourth tremor today since the cluster this morning.

The US Geological Survey says a magnitude 4.1 earthquake hit an area on the Explorer Plate at 1:05 pm PST today, approximately four hours after the third earthquake of the day hit the same area roughly 193 kms west-southwest of Port Hardy.

All four earthquakes had a relatively shallow depth of just 10 km. The epicentres of the earthquakes were on the western side of the Explorer Plate, where it borders the Pacific Plate, and approximately six kilometres apart from the epicentre of another tremor that occurred today.

Locations of the four earthquakes that struck off the western coast of Vancouver Island today. (Image by: US Geological Survey)

Today’s magnitude 4.3, 4.6. and 4.1 tremors were likely aftershocks from the initial event measuring magnitude 5.1.

Many of BC’s earthquakes in recent years have occurred within this area where the Explorer Plate is pushed by the Pacific Plate, forcing it to subduct under the North American Plate.

Here’s a historical map of detectable earthquakes off the coast of BC: 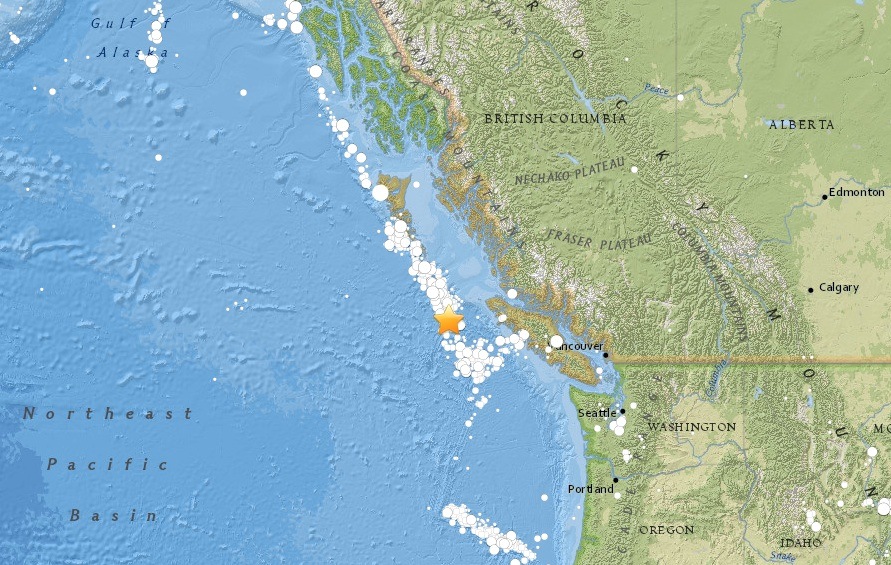 Image by: US Geological Survey