Needle and a drug. (Shutterstock)

There were 18 suspected drug overdose deaths throughout the month of July within the city of Vancouver, according to the latest update on the crisis from the Vancouver Police Department.

This figure is down from the 26 deaths recorded in June. However, based on data from the BC Coroners Service, there have already been 209 deaths in the city from January to June – almost exceeding the entire year-long total of 231 in 2016.

During the first week of August, there were at least three suspected overdose deaths and 144 calls in Vancouver. 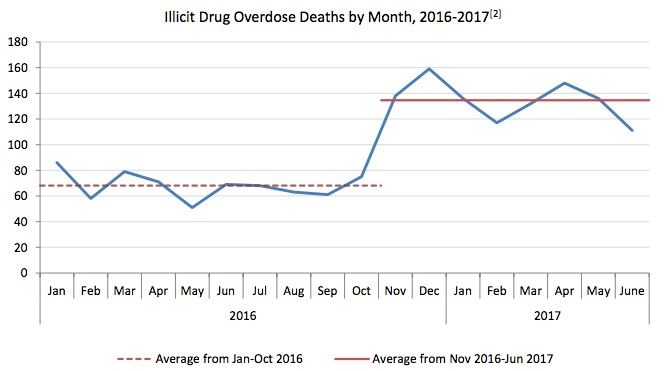 Illicit drug deaths by month in BC. (BC Coroners Service)

And across the entire province, the death toll has reached 780 during the first half of 2017, averaging at 130 per month. In contrast, there were 978 deaths in BC last year, with an average of 82 per month.

Men account for an overwhelming majority of the deaths, and Vancouver continues to be the epicentre of the crisis. 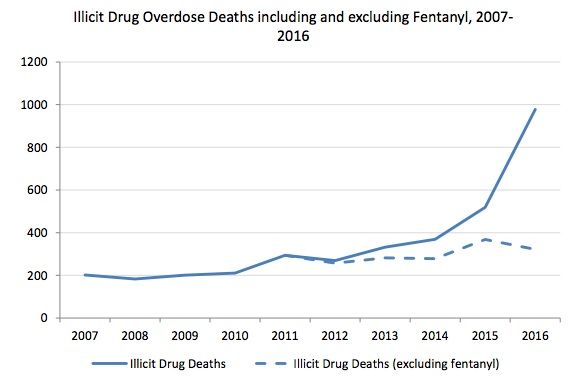 Spike from illicit drug deaths in BC from fentanyl. (BC Coroners Service)

The crisis continues to put a strain on emergency services. For instance, Vancouver Fire Rescue made 568 calls in July in response to overdoses, which is “extremely high” and consistent with the previous month.

Fentanyl is the leading cause in the spike in drug overdoses and deaths since 2012.

To better understand the crisis and who is most affected, the provincial government announced this week it will require coroners to complete an extensive document for every suspected overdose.

The so-called Unintentional Drug Overdose Protocol will collect information to help governments and non-profit organizations better reach those at risk of overdosing. 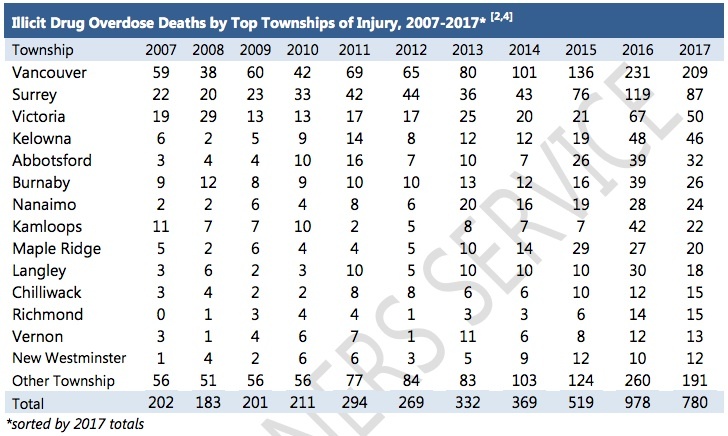 Illicit drug deaths by municipality, with 2017 accounting for the period from January to June only. (BC Coroners Service)