Provincial health officers have released the latest epidemiological modelling for the COVID-19 pandemic in British Columbia.

On Friday morning, the health officers shared the latest data, compared BC’s current state to previous projections, and explained how the provincial healthcare system was prepared to tackle upcoming challenges.

What health officers call “risk factor information” was available for nearly half of the total cases (707) and of that portion, 35.8% had underlying chronic conditions, such as cancer, diabetes, and cardiac diseases.

Just over half (53%) of total cases are female and reflects the heavy testing that’s being done on the healthcare population, which health officers say is mostly female.

The distribution of coronavirus cases in British Columbia by age (Gov BC).

Data was also presented revealing the distribution of coronavirus cases in BC by age. The blue bar is an actual representation of the population, while the yellow bar is the number of cases within that age group.

Cumulative diagnosed coronavirus cases in British Columbia compared to other countries (Gov BC).

Cumulative diagnosed coronavirus deaths in British Columbia compared to other nations (Gov BC).

When compared to international jurisdictions, BC’s number of cases and growth rate is dramatically lower, albeit not as low as countries such as South Korea or Singapore.

It has, however, flattened much more than the rest of Canada, despite being exposed to the virus at an earlier date. It’s also much lower than countries such as Norway or Germany.

Data for cumulative cases begins tracking as soon as the area’s rate reaches two cases per million, which was late January for BC. 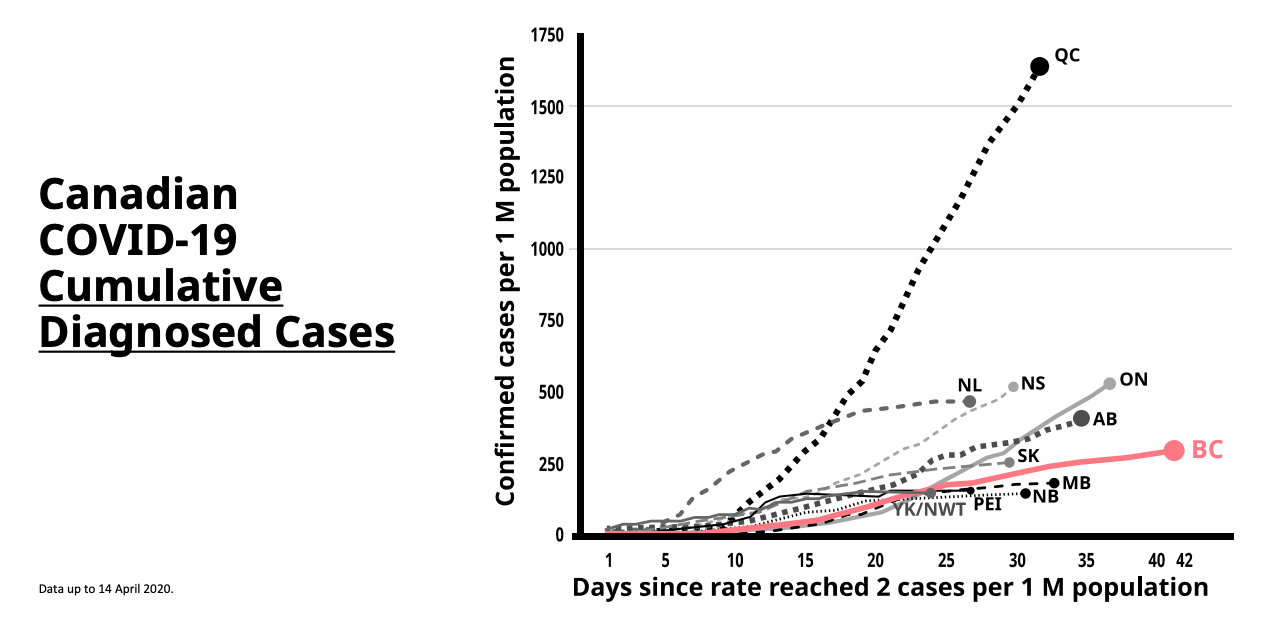 Case numbers in British Columbia compared to the rest of Canada (Gov BC).

The number of deaths from coronavirus in British Columbia compared to the rest of Canada (Gov BC).

When compared to other provinces in the country, BC’s case numbers fall out compared to Alberta, Ontario, and Quebec.

While the number of deaths is lower, they have yet to flatten out, reflecting an ongoing issue of outbreaks in long-term care homes.

A model presented by health officers on March 27, 2020, comparing British Columbia to three other jurisdictions (Gov BC).

Health officials say that in large thanks to public health measures such as physical distancing, travel restrictions, and banning large gatherings of people, BC’s tracking is much closer to that of South Korea’s.

BC’s actual new cases compared to the modelling of other jurisdictions (Gov BC).

While the province has come close to the point of 100 new cases within a day, the numbers have since decreased. As of recently, BC’s number of new daily cases has “flattened” and tracked around 50.

BC has a slightly higher number of critical care cases compared to South Korea. Health officials explain that it’s because patients are being put on ventilators earlier; studies have shown that early ventilation can lead to a faster recovery and less time spent overall in ICU.

Overall, officials say that BC’s epidemic curve is “well below” the projections based around Hubei and Italy, and that coronavirus cases have plateaued and started to decline.

Since the province’s numbers are dramatically lower, future models will be based solely on British Columbia’s experience alone.

In terms of hospital bed capacity, less than 50% of beds in the province are occupied. Vancouver Coastal Health and the Fraser Health area, which contain most of the cases within the province, have a 41.1% and 43.7% occupancy rate, respectively. Interior Health, however, has 66% of its beds occupied.

The province also says that there are 681 adult ventilators in the province, an increase of more than 200 since early March. This includes ones that have been refurbished and upgraded. There are also an additional 55 ventilators from the federal government that have arrived in BC but are still being checked and prepared to be put into use.

The effects of public health orders

Comparing the stringency and effect of public health measures in BC. The blue dot represents the strictness of measures implemented; the red line represents the number of cases per million (Gov BC).

While British Columbia’s stringency is similar to that of Canada’s, the rest of the country’s measures were implemented slightly more gradually and later on, especially in Quebec in Ontario.

Henry notes that Quebec, for example, had its March break two weeks before British Columbia did.

“We were in a different place in our pandemic,” she explains. “This helped.”

While strict measures were also put in place for Italy, it was done at a point when the growth rate in cases was already exponential. South Korea, on the other hand, implemented measures early but backed off, and has since had a minor increase in cases.

How human behaviour and activity has changed since the virus started. Decreases can be seen in activity within transit stations, workplaces, and retail and recreation, while there are increases in parks and residential dwelling(Gov BC).

Officials also tracked the mobility of people since the pandemic began in early February. Decreases can be seen in transit use, retail and recreation, and workplace activity.

Naturally, there’s been a large jump in visiting parks, which Henry says is “an important part of our strategy.

Henry stresses that BC’s numbers are “far below what they could have been” and that the province is slowing in new diagnoses.

“The difference is because of the collective actions we’ve taken across the province,” she says.

In response to developing an immunity to the coronavirus, Henry says that there are two things that could happen. The first is the idea of herd immunity, which involves many people getting sick and surviving; the second is discovering a vaccine.

“A small proportion of the population has been infected. Getting immunity from infection is not optimal and will not happen,” she said.

The goal, rather, is to “control transmission and growth” while minimizing the “unintended consequences” of health measures.

Health officials also hinted that elective surgery could also make a return over the coming weeks, although it’s essential to strike a balance that still limits the number of daily cases.

“What we have done has made a difference,” says Henry.”We must hold the line.”

A dynamic model that projects what could happen should British Columbia lift restrictive measures too early. The lines represent the effect on critical care based on the number of measures lifted (Gov BC).

The province also revealed a dynamic model that projects what could happen if BC were to lift its restrictions too early.

Henry says that if we were to go back to “normal,” then BC would see a surge in critical care.

“We are not at a place yet where we can think about removing the restrictions,” she notes. “Now is not the end, it’s not even the beginning of the end.”