Henry said control measures that were implemented in mid-March, such as physical distancing, have helped bring down the number of new cases, despite other outbreaks, and clusters.

“Most cases are being linked to community spread,” notes Henry. “That’s what we’ll be watching in the coming weeks and months.”

Although new patients continue to be admitted into intensive care units on a daily basis, the overall number of patients in critical care is slowly decreasing over time. Not to mention, additional adult-capable ventilators have since been received by the provincial government, with more expected in the near future, in the event of a surge. 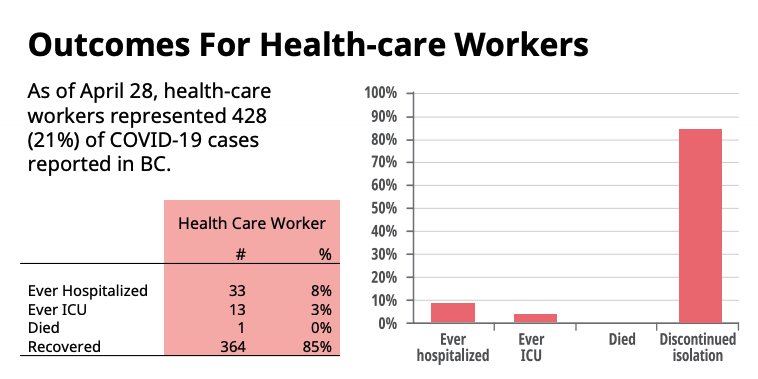 Comparing case rates to the rest of Canada and other countries

Cumulative diagnosed COVID-19 case rates against BC and Canada. (Gov BC)

British Columbia’s newest case rate comparison shows that the number of cumulative diagnosed cases are drastically lower than the rest of Canada. Quebec and Ontario have the greatest impact on the case and death rate for the rest of Canada.

“This is the result of the work that we’ve all been doing,” says Henry.

Comparatively, the province continues to track similarly to South Korea and Singapore. 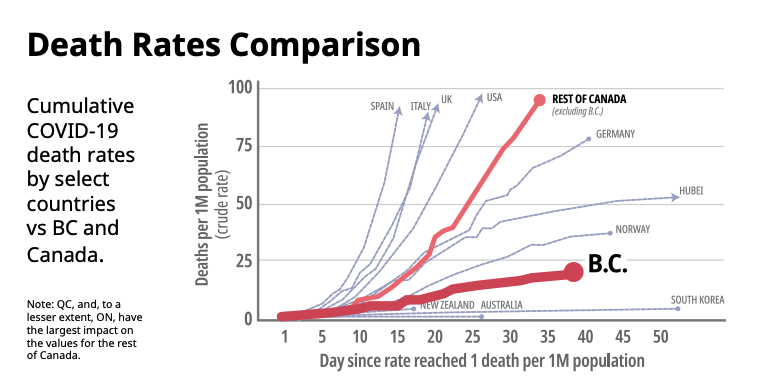 Cumulative diagnosed COVID-19 death rates against BC and Canada. (Gov BC)

Dynamic modelling and what could happen if restrictions are lifted

Health officials also revisited the dynamic modelling that was introduced last month and provided a further explanation as to what could happen if restrictions were lifted.

Henry says that “we are at the point where we’ve deflected the curve” and are “coming down nicely.”

Dynamic Compartmental Modelling where the dark pink line is what has happened over the past few months. The white dots represent the actual case numbers per day. (Gov BC)

Compartmental modelling is used to show “what would happen should we remove these restrictions too soon, too quickly, or too much.”

Different scenarios projecting the results of varying degrees of relaxed distancing. The left graphs represent 40% of our “normal,” the middle graph represents 60%, and the right graph represents 80%. (Gov BC)

At this point in time, social and physical interaction is at approximately 30% of normal, Henry said.

If British Columbians increased that amount to 40%, new cases and hospitalizations would remain low over the coming weeks and months.

Henry added that even if the number of contacts was doubled, increasing from 30% to 60%, the possible increase in numbers of cases and hospitalizations would still be manageable.

A red flag would be if the province returned to 80% of normal, such as last December. The increased number of gatherings and meetings would equate to high transmission and the possibility for an exponential surge.

The hierarchy of controls for reducing coronavirus transmission. (Gov BC)

Officials also discussed what they call the “hierarchy of controls” for the coronavirus, which shows the most effective measures for reducing virus transmission.

As expected, the most effective measure is physical distancing. Distancing has allowed for us to “put the brakes on COVID-19,” although Henry stresses that “we haven’t stopped the car.”

Listed after is engineered controls, which refer to solutions like the physical barriers that can be found on TransLink buses or at grocery store checkouts.

Administrative controls include reducing the number of people allowed in a single vicinity or putting markers in a lineup to spread people out.

How British Columbia can move forward

Henry said in the coming weeks and months, a new challenge will be finding a healthy balance while restricting the transmission of coronavirus.

“Our challenge and our work together is to find that sweet spot,” she said. “Somewhere around increasing our contacts by at least half or twice as many as we have now, but without allowing those opportunities for the rapid and exponential growth of the virus.”

“That is what we’re basing our goals on going forward. We must find that right balance.”

Other challenges include meeting the physical and mental struggles that come with restricting physical and social interaction. There’s also the obstacle of rebuilding the economy while ensuring that people can safely return to work.

“We know that our mental health, our economic health, affects our overall health and our population as well,” Henry adds. “We need to rebuild our resilient economy and provide supports for people, so they can safely return to work,” she said.

“We need to do that now in a controlled way, a safe way, and a managed way.”

Henry added that BC appears to be starting a new phase when it comes to the pandemic.

“So this is I believe the end of our beginning of this pandemic,” she said. “We do not yet know what’s going to happen but we know that we have some room to increase our social connections, to increase our work, to increase our school and daycare and childcare. But as we start this new phase we need to keep those principles in mind. They are the playbook for us to follow.”

Henry and Dix will join Premier John Horgan for an update on the province’s next steps regarding the pandemic on Wednesday.