As many provinces across the country see a hike in minimum wages today, British Columbia is left in the shadows with the second lowest minimum wage, behind New Brunswick.

Alberta, Saskatchewan, Manitoba, Ontario and Newfoundland and Labrador all increased their minimum wage on October 1 with jumps between $0.25 and $1 per hour.

Our neighbour, Alberta, which changes the value of the minimum wage annually based on Average Weekly Earnings and the Consumer Price Index, increased their wage by $1 Thursday, moving from $10.20 an hour to $11.20. The province had the largest increase of the five.

Amidst calls to raise B.C.’s minimum wage to $15, echoed earlier this year by labour unions, Premier Christy Clark refused to make that large of a move, saying it would hurt small businesses and the provincial economy.

The wage was most recently increased on September 15 to $10.45 from $10.25. A new system was implemented this year in which the minimum wage will fluctuate based on the Consumer Price Index, much like the system used by many of Canada’s provinces. The new wage for each year will be announced in March and implemented on September 15.

This also affects B.C.’s wage for servers which moved from $9 an hour to $9.20 this month.

Meanwhile, B.C. has one of the highest costs of living in Canada with some of the most expensive real estate. A recent study found that the wage needed to live in Vancouver was $20.68 an hour. On top of that, data shows that B.C.’s median employment income did not rise, and in fact fell, between 2006 and 2012 compared with a Canada-wide growth of 3.5 per cent. The median employment income in Vancouver in 2006 was $31,703 and only $30,170 in 2012.

The minimum wage debate may contribute to the percentage increase disparity. Newfoundland and Labrador, with the biggest median income increase, saw its minimum wage increase by 53 per cent between 2006 and 2012. Saskatchewan’s grew by 32 per cent, Alberta’s by 39 per cent and Prince Edward Island’s by 40 per cent.

For about two weeks in September, B.C. had the fourth highest minimum wage in the country but is now left in the dust as today’s changes come into affect across much of the country. View the chart below to see how minimum wages have grown across the province in the last five years. 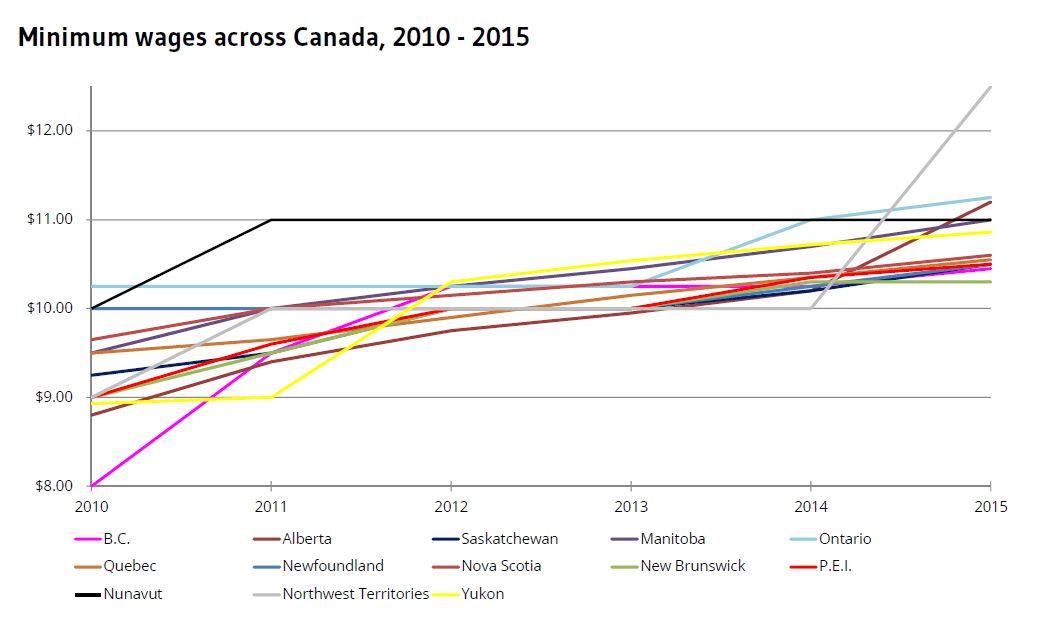