This is the first in a series of Bartender Profiles I’ll be sharing with Vancity Buzz readers in the coming months. Stay tuned for more!

Considered one of the most iconic bars in the city, the Gerard Lounge in The Sutton Place Hotel Vancouver has a very storied past. In 2014, the hotel’s ownership decided to introduce an exciting new dining concept and Boulevard Kitchen & Oyster Bar was born.

Nestled in the Southwest corner of what is now Boulevard, the Gerard Lounge has withstood the changing of the guard. As construction crews blasted out walls and created the new kitchen for Executive Chef Alex Chen and his team, bar legend Debra Holden was steadfast behind the stick of the indestructible Gerard bar. Debra remains there today, and is still slinging drinks at an amazing pace.

Holden began her career in Gerard in 1987 after a few stints as a cocktail waitress at the famed Sneaky Pete’s (now Brandi’s) and The World’s Fair during Expo ’86. Determined to become a bartender, Holden did whatever she could to get her foot in the door at Gerard — she was hired as a host, spent time in the front office of the hotel and waited on tables. With the encouragement of then legendary barman Tommy Mitchell, Holden found her way behind the bar. Mitchell was Holden’s teacher, and soon enough she was winning cocktail competitions and turning heads with her lightning speed.

Holden’s winning libation from the Plymouth Gin Competition in the early 90s won her local acclaim, and every now and again still gets a request. Titled the ‘Ginseng Martini’ (a twist on a Tom Collins), Holden’s creation is laced with a heavy hand of gin, apricot brandy, fresh citrus and soda, and noticeably, doesn’t contain any ginseng. “Well, ginseng makes you feel good,” says Holden. I can’t argue with that.

Holden is revamping her feel-good libation for this summer’s cocktail list at Boulevard, and I have a feeling it’ll contain an extra ingredient!

I sat down with Holden to learn more about why this tiny bar just off the beaten path of Granville and Robson Streets had such a draw. “It came down to the dollar,” says Holden.

In the 1990s, the strength of the American dollar transformed Vancouver into “Hollywood North” and at that time, The Sutton Place was one of the only hotels that had a residential component. Filmmakers, actors and crews would stay for months at a time during production, and Gerard became the after work hangout.

Holden recalls one evening when Sean Penn and Robert De Niro strolled in and sat at her bar. Penn ordered a vodka tonic, and De Niro, a margarita. Holden asked De Niro, “How’s your margarita?” He leaned in, raised his glass and proclaimed, “It’s better than Mexico!”

With all of the celebrity activity, and a reputation for top-notch cocktails, locals began to take notice. Gerard became the daytime hotspot for Vancouver’s high-rolling brokers and bankers of the time. Holden tells me that through the hazy fog of cigar smoke, major business deals were signed and sealed by the financial crowd during the day, and dog eared, wine-stained movie scripts were debated and memorized by Hollywood elites at night.

With the decline of the American dollar, and of the local film industry, Gerard grew sleepy but never faded away. Now with the reinvigorated dining scene at The Sutton Place, and the dollar disparity growing, Holden is seeing it happen all over again. You can still find her, and a whole new team of cocktail slingers, behind the Gerard bar. Next time you visit come and say hello, sit back and watch it all unfold. You never know who might be sitting beside you.

Below, Holden shares the recipe for her ‘Think Tropical’ cocktail — a huge hit during the rainy winter days of the 1990s in Vancouver, and a staple on her cocktail menu for five years. 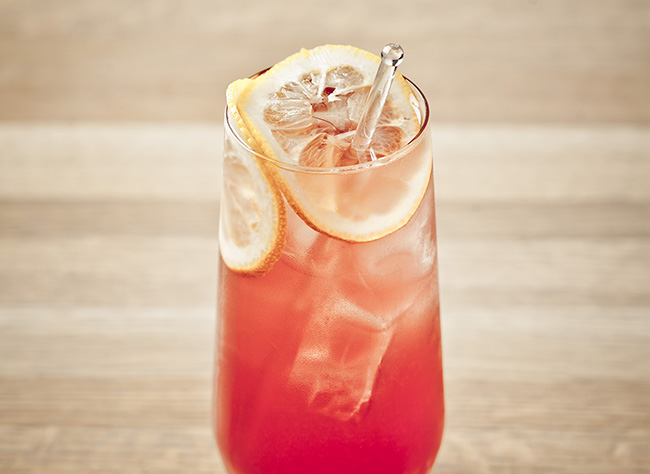