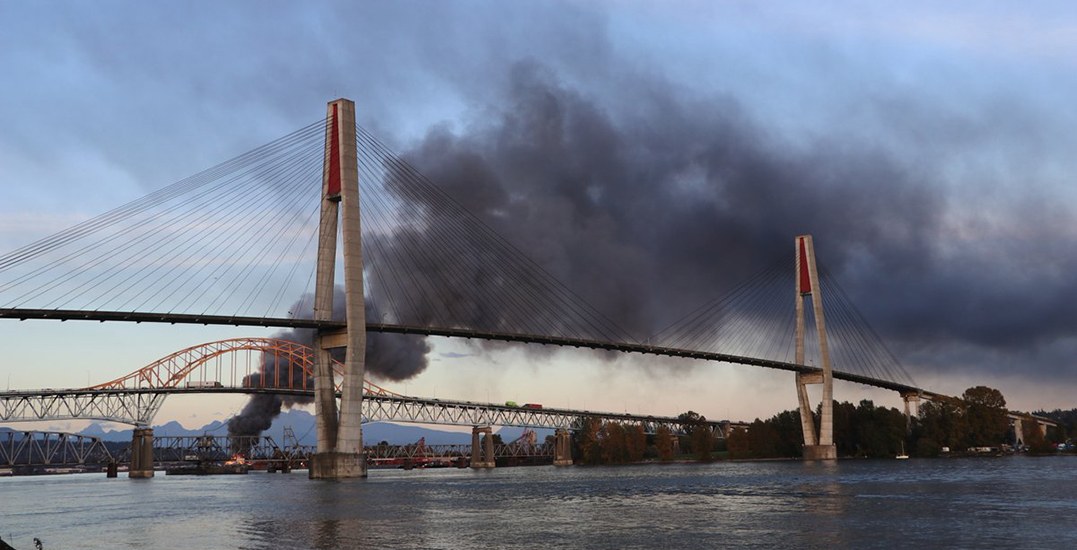 From yesterday evening to early this morning, fire crews from both Vancouver and Surrey were battling a barge fire that took place on the Fraser River.

According to Johnathan Gormick of Vancouver Fire & Rescue Services (VFRS), the flames were first reported around 5:15 pm by the Vancouver Fraser Port Authority.

The VFRS sent a fireboat and a battalion chief to assist teams from Surrey.

They found the blaze at the north arm of the Fraser River, where a thick black smog looked to be erupting near the Pattullo Bridge.

Barge fire near #NewWest. A phone camera from this distance just doesn’t show the size on those flames. pic.twitter.com/RefxQpG4xc

Hmm… that’s not good! Surrey seems to get entirely too many barge fires! ⛴🔥 pic.twitter.com/JBnLuxB609

Crews continued to battle the fire throughout the night, only making a brief change in teams at around 1 am.

By 6 am this morning, the flames had been extinguished.

Gormick was unable to comment on the cause of the fire but explains that the barge consisted of scrap materials waiting to be recycled.

Danielle Jang of the Vancouver Fraser Port Authority explained that Schnitzer Steel would be responsible for conducting an investigation into the cause of the fire.

The metal recycling company was also responsible for a similar barge fire that took place two months ago.