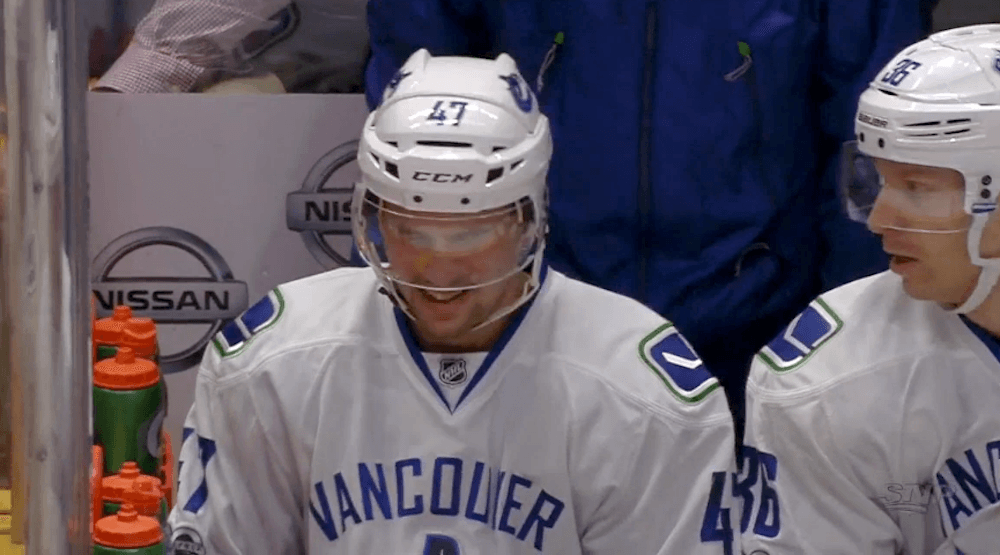 No, there won’t be a suspension coming to Cody McLeod of the Nashville Predators.

No supplemental discipline for Cody McLeod regarding Sven Baertschi hit from last night which was deemed accidental collision, FYI

McLeod was the subject of a bit of controversy on Tuesday night, after a hit on the Canucks’ Sven Baertschi. The play happened 1:53 into the game against the Predators, and looked incidental at first glance.

Baertschi returned for another shift, before leaving the game with a concussion.

Baertschi will not return tonight because of a concussion.

There’s a lot to unpack with this entire incident.

Second, how refreshing is it that the team announced the injury to a player. They didn’t say “upper body” or “concussion-like symptoms.” Too often, NHL teams try to be so secretive, when in fact, they’re fooling nobody. If a player gets hit in the head and leaves the game, we know it’s not because of a stiff neck. It’s refreshing to see the team call it what it is, a concussion.

Third, is this worthy of a suspension?

I’ll admit, the first time I saw this, I thought it looked incidental.

Here’s how the play set-up, moments before the hit (McLeod is in the yellow jersey at the top of the image): 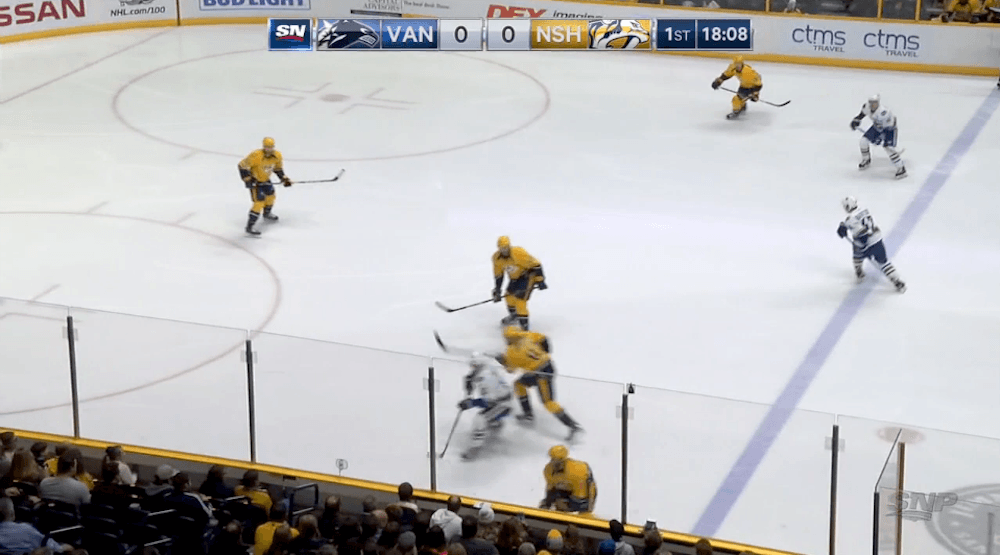 McLeod sees Bo Horvat turn the puck over just inside the blue line. He’s trying to get up ice and wants to get inside position so that he can get open for a pass. He is not stalking Baertschi from afar.

Now, McLeod is no angel. He’s sixth in the NHL in penalty minutes, right behind Matt Martin of the Toronto Maple Leafs. He averages just 7:55 of ice time per game with Nashville, and played just 4:35 against Vancouver. But if we begin to blame a player because of reputation, we get into fuzzy logic. Let’s judge him on his action.

This is the still, right before McLeod (middle) hits Baertschi (right) that proves this wasn’t as incidental as some may believe. 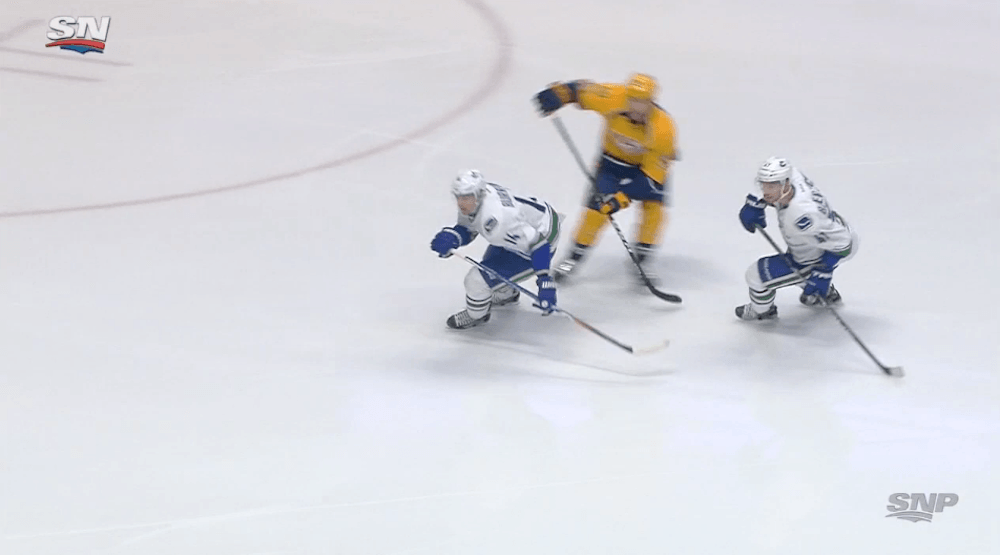 McLeod, despite being a fourth line grinder, knows how to skate. He’s prepping for a collision with Baertschi, who isn’t looking. That’s the way McLeod’s positioning stays until… 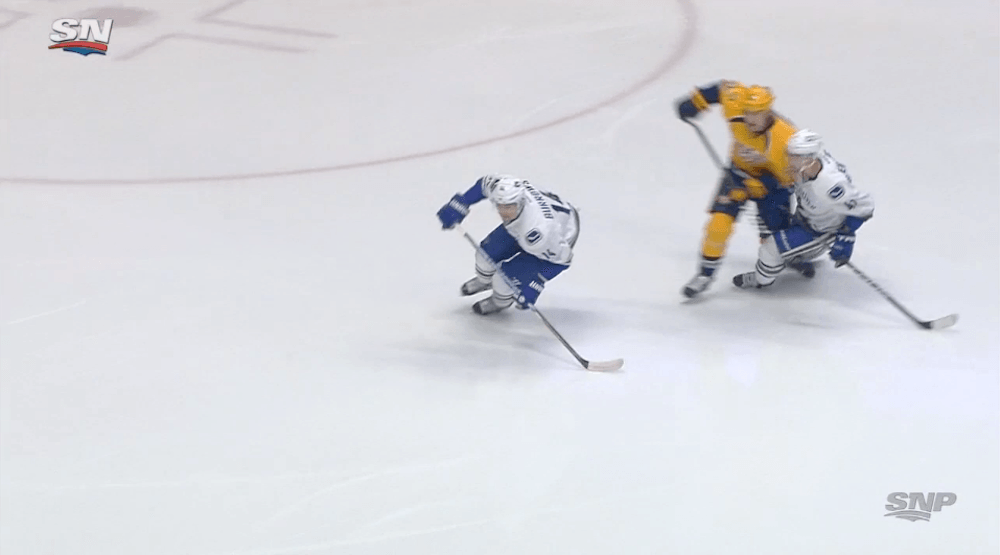 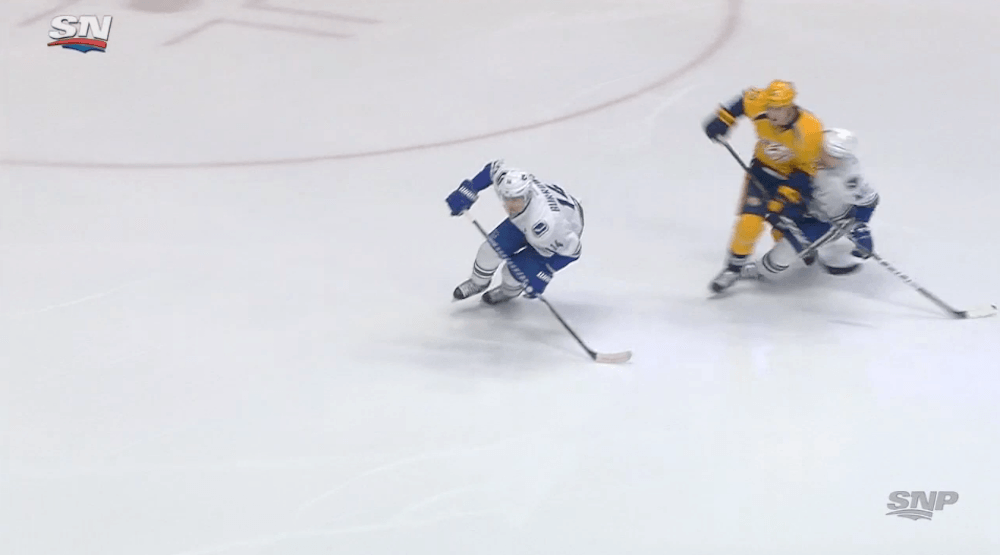 I don’t think that McLeod went out to purposely injure Baertschi, but I do think this was a bit of ‘accidentally on purpose’. He knows Baertschi is coming, and not only does he not try to avoid him, he dips his shoulder into his head.

Does he swing his arms violently? No. But he hits Baertschi’s head with enough force to cause a concussion, so this wasn’t a love tap.

So back to the question, should this have resulted in a suspension? The answer: it depends what day it is.

The problem the NHL has with the way they suspend players is consistency and messaging. Nobody knows the standard for a borderline hit like this.

If we look at the cold, hard facts, McLeod hits an unsuspecting player with his shoulder in the head. If he can see him coming and digs in, it’s a suspension.

You be the judge.

For now, it’s uncertain how long Baertschi will be out of the lineup for. If it’s long term, it’s a huge blow to the Canucks’ chances of making the playoffs.

“To see Sven go down is not fun,” Henrik Sedin told the Canucks reporter at practice on Wednesday. “He’s made big strides for our team this season and has turned into a very good NHL player.”

Baertschi has come into his own since being a healthy scratch back on December 11, scoring 16 points, including a team-high nine goals, in 24 games since. He’s fourth on the team in scoring with 27 points (13-14-27) in 50 games. He’s also Horvat’s right-hand man, and plays the point on the first unit power play.

In Baertschi’s place it looks like the Canucks will play Jannik Hansen, who just returned from injury, on Horvat’s line.

The Canucks play the next game of their road trip on Thursday in Columbus.