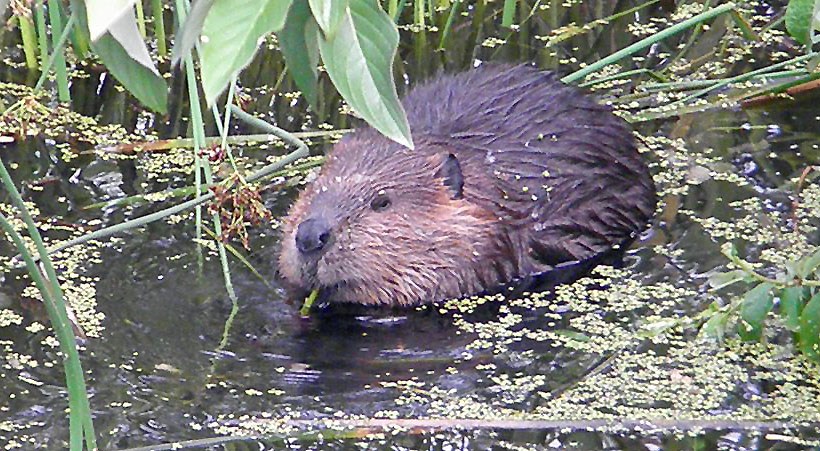 One of the beavers in Olympic Village (OlympicVillageBeaver/Twitter)

Vancouver’s Olympic Village beavers get cuter every day it seems – especially if their latest baby beaver Instagram video is anything to go by.

The baby beaver, also known as a kit, just can’t resist showing off his swimming skills for the camera.

Baby. Beaver. Need I say more? 😍 (P.S. That high-pitched shrieking noise is either that of a seagull or a man repeatedly falling forward off his bicycle seat.)

A video posted by Olympic Village Beaver (@olympicvillagebeaver) on Jul 26, 2016 at 8:43pm PDT

The baby beaver looks right at home in Olympic Village, where he may or not have at least two siblings, depending on who you ask.

3 pups – all healthy! Mrs. Beaver and I are so happy. But exhausted. Can anyone beaver-sit this weekend? @ParkBoard https://t.co/6OR6iqbeHX

But Nick Page, biologist with the Vancouver Park Board, told Daily Hive the kit – and any brothers or sisters – will eventually have to move on.

“The beavers we have in Olympic Village came to that site about a year ago,” said Page.

“We suspect they also spend time in Charleston Park. Neither of these habitats are big enough for beavers in the long term.”

Page speculates the little beaver was born in April or May. When he reaches a year old, Page says, his parents will have another litter – and he’ll be kicked out.

“They’re limited by food, running out of food supplies and end up having to move on,” said Page. “The baby beaver will have to find somewhere else to live that’s suitable.”

Lucky to be in #OlympicVillage and having a quiet Saturday morning pic.twitter.com/t414eASvg7

Page said there are multiple beaver habitats in Vancouver, but they already have their own beaver residents.

The little beaver may have to look further afield and put his swimming skills to good use in the ocean, says Page.

Page says the park board isn’t planning on creating any new parks or wetlands suitable for beavers in the near future.

But, he says, the board is working hard to adapt to Vancouver’s resident beavers and sees the value in having the critters around.

Selecting the perfect branch is the same process as squeezing each and every avocado at the grocery store. 🌿🌿🌿 #sophieschoice

A video posted by Olympic Village Beaver (@olympicvillagebeaver) on Jul 21, 2016 at 9:15pm PDT

Page says the biodiversity the beavers add the urban environment is a good thing and calls them “ecosystem engineers.”

“They have created some maintenance issues, they tend to chew down trees,” said Page.

“But they store water well, they like to keep water levels high, which is good for other aquatic species and during drought.

“The damage they do to trees creates dead trees which are good for woodpeckers too.”

In the end, says Page, the Olympic Village beavers are just reclaiming what is rightfully theirs.

Thinking about installing a sky light. 🔧🔨⚒

A photo posted by Olympic Village Beaver (@olympicvillagebeaver) on Jun 6, 2016 at 7:18pm PDT

By the end of fur trading in Canada, he says, beavers were hunted and trapped from their historical population of 3 million down to just 100,000.

And in Vancouver, it’s only in recent years that the beavers have returned.

Of course, it helps that they’re cute as hell.

“Generally a lot of park users are captivated by the beavers and you can see the value of urban wildlife in the city every day.”

Was just asked if I’m a platypus. I just swam away in silent protest. pic.twitter.com/Vtm5W5d8Gw