It’s been another month of price increases across the Canadian rental market in October.

In comparing 25 Canadian cities, 15 experienced increasing prices, 7 decreased, and 3 remained unchanged, according to the latest report by PadMapper.

The top five cities in the rental market remained stable over the past month, but some new contenders are climbing up the price ladder.

And like the past several months, Vancouver and Toronto dominate the top two positions as the most expensive rental markets in Canada.
As the most expensive rental city in the country, Vancouver’s median for a one-bedroom is up 5% this month, and now costs $2,120 to rent. A two bedroom in Vancouver also went up over the past month, and is now at $3,200 compared to last month’s $3,160. 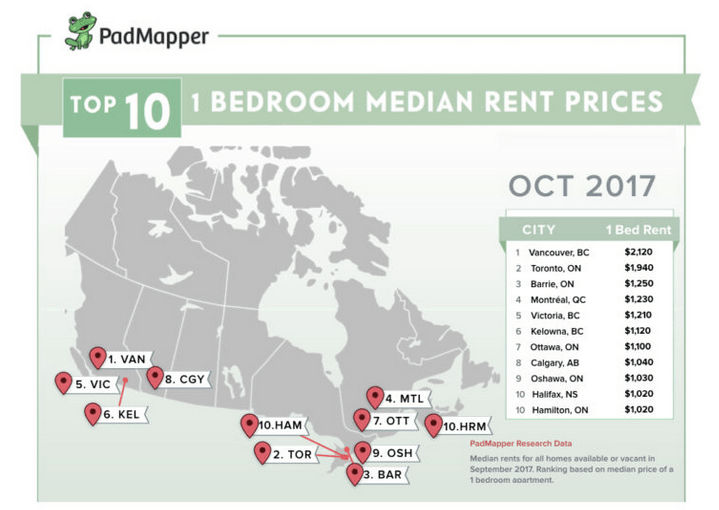 Remaining in third place is Barrie, which continues to see rent climb over the past  year. One and two bedrooms have settled this month with medians of $1,250 and $1,520 respectively, in the Ontario city.

Montreal continues to hold its fourth place position. Rent in the Quebec city has experienced a 3.4% hike to $1,230 for one-bedrooms, with two bedrooms now renting at $1,570.

Back to the west coast, where Victoria remains in fifth place and has the fastest growing one bedroom rental in the country, prices climbed 5.2% over the past month with its median sitting at $1,210, and two bedrooms growing slightly higher than last month to $1,560.

New to the top 10 this month are Halifax and Hamilton, which both saw increases in their one and two bedrooms, having them tied as the 10th most expensive cities.

Calgary saw a slight increase overall, and bumped up one spot to 8th with its $1,040 a month cost for a one bedroom.

The cheapest city to rent on the list is now Windsor, Ontario, which has a price tag of $640 for a one-bedroom, and $890 for a two bedroom (AKA the price of a shoe closet in Vancouver). 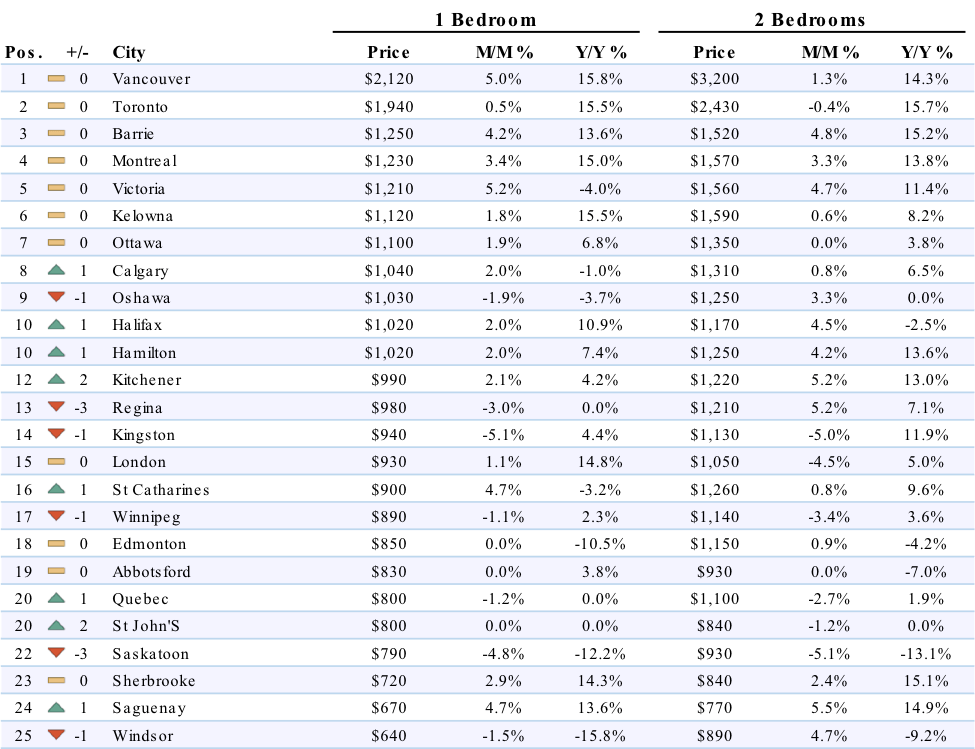