As we’re in winter’s last official month, there doesn’t seem to be an end in sight for the high cost of rent in Canada’s largest cities.

Overall, eight cities across the country experienced a rise in rental costs, ten went downwards, and six remained idle, according to the latest report from PadMapper.

“Similar to last month, half of the total cities had double-digit, year-over-year rental growth rates,” notes PadMapper. “The market seems to be staying strong as we get into the hot moving season.” 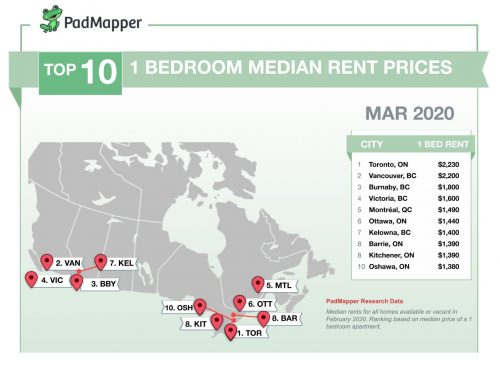 Once again, Toronto took the top spot for the most expensive rent in the country. One bedrooms bumped up to $2,230 and two-bedroom spots decreased by -3.7% to $2,870.

Vancouver remained in second place with one bedrooms increasing to $2,200. Two bedrooms remained flat at $2,990.

Burnaby, BC, remained in third place with rent increasing to $1,800 and two bedrooms remaining at $2,350.

Montreal locked into the five-hole, with single-bedrooms going for $1,490 and two-bedrooms at $1,850.

The cheapest rent in Canada this month can be found in St. John’s, Newfoundland, where one-bedroom rent costs $810 and a two-bedroom goes for an average of $880. 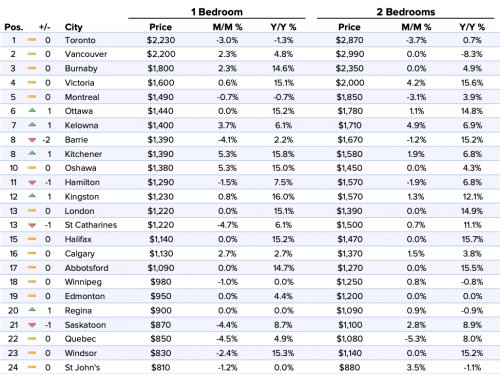