Avalanche Canada has heightened the risk for avalanches on the North Shore mountains, including a “high” risk below the treeline.

Due to heavy snow occurring on the North Shore mountains, including 88cm in the last seven days on Grouse Mountain, Avalanche Canada has issued a warning that one or more small to large avalanches are “likely or very likely” to occur.

“Avoid all avalanche terrain during periods of heavy loading from new snow and wind. Avoid exposure to terrain traps like gulleys and creek bottoms where the consequences of an avalanche will be the most serious. Stick to simple terrain and be aware of what is above you at all times,” warned Avalanche Canada.

According to the snow authority, a natural avalanche cycle was observed on Saturday night with a 50cm deep crown, as well as another avalanche on Sunday due to skiing and boarding activity.

The unique snow conditions are to blame for the higher-than-normal risk.

“Fifty to 80cm snow from Saturday night/Sunday formed storm slabs which bonded very poorly, with widespread failure on a storm interface about 50 cm down. I expect wind slabs have formed at ridge top as well. Below the recent storm snow, the lower snowpack is reported to be well settled. With continuing cold temperatures and ongoing loading, storm snow instabilities may not heal as quickly as North Shore locals are used to,” the warning continued.

The warning was issued on Sunday evening and continues until 10 p.m. Monday, with another warning likely for Tuesday.

North Shore Rescue is equipped to handle avalanche rescues on the local mountains, but warns skiers, boarders and other alpine users they should enter both the front and back-country prepared. 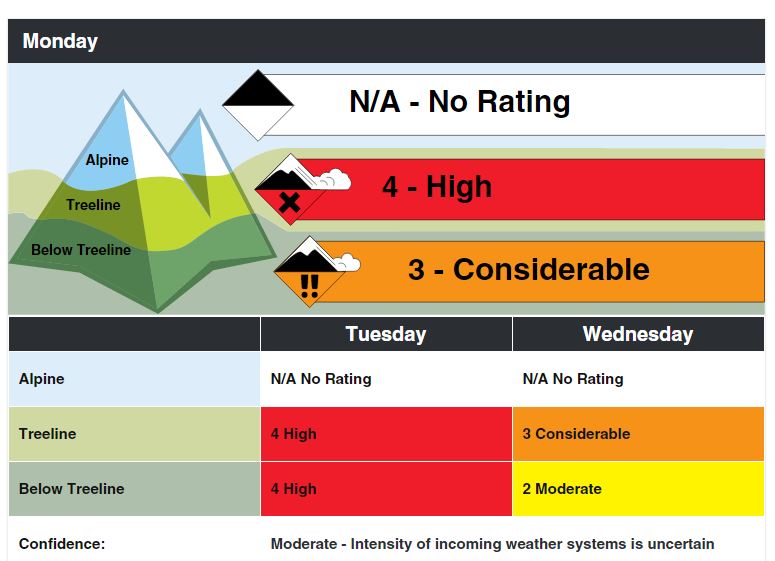