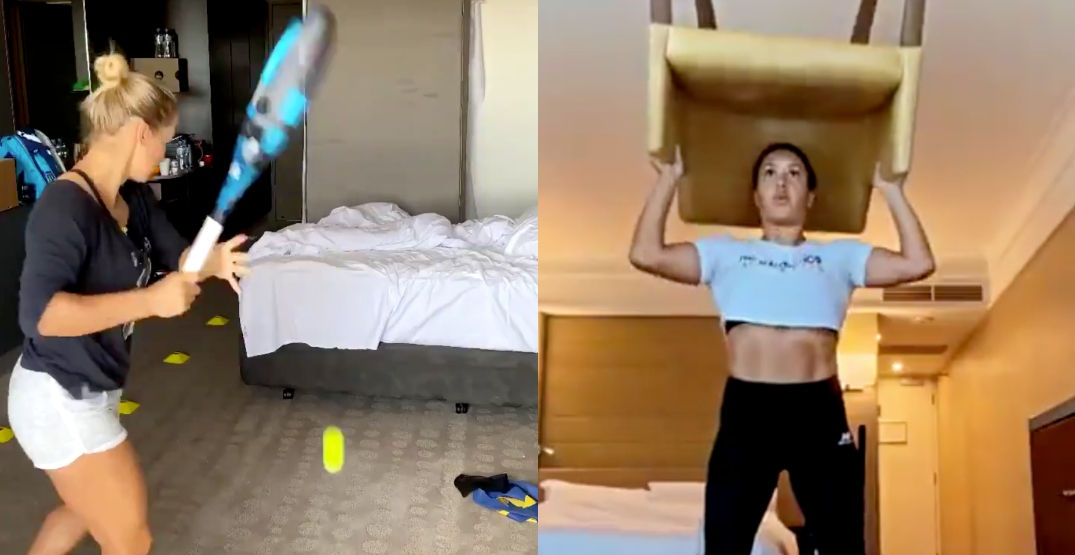 Australia’s strict quarantine rules have incoming tennis players trying to find new and creative ways to stay sharp ahead of the first Grand Slam of 2021.

Usually played in January, the main draw of the Australian Open has been pushed back to February 8 this year. But players needed to arrive in the country well ahead of time. They’re required to quarantine for 14 days upon arrival, with special access to a practice court for up to five hours a day.

But the rules change if someone tests positive on your flight into the country.

A total of 72 players were on board one of three charter flights into Melbourne over the weekend that had at least one person on board test positive for COVID-19.

Among the people who tested positive was Bianca Andreescu’s coach, Sylvain Bruneau.

While none of the players on board tested positive, all 72 of them were forced into a quarantine hotel, and aren’t allowed to leave their rooms for 14 days.

The world's best tennis players are arriving, ready to fight for the first Grand Slam title of 2021. Before the battle can begin they must quarantine for 14 days, take daily COVID-19 tests, physically distance, and practice & train under strictly controlled COVIDSafe conditions. pic.twitter.com/XrJDmc9vCi

Australia has had remarkable success combating the pandemic with strict quarantine rules for incoming travellers, and ultra-restrictive lockdowns to stop the spread of the virus. A country with over 25 million people, Australia reported just eleven new cases of COVID-19 Tuesday.

Fans will be allowed to attend matches, with tournament organizers hoping it can reach at least 50% of last year’s attendance.

But until then, 72 bored-out-their-mind tennis players will need to find a way to stay active for the next two weeks.

For these finely-tuned athletes who are used to spending up to five hours a day on the tennis court, it’s a huge inconvenience.

Players have been posting videos to social media showing off their unique preparations.

Many players are hitting tennis balls against mattresses turned on their sides. In the case of 12th-ranked Belinda Bencic of Switzerland, she’s practising by hitting a ball against her double-pane window.

It’s desperation for players, but also highly-hilarious, at least for those of us watching from afar.

Wrong surface but that doesn‘t matter for us💪🏽 pic.twitter.com/R8FsdyGafy

Day 5/14 – squat press with a leather chair (& bangers on in the background 🎶) pic.twitter.com/YwrKGJyV2c

Who said that players aren’t able to do practice? 🎾

One way to do my quarantine workout in my hotel room…
.
Trening podczas kwarantanny w pokoju hotelowym? Można i tak.#AusOpen pic.twitter.com/1OiItCwTnB

Day 5 of isolation. Making some adjustments to training but still getting some work done 🙂 #AusOpen2021 pic.twitter.com/5x0vZ4SnT6