A former Vancouverite is making international headlines while making a difference halfway around the world, and he’s doing it one haircut at a time.

Nasir Sobhani, 26, first began his life-long love affair with hair cutting on the streets of Vancouver, after moving to the city from his home country of Japan. Having always cut hair for his friends, Sobhani says it wasn’t until he was getting ready to make the move to Australia that he realized he wanted to do it for a living. From then on, it was all he could think about.

“When I arrived in Melbourne I was hungry for any experience I could get my hands on,” Sobhani tells Vancity Buzz. “My brother put me in touch with an amazing girl named Summer, who owned a barbershop called Electric Brain in Fitzroy. She took me in and showed me what I needed to learn.”

About a year ago, while working at the shop, Sobhani saw a heroin addict that employed himself washing windows in the area. Chatting with the man while he went about his work, Sobhani learned that the man had been clean for a month. 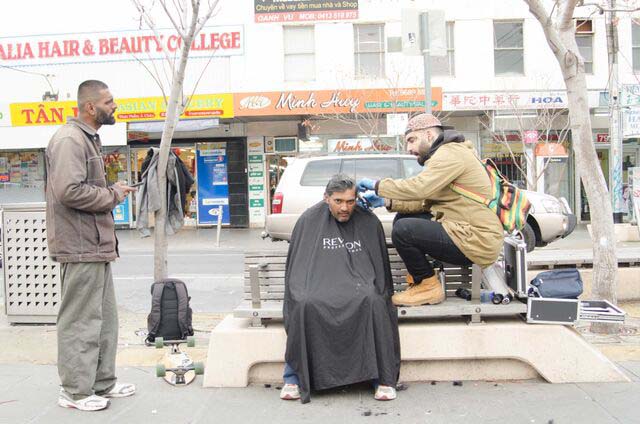 “I couldn’t believe it! He wanted to get a haircut. His hair was very long and he had dirty dreadlocks in the back. Overall he just needed a complete makeover,” he says. “I asked him to let me cut his hair, so we sat down together and we shared stories about our past.”

The seemingly simple act had a larger impact on the man’s life, and his own, than he could have imagined.

“After I was done he loved the way he looked, and his mom even came in and was taking photos. She was in tears. It was a very monumental moment in my life. It was at this point that I realized that if I could help encourage this change for a guy, and all I’m doing is just what I love doing, then maybe I should keep doing it.”

From there, Sobhani began approaching people on the street, offering a handful of free haircuts a day. He said reception was initially hesitant, but eventually people warmed to the idea.

“They don’t really get what’s going on or why a random person would come up and offer something like a haircut. But once we start talking, they generally open up and accept my offer and we take it from there. Now that I have been doing it for almost a year I’ve seen a few people multiple times, and we’ve built connections that grow like any other connection you’d build with a person.”

Sobhani goes out one day a week – his only day off – and tries to give four or five haircuts each time. With the Australian winter night getting longer, he’s doing what he can to keep at it.

“I sometimes have to continue cutting when it’s dark with street lights and people holding up their phones to give me some light as close to street lamps as possible,” he says. 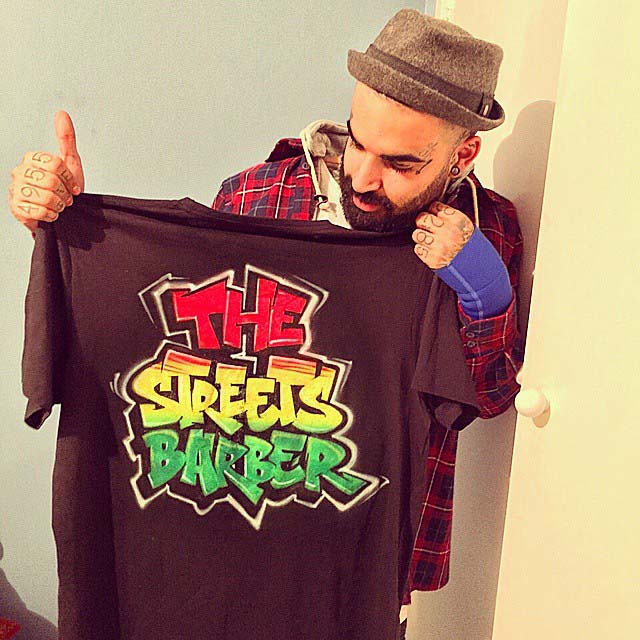 Each time he goes out brings another experience that changes his perception, or shows him something new about the people he’s helping. He recalls a specific incident, while cutting the hair of an older Australian man one day.

“While I was cutting his hair, different groups of people came up and asked for haircuts. There were a bunch of Sudanese refugees, some Vietnamese guys and some Australian guys, and they all kept to themselves while they were waiting. I noticed that after they had, one-by-one, received a haircut they slowly started talking to each other. You could see how they felt so much better after getting a haircut that their distance, and lack of motivation to engage with one another dropped. Instead their comfort, openness and willingness to communicate and connect with each other grew, and they basically became homies. It’s amazing to see what an effect a small effort to reach out to someone can have.”

Sobhani hopes that, in part, his work will help to remove some of the stigma surrounding drug addicts and the homeless. He says that no one can truly know what leads someone that path, and that too many misconceptions exist in regards to the people often forgotten and ignored by society.

“Not all homeless people are drug addicts and not all drug addicts are homeless. No one enjoys being on the streets, or being a drug addict. No one chooses that kind of lifestyle because they want to live that way.”

Sobhani knows this first hand. Before moving to Australia, he struggled with his own drug addiction, spending several months in rehab. The love and support he received from his family is part of what gave him the strength to get clean, and he hopes that what he’s doing can show his “customers” the same thing. 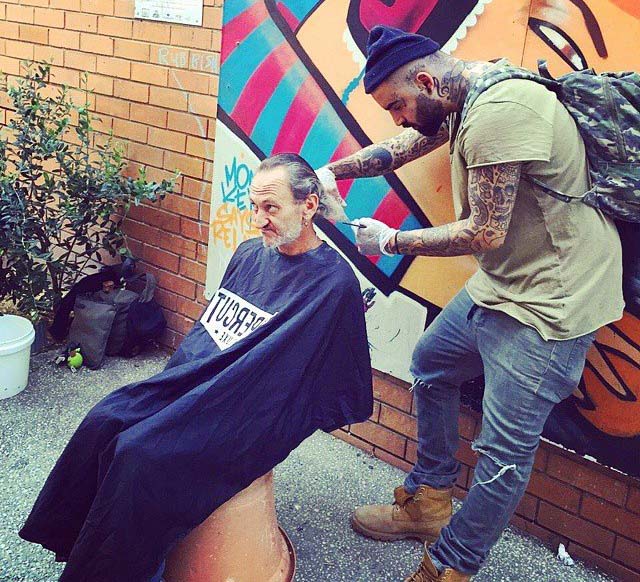 “I was going through the worst times of my life, and my parents continually showed me that they love me, same with my brothers. It was the only thing that motivated me to become better. I want to give everyone I meet the same opportunity, to see that they are worthy of being loved, and that someone loves them when they don’t love themselves. As much as everyone enjoys to receive love, I think all of us actually want to give love to others. So it’s not like I am doing them a favor. They allow me to do what I love doing. They are doing me a favor just as much as I am helping them. So it works out for both sides. It’s about empathy, not sympathy.”

After almost of year of cutting hair, and relationship after relationship being formed, Sobhani hopes more than anything to continue with his work.

“The most important thing for me is to just keep going as I have, and hit the streets as much as I can, and build those connections with people. If likeminded people arise to do the same – serve people, not just cut hair for homeless people, but whatever they can offer in their own capacity – it will bring so much joy to my heart. At the end of the day I just hope that my service is benefitting others the way it benefits me.”

Sobhani’s Baha’i faith plays a definite role, and a particular saying exemplifies how giving back makes him feel. “To make a sacrifice is to receive a gift.”

I had the honor to be on one of Melbourne’s main radio station talking about the #cleancutcleanstart program for the morning show with Matt Tiley and Jane Hall. The segment is available on the link below. I will also link it in the bio section to make it easier to access. Thanks guys for all the support and inspiring me to keep this project going strong. The link is : http://www.kiis1011.com.au/shows/matt-jane/nasir-sobhani-is-the-streets-barber #cleancutcleanstart #thestreetsbarberproject #thestreetsbarber

“If you cannot feel deeply, be it joy or agony of soul, you are not much of a human being, for to feel is the very hallmark of living matter. And if, when life is hard, or suddenly deals you a bitter blow, you can not stand in the fire and burn, eat your portion of pain, enduring it rather than escaping it, you are not only a weakling, you are missing one of the finest things life has to offer” – Bahai writings #cleancutcleanstart #thestreetsbarberproject #thesteetsbarber photo cred – @noahthommo

“The paradox of our time in history is that we have taller buildings, but shorter tempers; wider freeways, but narrower viewpoints. We spend more, but have less; we buy more, but enjoy it less. We have bigger houses and smaller families; more conveniences, but less time; We have more degrees, but less sense; more knowledge, but less judgment; more experts, but more problems; more medicine, but less well being. We laugh too little, get too angry too quickly. We watch TV too much, and pray too seldom. We have multiplied our possessions, but reduced our values. We talk too much, love too seldom, and hate too often. We’ve learned how to make a living, but not a life; we’ve added years to life, not life to years. We’ve been all the way to the moon and back, but have trouble crossing the street to meet the new neighbor. We’ve conquered outer space, but not inner space. We’ve done larger things, but not better things. We’ve cleaned up the air, but polluted the soul. We’ve split the atom, but not our prejudice.We write more, but learn less. We plan more, but accomplish less. We’ve learned to rush, but not to wait. We build more computers to hold more information to produce more copies than ever, but have less communication. These are the times of fast foods and slow digestion; tall men, and short character; steep profits, and shallow relationships. These are the times of world peace, but domestic warfare; more leisure, but less fun; more kinds of food, but less nutrition. These are days of two incomes, but more divorce; of fancier houses, but broken homes.It is a time when there is much in the show window and nothing in the stockroom; a time when technology can bring this letter to you, as time when you can choose either to share this insight, a time when you can choose to make a difference” – George Carlin #cleancutcleanstart #thestreetsbarber