Tonight at the Killjoy basement club in Yaletown, another member of the A$AP Mob invades Vancouver as A$AP Nast takes the stage at #UNDERKILL Thursdays.

Much like the A$AP Twelvy show last month, this one will be at capacity quickly (those who were there know what we’re talking about), so arrive early to ensure entry or hit Ticketzone.com, DIPT, Beatstreet, or Zulu for advance tickets. Limited tickets will be available at the door. 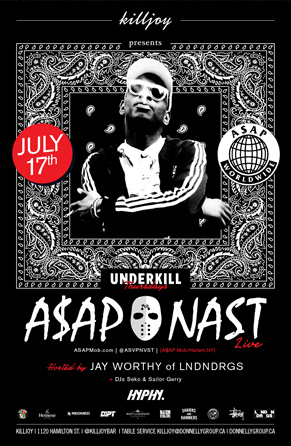 From: “I rep all of Harlem, but I’m from Morningside, so I’ll rep that until the death of me. I’m from 115th and Morningside Avenue.”

How He Met A$AP Rocky: “Rocky is my cousin. That’s the fam. We were distant cousins for a while. We hung around when we were younger. Then after a while, he went his own way. He moved up to the BX and we parted ways. I knew where he was, but I was doing my own thing. Eventually, the whole A$AP thing started, and that reunited us. Then, Bari and them started f—ing with him. They started bringing him to the hood, and I was like, ‘Oh s—, my long-lost cousin.’ Next thing you know, we were back at it.”

Role In A$AP: “I’m the n—- that rapped and then didn’t want to rap anymore. I’m a role model to my brothers. I be making sure s— is good behind the scenes and on-camera.”

Before The Fame: “All I knew was selling weed, making a dollar and rocking the flyest s—. That’s it. It damn sure wasn’t school. I dropped out after age 18. I was just in the hood, making money and living life without giving a f—.”

Since The Fame: “They f—ed around and gave us the public eye. That’s the biggest thing, because if you don’t have the public eye on you, you ain’t nobody. Obviously, things have changed for me drastically. I was a n—- from the hood.”

On Fashion: “I think fashion is what brought us all together. We’re so close because we were all fly. We would all feed off of each other like, ‘Damn, this n—-‘s a fly n—-. I’ve got to get up on this and make sure I’m on my s—.’ So we all fed off each other with that s— and it made us monsters at the end of the day.”

What He’s Learned: “Everyone in the industry isn’t who you think they are when you’re outside of it. Some people we meet, ain’t going to say no names, but they’re a–holes. The people you look up to before you’re in the industry, when you’re just an unknown motherf—–, you think a bunch of people are just ‘it.’ Then, when you’re actually in there, you realize that these people ain’t s—, at all. I realized that the people that are actually doing s— are the ones with the closed mouths. The ones that aren’t doing s— are the ones with the biggest mouths.”

What’s Next: “You can expect a s—load from me. I’m working on my project, God Bless America. We’ve got this A$AP Mob s— in the works right now. So, right after that, I’m dropping my s—.”

Final Words: “Anybody can rock fashion these days, but it ain’t all about the clothes. It’s about the style. If you don’t have any style, f— your fashion.”