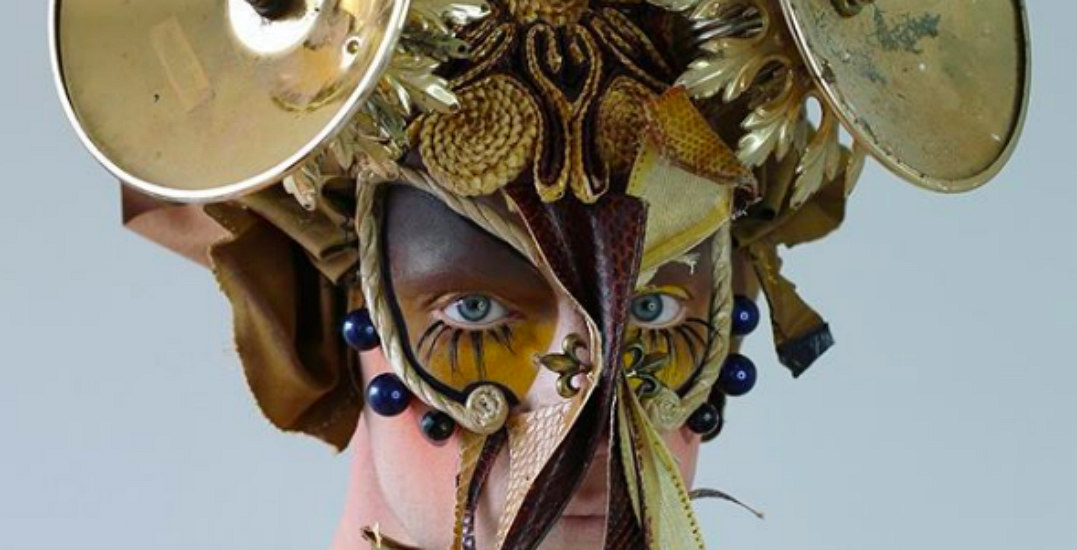 If there’s one thing we know about the fashion world, it’s that trends may come and go, but authentic designs always stand the test of time. When you see the work of an artist who creates original masterpieces, it’s the same.

Vancouver-based artist Lyle Reimer is taking the world by storm for exactly this reason. He’s the creative genius behind some of the world’s most expressive self-portraits made entirely from found or entirely recycled materials.

Reimer believes that acting on creative impulses really allows you to work from a space that evokes the truest form of art. His career is just getting started, and already, his work has impressed Gucci, Philip Treacy, as well as Viktor Horsting and Rolf Snoeren of Viktor & Rolf, who co-wrote the foreword of his first book, Lyle XOX: Head of Design.

The artist grew up in a small town in Saskatchewan with a population of fewer than 200 people; a totally different world than he currently lives in.

“It wasn’t easy growing up there,” Reimer tells Daily Hive. “You feel like an alien for most of your life. But I think that living in a place where there’s not much around for you to do forces you to think outside the box on a daily basis.”

Reimer is a firm believer of not letting your surroundings dictate what you can or can’t do. After living in Cuba for a year when he was 18, he was inspired to come back to Canada and figure out what was truly important in his life. This led him to look into makeup school.

Studying makeup artistry wasn’t always easy for Reimer. However, he remembers his first day and arriving at Blanche Macdonald feeling as though he was “coming home,” joining a community of similar thinkers and artists. During his time at the school, he “learned all the rules in order to break them.”

Today, he creates beautiful sculptural-based pieces from recycled garbage. “People from all over the world send me their curated boxes of garbage with little love notes and really want to be part of art,” he says.

How does he stay inspired to create totally unique self-portraits? The artist says it’s rooted in the items that are found. “I find the mundane objects of everyday life really fascinating, and they are a jumping-off point in terms of the whole overall look.”

When he’s working, he doesn’t know what he’s making or what it’s going to become. As he begins to create a look, Reimer starts by getting rid of his eyebrows and working with a blank, pale face. Then, his journey to becoming Lyle XOX is underway — and it can take hours to complete.

“I don’t map anything out, it’s all in the moment. I use the pieces that are around me and let them guide the whole creative process and journey.”

Reimer looks up to Brooklyn-based artist Wangechi Mutu, and recalls the first time he came across her work. “I don’t think I’ve ever been in a gallery where I literally dropped to the ground. There was no chair, so I sat down on the ground immediately and was completely taken aback by her work. She’s inspirational.”

Fast-forward to 2019 and Reimer has gallery representation of his own, with a solo exhibition launching in Vancouver in April 2020. He’s working on a multitude of different projects and recently completed a residency with Cirque du Soleil in their Montreal head office.

A dream of Reimer’s came true this year when he had the launch of his book at Bergdorf Goodman in New York and created displays for the store’s 5th Avenue windows. He designed pieces that were put onto the mannequins and worked with stylists to find the perfect fashion looks.

“It was like checking off a bucket list item in your life — I’ve dreamed of doing windows since I was young,” he adds.

The artist is excited to see how the work he is doing continues to evolve and transform into different mediums.

Stay with Lyle Reimer on his journey by following his work on Instagram.