In support of September being Canada’s Arthritis Awareness Month, Vancouver drag queen Tequila Mockingbird spoke to Vancity Buzz about her struggles with arthritis. The Arthritis Society, BC & Yukon Division, is shedding light on the fact that arthritis doesn’t discriminate.

After Vancouver Pride Week, it became clear that there was an absence in representation of the LGBTQ community in terms of dealing with arthritis.

The Society believes that each face of arthritis should be fairly represented. “Arthritis doesn’t discriminate, and neither do we,” said Executive Director Richard Mulcaster in a press release.

“The Arthritis Society is about community and inclusiveness. Ms. Mockingbird has been very gracious in lending her image to represent a very significant and important part of the population.”

The population Mulcaster refers to is the LGBTQ population, which Mockingbird has successfully represented in the “working to drag arthritis out of the closet” campaign.

The campaign depicts Mockingbird posing with captions that read the campaign’s slogan, which pushes forward the thought that arthritis has no boundaries when it comes to targeting people. Typically, arthritis is a disease associated with old age.

“I think people that have elderly people in their lives know that those people have arthritis because they usually make some reference to it. Also, over-the-counter medication commercials tend to target the elderly. And I don’t think that there’s a lot of awareness that young people can get it too,” said Mockingbird, who has become a visual representative for the Society.

Mockingbird has had arthritis for 13 years, and said she told her doctor she didn’t want to be diagnosed.

“I was trying out to be a police officer and I knew that would affect my chances. Finally I was so bad… that he told me that he had to diagnose it so that I could be treated.

The Arthritis Society’s Manager of Communications, Carrie Gadsby, has worked with Mockingbird for this campaign and says she’s grateful for her lending her image to spread awareness.

The Arthritis Society will be holding their annual Bluebird Gala on Friday, September 26 at The Boathouse Restaurant. 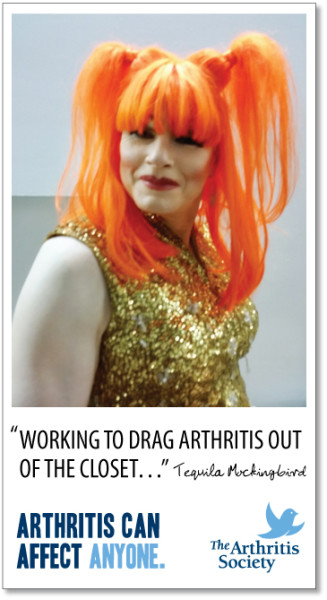 Tequila works on dragging arthritis out of the closet
Image: Carrie Gadsby