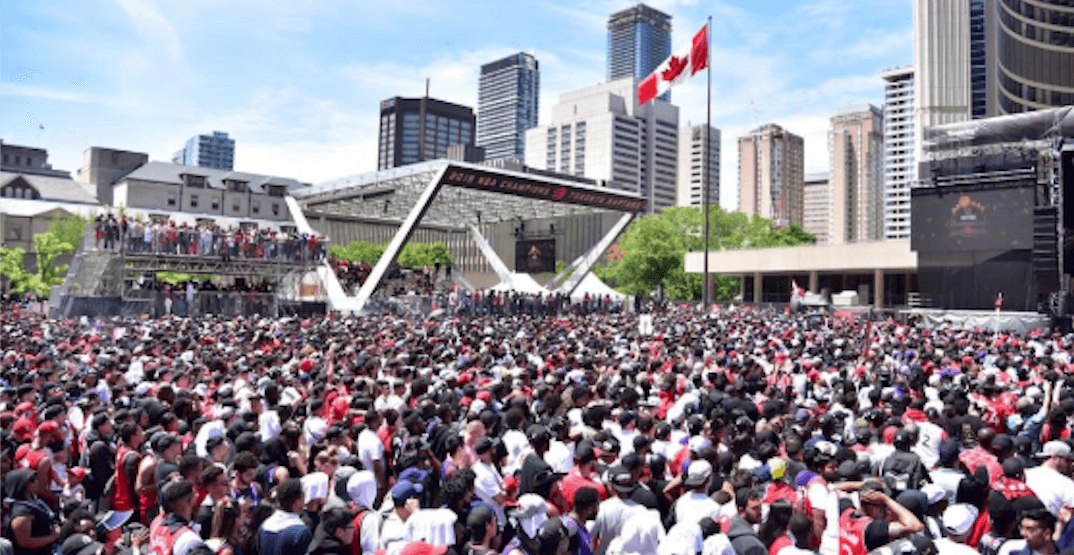 A shooting in the midst of the Raptors NBA championship celebrations at Nathan Phillips Square in downtown Toronto has left four people with injuries, according to police.

“Three people were arrested in total,” he confirmed. “Two on one incident and one on another.”

As for what police know about the suspects, Saunders said it’s “really early right now, and we’re trying to see what roles – if any – the people have that we apprehended in this case.”

The police chief also confirmed that two firearms had been retrieved from the scene, but he did not specify whether the shooting was targeted, or whether those injured were innocent victims.

Asked if there was a threat to overall public safety stemming from this incident, Saunders responded that “nothing seems to tell me that at this point in time.”

He added that “the apprehensions were done incredibly quickly after the incident itself.”

When it comes to police preparation for large-scale events such as this, Saunders said there is “a tremendous amount of work that is put in, in order to make sure that we keep our citizens safe. I can’t describe the amount of resources that you don’t see that are involved to get to where we are today.”

At this “very early stage” in the investigation, he furthered, “what we’re trying to decipher right now is who is who and what role did they play?”

As such, he continued, police are appealing for any witnesses, or any video footage of the incident from bystanders.

“I can tell you there were well over 100,000 cameras that were all rolling in 4k and 1080p quality,” he said. ” I need them right now to help answer those questions. Lots of people saw this – it didn’t happen in a vacuum.”

Saunders described the victims’ injuries as non-life-threatening, and credited the quick response of the medical teams for that fact.

“First-aid was there within minutes, and that, I think, is one of the equations as to why we’re talking about non-life threatening injuries right now,” he said. “Kudos to the medical team that was there, and to the frontline officers.”

“We are all hoping for a quick recovery for those injured this afternoon,” he said in a statement.

“It is disappointing and I’m sure a source of anger for more than just me that anyone would carry a gun and discharge it at what was otherwise a joyous celebration.”

Tory said he hopes those who are found responsible “will be held to account to the full extent that the law permits.”

He also thanked the Toronto Police “and others who assisted them for the quick response to today’s most unfortunate shooting after an otherwise spectacularly successful day.”

In the midst of the incident and celebrations, Raptors’ announcer Matt Devlin interrupted Larry Tanenbaum, chairman of Maple Leaf Sports & Entertainment, during his speech to inform the crowd of an “emergency close to here.”