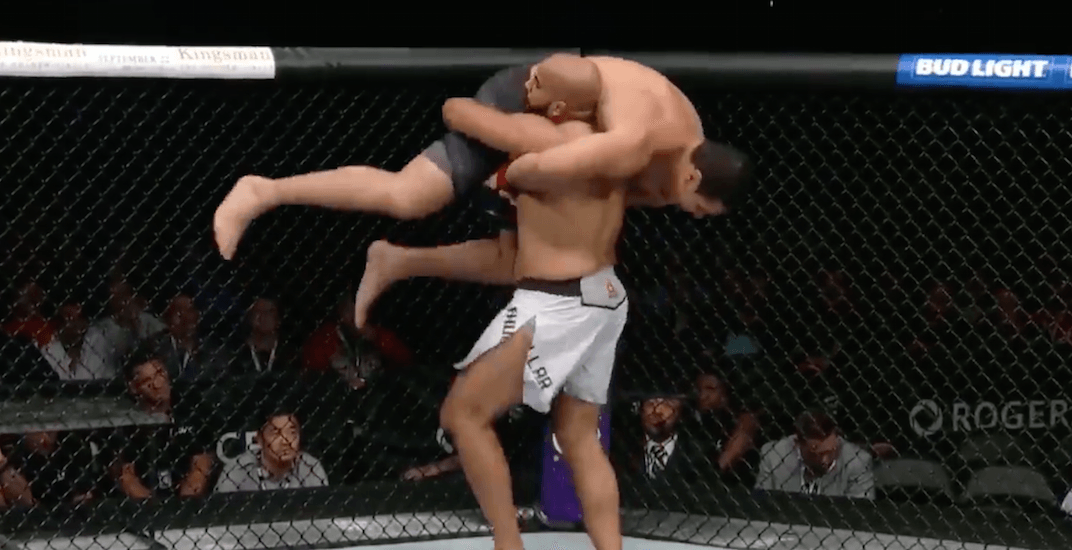 It was a successful UFC debut for Arjan Bhullar.

You knew it would be.

The former Olympian and Commonwealth Games gold medallist in the sport of freestyle wrestling, the Richmond, BC native can seemingly do anything he puts his mind to. On Saturday, he became the first fighter of South Asian descent to compete in the UFC.

The 31-year-old beat Luis Henrique by a unanimous decision at UFC 215 at Rogers Place in Edmonton. It was a fight he says went according to plan.

"Over 1 billion strong. We're coming!" @TheOne_ASB puts on for 🇮🇳 India and puts the heavyweight division on notice! #UFC215 pic.twitter.com/dbNLozMUrJ

“It was amazing, it’s something that you visualize,” Bhullar told reporters after the fight. “From getting my hands taped, to the actual fight, the walk-in, walk-out. Everything went according to how we foresaw it. The fight went good too.

“More than anything it was special to hear that crowd out there.”

Noticeably absent from the Canadian fighter’s walk-in was Jinder Mahal, the WWE star and friend of Bhullar. Mahal, as it turns out, had a good reason for not showing up as planned.

“He gave me a call, he was caught in [Hurricane Irma],” Bhullar explained. “He lives in Tampa, Florida and he’s like ‘you know what brother, I’ve got four different properties down here, I’ve got my dog down here, I just haven’t been able to make peace and leave this.’ So he decided to bunker down there.”

HUGE right hand by @TheOne_ASB drops Henrique, then follows it up with the big takedown! #UFC215 pic.twitter.com/5dMaMtZctF

Bhullar is as proud of his heritage as anyone, anywhere.

“I will proudly represent the Maple Leaf and be the ambassador for over 1.7 billion South Asians,” he said upon signing his first UFC contract. “I fully appreciate the significance of this moment, and understand the seriousness of the task at hand.”

Bhullar spoke at length about who he is and who he represents after the fight. He pridefully says his lineage comes down from the Sikh warriors.

The heavyweight fighter wants to make a difference in the world, beyond sport. That’s why he says he plans to wear a turban to the ring for future fights.

“I want to empower people to be unique.”

Given what Bhullar has accomplished already, it would be foolish to bet against him.