Kyle Archibald is Vancouver’s chic-est sugar dealer. He doesn’t lurk on playgrounds or street corners, but instead stands, by invitation, amidst the well-heeled shoppers at Holt Renfrew in the heart of downtown, selling his handmade namesake marshmallows, Archimallows.

Archimallows, in their myriad of playful flavours (these days it’s Kettlecorn, Cherry Cheesecake, Cola Float, and Mango, among others) and shapes (traditional rectangles and seasonal pumpkins soon to give way to Santas and stockings), are the stuff your pure sugar fantasies are made of. He’ll push a stick through as many as you can handle, and will even torch them on the spot to give you that perfect burnt sugar crackled exterior and gooey interior.

Archimallows may appeal to kids but thanks to their grown-up aesthetic, Archibald says his base demographic is as broad “anyone who enjoys delicious candy.” The Archimallows customer “really appreciates a cute aesthetic and all the work that goes into a product like this,” he adds. “Dudes eat it, older ladies, kids freak out. I’m the sugar man. ‘Have some sugar, guys,'” he teases. “I’m like their dealer.”

Although Archimallows fits in amidst the glass and gloss of Holt Renfrew, Archibald acknowledges the importance of keeping things upscale but approachable. Citing his Manitoba roots, and siblings still living in farm country, Archibald always wants to ensure that the pure joy of his marshmallows can be appreciated by people from all walks of life. 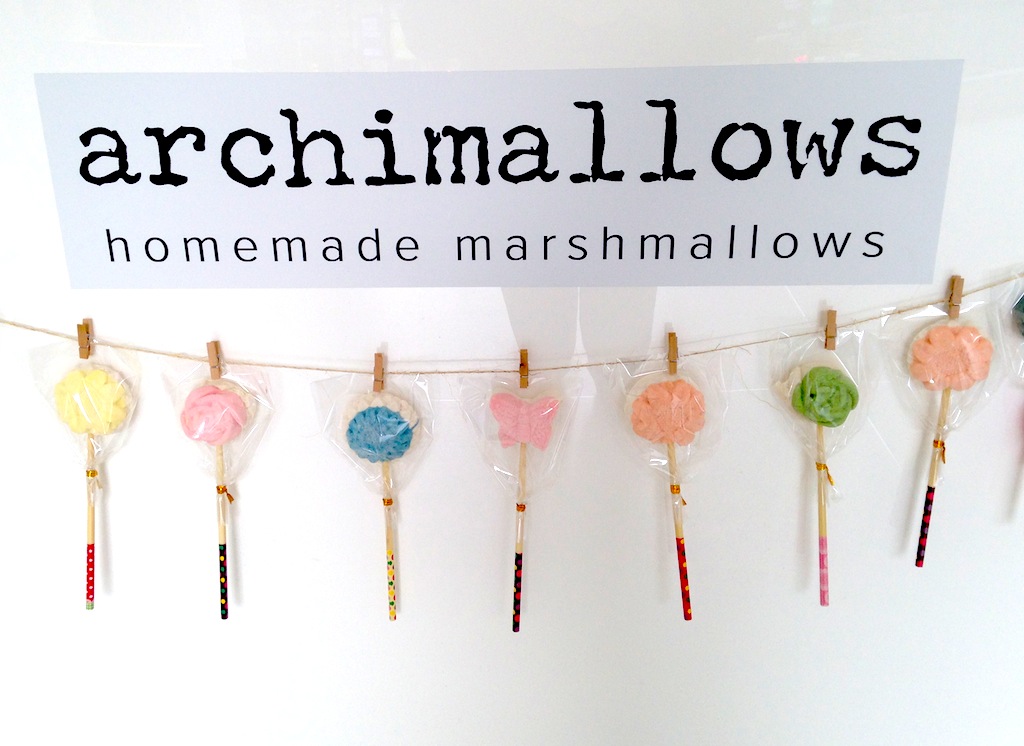 The entrepreneurial candy man takes a break from his pop-up shop located in the glassy sky box hovering over Dunsmuir at Granville–Holt Renfrew pedestrian bridge–and strides, smiling, through the high-end store. Archibald’s at ease here, not only because a repeat residency has him on a first-name basis with the staff, but also because this current-day candy maker used to be in the fashion business, and old habits die hard.

Archibald credits a near-obsessive love of crafting for how he came to be in the small-batch handmade marshmallow cottage industry. Hooked on that gateway drug called Pinterest, Archibald said he’d basically decoupaged every available surface in the Kits home he shares with his partner, and needed a new outlet. A few clicks on the web and he was cutting into trays of pillowy marshmallows that were wrapped up and distributed as holiday gifts in late 2012.

By the next summer Archibald was a regular vendor at the Whistler Farmer’s Market, and his marshmallow mini-empire grew to include the launch of S’mores tables at parties. It’s exactly what one might imagine, or dream of: Archibald will set up a table loaded with marshmallows (or a marshmallow cake), then pair them with the best graham crackers and chocolate he can find, and turn them into that campfire classic, oozing with melty sweet satisfaction.

Archibald modestly calls himself a “one-trick pony” when it comes to his Archimallows. “I love delicious things and I love sugar,” he says plainly. 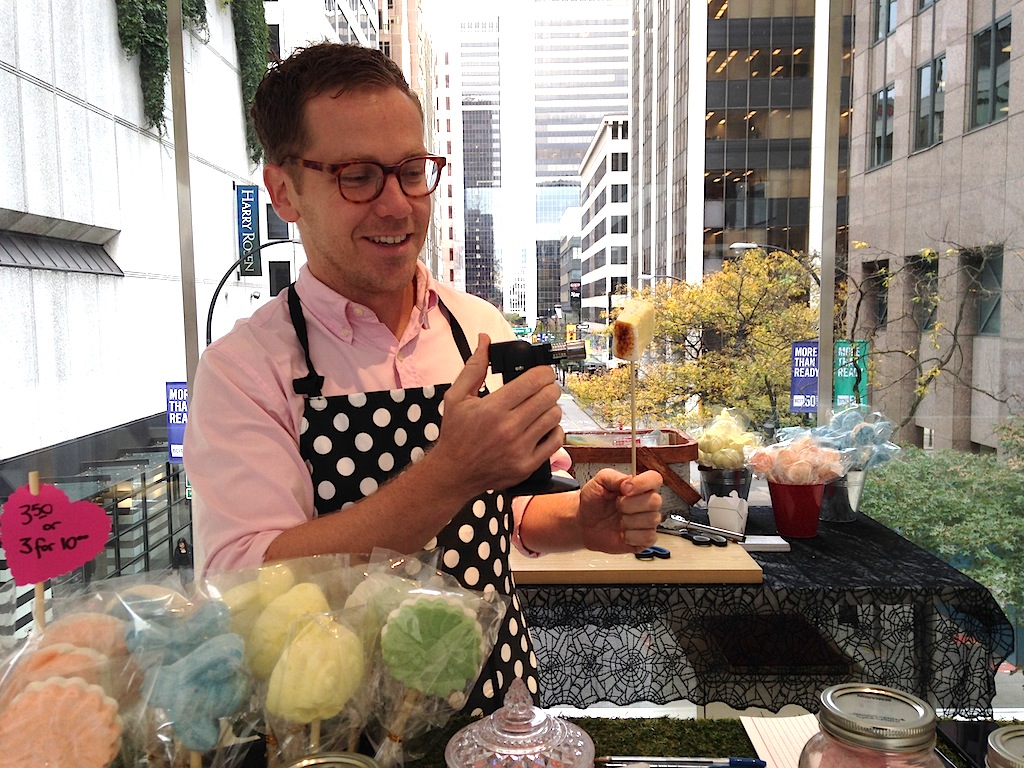 Much like an acclaimed designer like Michael Kors might only wear black tees, blazer and jeans, Archibald is unadorned when it comes to how he talks about his confectionery talents, and instead puts the emphasis on his end result, which is an array of ever-changing flavours and shapes.

Inspired by the seasonality (and need to think a few paces ahead) of the fashion industry, Archibald preps for the months ahead for his “delicious food product” fueled by his love of newness. It’s before Halloween when we chat, but he’s thinking of Egg Nog, and how great a Crushed Candy Cane marshmallow will taste floating atop a mug of hot cocoa.

Archibald is the first to admit he’s not a baker or a trained chef, and he arrived at his core marshmallow recipe through some online searching and a lot of trial and error. He isn’t afraid to make multiple batches to get the flavourings just right, and they have to pass Archibald’s rigorous testing mantra: “I won’t sell anything I don’t want to eat six pieces of.”

One of his newest flavours is Kettlecorn, which came to be thanks to his fondness of nibbling on the sweet-salty snack while watching daytime television. A few flavours haven’t passed the test; sure, lavender or rose sound lovely, but a half-dozen of those in a row aren’t his cup of tea. “You’re only as good as your last season,” he remarks, circling back to a familiar fashion adage.

Archibald, like many of us do with our own work and lives, chronicles his business on Instagram, which allows him to illustrate not only his creativity, but also the evolution of Archimallows. He uses the hashtag #boooooovegetables in the playful spirit of a sugar junkie, but confesses he appreciates moderation.

“For me life is about balance,” elaborates Archibald. “I do Crossfit five days a week, I eat marshmallows, I like salads.”

A similar approach guides Archibald as he expands his business. He now employs a baker to help produce the marshmallows, and he has helpers at his pop-up and at some events (talented members of the arts community in their own right, to boot). He is reluctant to go into wholesaling, unless it’s an opportunity to do “a thoughtful collaboration.” Rather than just ship out his marshmallows to stores all over, he’d prefer to work closely with a merchant to come up with a unique product; a local butcher, for example, may soon feature a Maple Bacon Archimallow exclusively created for sale in his shop.

While things could expand into the meat territory, Archibald also confirms he’s perfecting his vegan (and kosher) marshmallows. A key component in marshmallows is gelatin–an animal product–and Archibald wants to make sure everyone can enjoy his delicious products. “If you’re vegan or vegetarian or kosher you shouldn’t have to compromise taste or anything because of those words. You can still eat a delicious candy,” adds Archibald.

“The endgame for me is probably a marshmallow cafe,” admits Archibald. He describes what the customer would experience, from crossing the threshold to see all the marshmallows on display, a s’mores bar, marshmallow-made goodies like Rice Krispy bars, cozy tables for two with tabletop marshmallow roasting, and non-edible merchandise like hats and shirts. “I just want to be all things marshmallows,” he laughs. He’s thinking the marshmallow café could be a reality by next spring.

In the short term, though, Archibald is looking forward to the December holiday rush, and already has plans in place to be at Richmond’s Aberbeen Centre for Chinese New Year, and hopefully back at Holt Renfrew once again for Valentine’s Day selling. He’ll still be behind the s’mores table or hot chocolate bar at many a party, turning towers of marshmallows, slabs of chocolate, and crunchy graham crackers into warm, comforting treats with the flick of his torch.

Archibald seems to have become Vancouver’s candy man and sugar dealer, and a forward-thinking style-minded business man to boot, but there’s no denying his inherent sense of fun. Says Archibald: “I’m really just the marshmallow guy.” 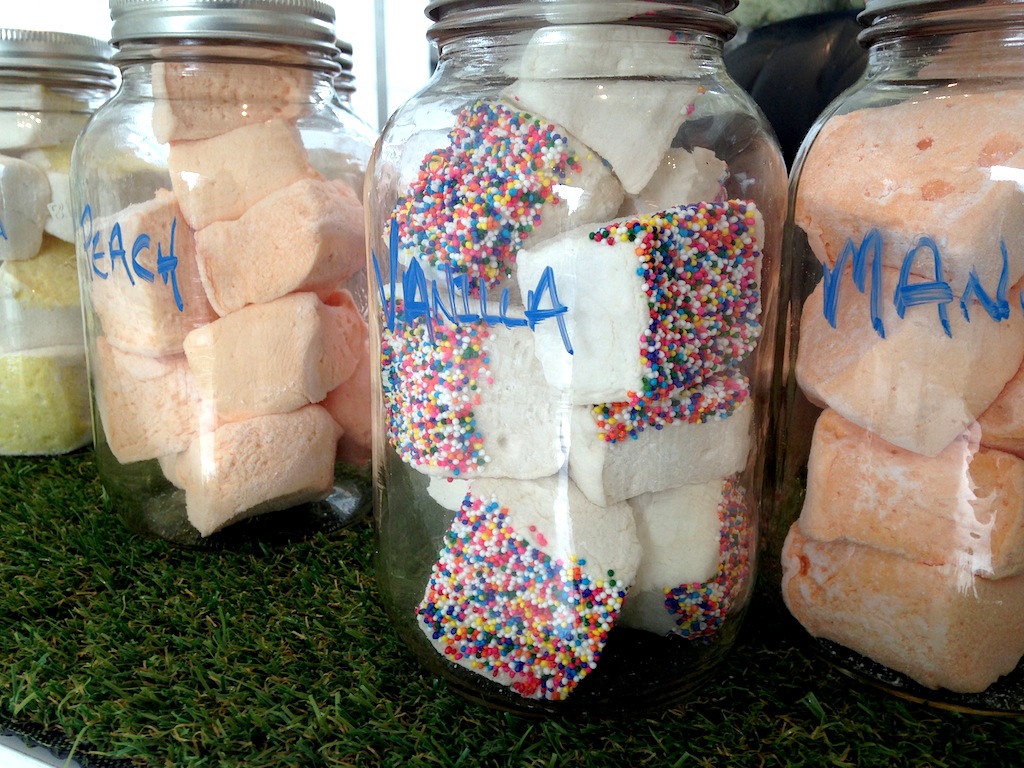 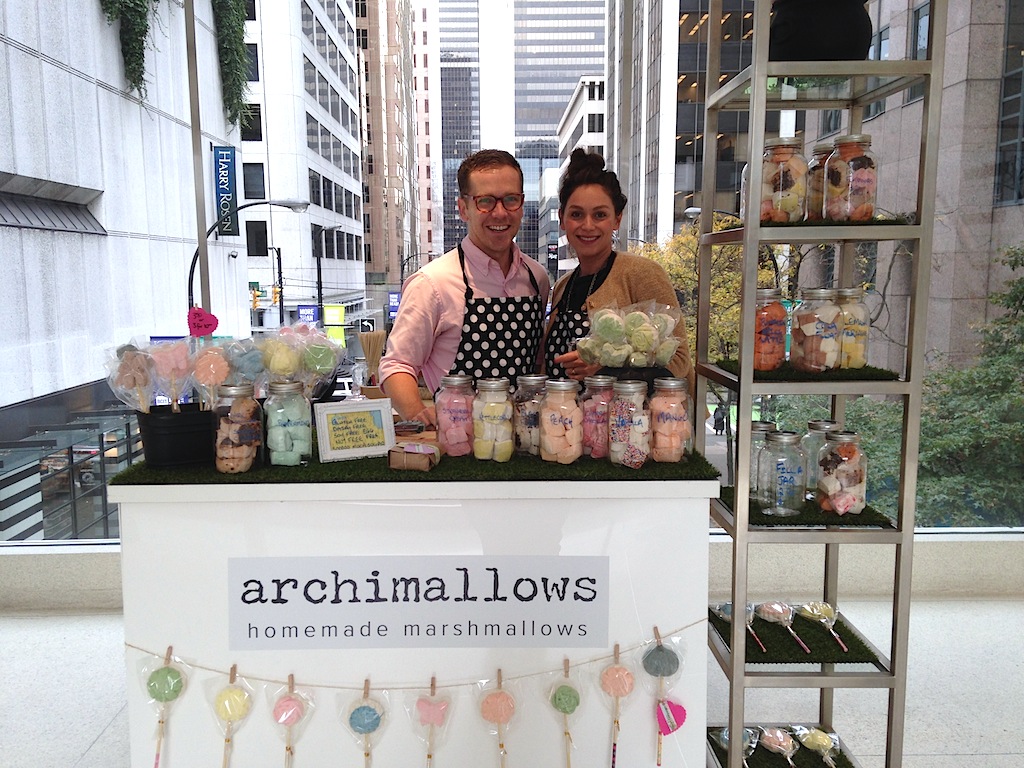 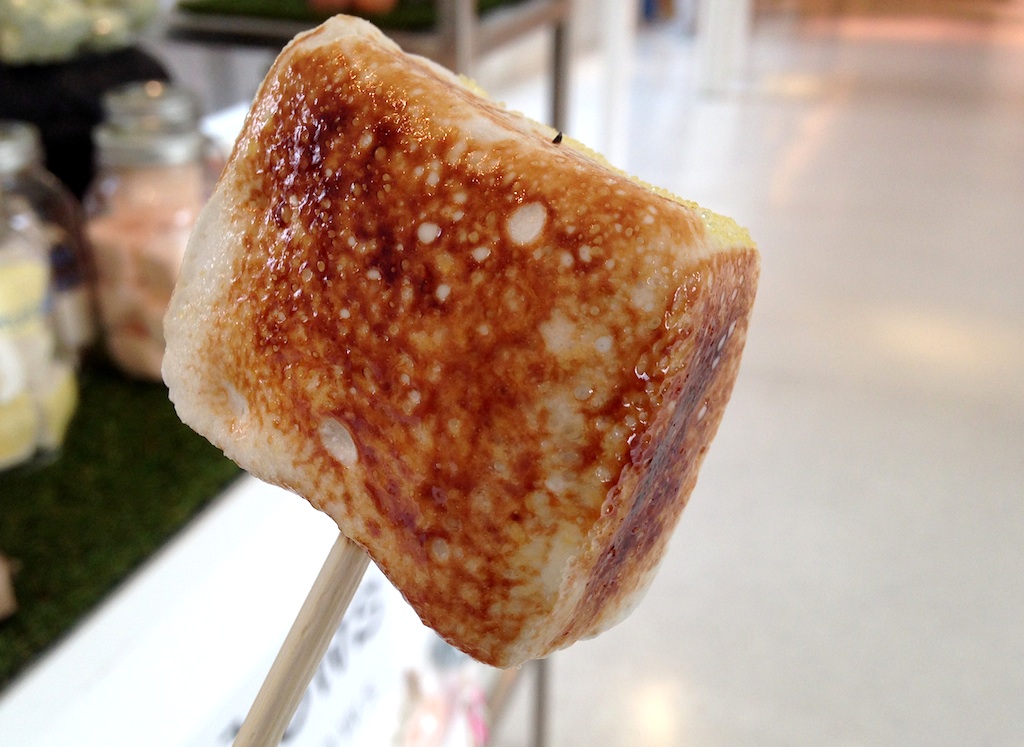