A section of Arbutus Street on Vancouver’s west side has been closed down due to an early morning crash.

Collision investigators of the Vancouver Police Department have closed down the intersection of West 32nd and Arbutus as investigations proceed.

Arbutus from West 32nd Avenue to Quilchena Crescent is closed to traffic in both directions. 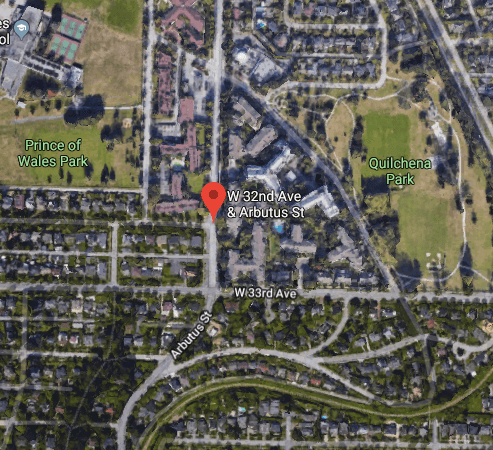 Details have not been made available yet but police have confirmed that the investigation involves a single-vehicle collision that took place in the early morning.

For the moment, transit is being rerouted and drivers are advised to take alternate routes.

Police believe the area will reopen just after 9 am this morning.

Update: The Vancouver Police department has confirmed that the collision has claimed the life of the driver.

The driver, a 30-year-old male from Burnaby died at the scene. The passenger, a 32-year-old from Langley, was transported to the hospital with minor injuries.

Investigators believe that the crash took place just before 3 am.

A white Nissan Versa that crashed was a Modo shared car that lost control and struck a wall near West 33rd Avenue.

Arbutus Street from West 32nd Avenue to Quilchen Crescent remains closed. Speed is believed to be a factor in the collision.

This is Vancouver’s eight traffic fatality of 2018.