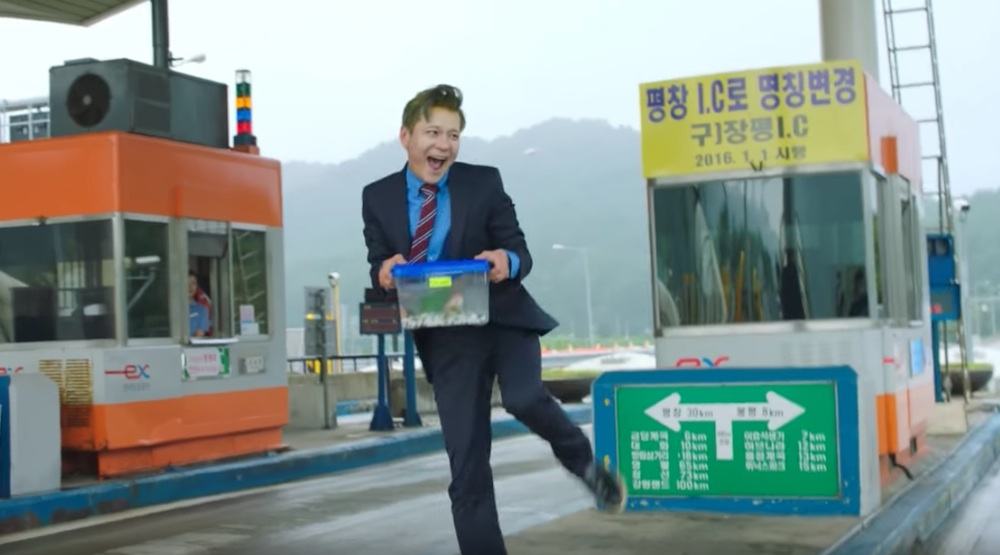 A new video intended to promote the Pyeongchang 2018 Olympic Winter Games within the host country and abroad is packed with all the extravagant randomness that K-pop music videos are known for.

There’s a Conan O’Brien impersonator operating a toll booth into Pyeongchang as a nod to the American talk show host’s recent visit to South Korea, where he was treated like a superstar.

The Korean pastime of ramen eating makes an appearance in between scenes with a pair of farmers and their ox, a Gangnam style-like dance mob, three men bobsledding down a road in a bathtub with wheels, and curling on a vinyl sheet while sitting on an office chair.

Real snow and ice did not make it into the video, which seemed to be more of a parody of the Winter Olympics than a video meant to stir excitement. The video is part of the Ministry of Culture, Sports, and Tourism of Korea’s dance video competition that encourages the public to submit videos of themselves dancing to the song “Arariyo Pyeongchang”, a K-pop collaboration between Juhan Lee of Winterplay and Hyorin of SISTAR.

The video’s description is the following: “In celebration of upcoming 2018 Olympic Winter Games to be held in PyeongChang, South Korea, we hope everyone catches the happy-dancing virus until the game is on!”

While the global virality of Psy’s “Gangnam Style”, named after a neighbourhood in Seoul, remains as a source of national pride for many South Koreans, the feedback from citizenry over the Olympic music video has been almost universally negative.

At the time of writing, the video has about 22,000 down votes and just 500 up votes. One comment on the video, written in Korean, called it a “national disgrace that does not positively reflect Korea” while another read “why not show the real Korea?”

It was published onto YouTube on September 27, but it only caught the attention of South Koreans this week. The number of views on YouTube has more than quadrupled since yesterday to about 1.2 million as of this afternoon.

The launch of the video and dance competition came ahead of the International Olympic Committee’s urge to the Pyeongchang 2018 local organizing committee and local government leaders to quickly raise awareness and generate excitement not only across Korea but around the world.

“Early indicators show that the level of interest from Koreans and stakeholders is low,” said IOC Coordination Commission chair Gunilla Lindberg in a public meeting reviewing the progress of local organizers. “It is essential to raise the profile of Pyeongchang 2018, both domestically and internationally, to generate more interest and enthusiasm. Failure in this area will lead to failure in many other areas, including ticket sales.”

When Vancouver hosted the 2010 Winter Olympics, tourism campaigns by the provincial government and the provincial tourism bureau were anything but outlandish, focusing on attractions and scenery – things typically associated with a tourism video.

In fact, Vancouver 2010 had no official theme song, and the “I Believe” anthem made for CTV’s coverage of the Games became the default theme.

One thing’s for sure, the latest South Korean tourism campaign will get a lot of people talking.