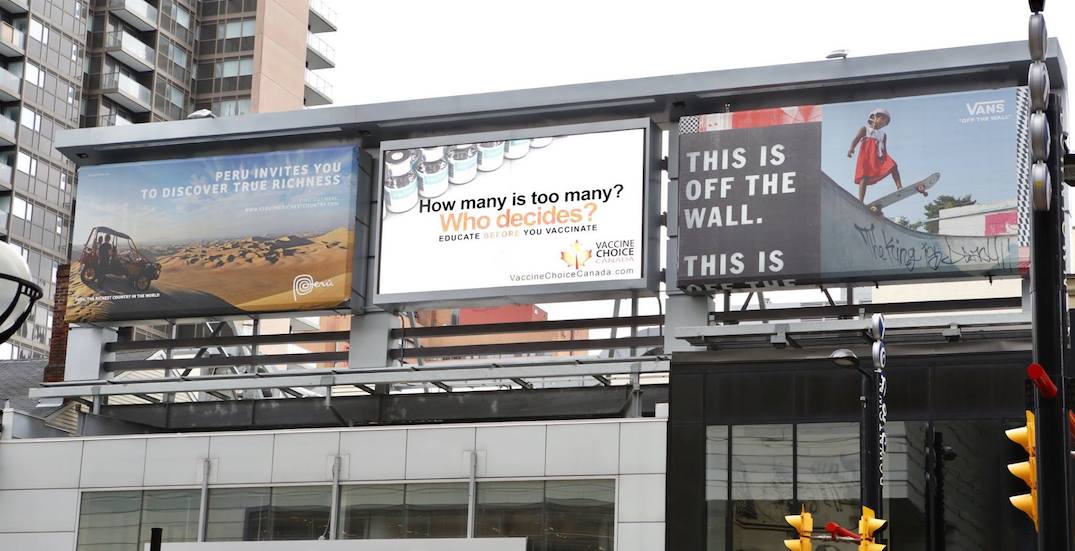 An anti-vaccine group launched a billboard campaign in Toronto last week, and it is expected to run for another week.

According to Ted Kuntz of Vaccine Choice Canada, the campaign began on February 21 and will run for two weeks, rotating on over 50 digital billboards across Toronto.

“Alternating images once every minute until we have no less than two million impressions,” shared Kuntz. “We have these four different images in rotation.”

Kuntz thanked donors who made the billboards possible.

“A huge thank you to our many donors who made this possible. And a very special thank you to many individuals for their tireless efforts in creating the images and doing all of the many, many behind the scenes tasks it takes to make this happen,” he said. “I hope everyone enjoys their driving around the GTA just a little bit more.”

Vaccines have been making headlines recently following an outbreak of measles cases around Vancouver, BC.

BC’s Health Minister Adrian Dix announced yesterday that schools in the province will require the immunization status of all students, beginning this September.

This comes on the heels of an announcement by Vancouver Coastal Health this past weekend, that two new cases of measles had been discovered, bringing the total cases in the province to 13.

“Vaccines are one of the safest and most effective advances that we’ve made in public health to promote health and prevent both infectious diseases and some cancers,” said Dr. Shelley Deeks, medical director of immunization and vaccine-preventable diseases at PHO. “Vaccines save lives and protect us from serious diseases, and the 2015 vaccine safety report reiterates that they are safe.”

“Vaccination programs have been one of the most effective public health programs of the 20th century. Every dollar invested in immunizing our children saves us $16 in healthcare costs,” they said.

Vaccination programs have been one of the most effective public health programs of the 20th century. Every dollar invested in immunizing our children saves us $16 in healthcare costs. #VaccinesWork pic.twitter.com/SwHW5CtMOA